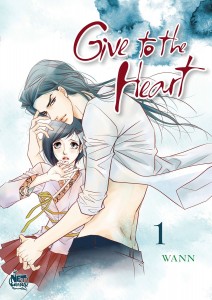 It’s been over three years since Michelle and I published an Off the Shelf column entitled, “NETCOMICS Lives!” A year later, it seemed that our excitement was perhaps premature, as new chapter releases dwindled and the company’s social media accounts went dark. But this year, once again, we’ve seen signs of life! I’m a bit late realizing it, myself. When, just yesterday, the NETCOMICS Twitter account suddenly favorited two old tweets of mine from 2012, I headed over to the website, only to find that not only had NETCOMICS attended Anime Expo this year, but they were also releasing a new print series, Give to the Heart, the first volume of which was just released this week!

Give to the Heart is written by Wann, an artist I’ve had mixed experiences with (see 100% Perfect Girl), but her series So I Married an Anti-Fan was one of the charming new series Michelle and I got so excited about back in 2011, so I can’t help but feel optimistic. Most notably, as I mentioned, Give to the Heart is being released in print which I admit I far prefer over the company’s only other current method of distribution—its chapter-by-chapter, short-term rentals. 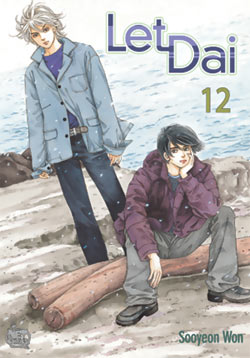 I still deeply regret not picking up all my favorite NETCOMICS series in print when they were available. In fact, one of my tweets that NETCOMICS recently favorited was this from February 9th, 2012: “Random wish–I read all 15 volumes of Let Dai digitally at @NETCOMICS… kinda wish I owned the complete print run. Volumes very $ now, tho.” Honestly, this is still true, perhaps even more now than it was in 2012. The longer I’m a fan, the more careful I am about keeping my personal print collection relevant and manageable, but it is series like Let Dai—epic fantasies (romantic or otherwise) with memorable characters and lovely artwork—that I most long to keep around.

Not only that, it’s exactly the kind of series I’d be pleased to share with my teen students, as it’s both the strengths and flaws of a series like this that make it something I’d have enjoyed most when I was a teen. If I enjoy it as an adult despite its excessively violent and melodramatic nature, I’d have loved it for exactly those things when I was twelve or thirteen. For this reason, I’ll likely pick up the print volumes of Give to the Heart as they become available, just in case it might become a source of later regret.

So what am I getting at here? What are my 3 things? Okay, here we go:

3 NETCOMICS series I wish I owned in print:

1. Do Whatever You Want | Yeri Na Oh, English-language publishing has been so cruel to Yeri Na. While I’m happy to have been able to read this series in its entirety on NETCOMICS’ site (a fate much kinder than that of Drama Queen’s ill-fated license for Peter Panda), a short-term rental just really can’t do this series justice. Like Let Dai, it’s a series that deserves a long shelf life, being re-read and shared and discussed in squeeful hushed tones between teens (or adults who still remember being teens). This is a terrific title that ends up being both deeper and larger in scope than it might initially appear. I own the first three published volumes, and they do sit happily on my shelf. I would dearly love to be able to add the remaining four. Pipe dreams… pipe dreams. Note: This same, unfinished fate also applies to Roureville.

2. Full House | Sooyeon Won – From the same gloriously over-the-top mind that brought us Let Dai, Full House was rescued from its original doomed publication by the defunct Central Park Media, and thankfully brought to us in its entirety to us via NETCOMICS’ digital platform. Unfortunately it remains in that format only. From my review of the second volume: “Though this series is, frankly, stunningly predictable, to leave it at that would be a grave oversimplification. Manhwa-ga Sooyeon Won has an extraordinary talent for turning romantic cliché into storytelling gold … Her secret to this is brazen excess, which in this case applies to the series’ endless stream of classic screwball comedy banter—precisely the thing that makes the story so much fun in the first place.” We wants it, precious… ON OUR SHELVES. *weep*

3. Small-Minded Schoolgirls | Toma – This three-volume series is the only one on this list that has never enjoyed a print run, and while I certainly understand the (apparent) difficulty in marketing comics for adult women, this truly is a shame. This unsentimental comic was one of my favorites in 2009, and remained so through the end of its run on NETCOMICS. Its idiosyncratic art style and fantastic female characters belong on my shelf next to Moyoco Anno, Natsume Ono, and Fumi Yoshinaga. What a wonderful collection that would be! Out of all the titles on this list, Small-Minded Schoolgirls is also the one I’d recommend most fervently to new readers. Its length makes it a low-cost, low-committment option at twenty cents a chapter (you can read the entire thing for under $3). It’s really a crime *not* to read it!

Of course, while I can avoid blame for not owning these non-existent volumes in print, will I ever recover from my lack of foresight in failing to buy Let Dai? Probably not. How about you? What NETCOMICS series do you wish you owned in print?