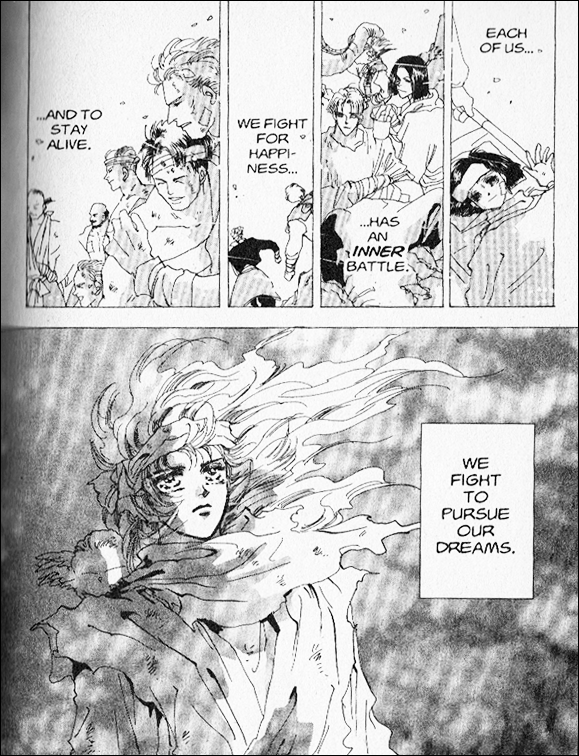 I’ve recently offered up my personal manga/manhwa library (completely with photos & titles on Facebook) as a resource for my teen students who might wish to begin reading manga, or to dig into older/rarer series that they may never have heard of. This is my second attempt at such a thing, but now that I actually have a couple of students who already read manga, I’m feeling more hopeful about spreading the love for Japanese and Korean comics. And to help things along, I thought I’d try spotlighting some of these series that may be new to young fans. I intended this as a series of Facebook posts, since that’s where I most commonly interact with my students via social media, but I thought I’d also duplicate it here, particularly for newer and/or younger manga readers, who may not be familiar with titles we’ve all talked about in the past.

To that end, my first spotlight will shine on Yumi Tamura’s BASARA, a 27-volume shoujo manga that ran in Japan from 1990-1998. Friends in the industry will know that there is pretty much nothing I love more than late 1980s – early 1990s shoujo, and Basara is a particularly precious gem from this period. Basara is an epic fantasy set in a post-apocalyptic world, in which Japan has been divided into several regions, each ruled by a king from the same cruel and corrupt royal clan. The story revolves around Sarasa, a 15-year-old girl from the poorest of these regions, whose twin brother, Tatara, is prophesied to be the “child of destiny” who can free their people from tyranny. When Sarasa’s village is destroyed and her brother murdered by the Red King, Sarasa takes on the identity of “Tatara” in order to keep the prophecy alive and seek revenge on the Red King. The series chronicles her journey through her ravaged country toward her final battle with the Red King, but more importantly, it chronicles her journey as a young woman in a world where she’s valued primarily for her identity as a man.

While I was initially dismayed by what I perceived as an unfortunate focus on romance in this series, I eventually came to view it not only as a decidedly feminist tale, but also an anarchist narrative that was more compelling than I ever expected. Here, I’ll let my articles here on Manga Bookshelf do the talking. (Yes, there are spoilers. But for a story like this, the plot itself is less the point than how it plays out. Decide for yourself how you feel about that.)

More than this, though (or perhaps *because* of this), Basara is engaging, beautiful, and incredibly moving as an epic fantasy. If you doubt at all the emotional power of this series, I should mention that I’m tearing up just *skimming* that article I wrote over a year ago. For more reading (and even more spoilers), here is the 10,000-world roundtable I participated in during last year’s Yumi Tamura Manga Moveable Feast.

Or for something a little more fannish: try this essay on why Basara’s Blue King demonstrates what JK Rowling could have (and *should have*) done with Draco Malfoy,

Even if you don’t want to read the spoilers, go look at some of the beautiful artwork. It is undeniably drawn in an older shoujo style, but I’ll take this over current art trends any day. I mean, seriously. THE EMOTIONS.

If you like epic fantasy with a fantastic female protagonist, Basara is for you. But, honestly, I think it’s something everyone should read. I’m totally serious. BASARA IS THE BEST. Your life will be made richer by it, on multiple levels.

This has been today’s Manga Spotlight! Enjoy!