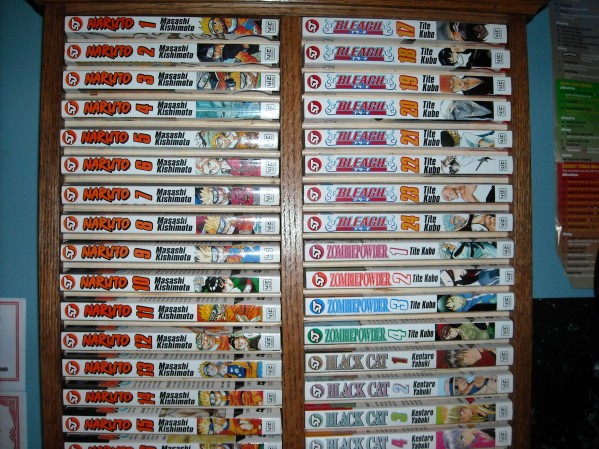 Something tells me this image fits this post perfectly. Don’t know what it is though…

The basis of this post is much, much thanks to Deb Aoki of Manga Comics Manga & The Comixverse’s Zedric Dimalanta. It’s a simple question to ask: should bookstores start categorizing manga by genre/demographic?

First, the main topic that Deb had noticed from her responses to her twitter query:

HOW CAN I FIND WHAT I’LL LIKE WHEN IT ALL LOOKS THE SAME?

How manga is shelved in bookstores and comics shops can definitely make discovery of new titles difficult for readers who want to get into manga. Having all manga titles shelved alphabetically by title and not by genre is kind of like going to a record store and finding all the jazz, rock, electronic dance music and classical records organized alphabetically by title. Yo Yo Ma, next to Yo La Tengo, next to Yngwie Malmsteen. I know that’s how things are, but it’s not helping new readers get introduced to manga, that’s for sure.

Then what prompted me to write this post was this response by Zedric to the question above:

Especially salient, I think, is the point the article raises about the way many booksellers and comics shops display their manga offerings on store shelves alphabetically, with no real regard for genre or intended reader demographics. It’s a system that perhaps works for the well-informed customer who already knows what he or she is looking for, but for the manga-curious shelf browser and casual shopper, it isn’t an optimal path for discovering new manga titles to explore given the multiplicity of subject matter and themes found in manga and the confusion that variety might engender.

It raises a good point that as a current manga buyer, I never considered to think about. After all, I would know what manga I would want, follow the alphabet, and find what I’m looking for.

The idea of having bookshelves shelve manga by genre/demographics has its pros and cons:

1) As more experienced manga buyers/readers, we obviously know what manga we are looking for, so having everything changed to inform new readers of whether it’s for kids, adults, etc shouldn’t affect us.

2) It puts the correct and proper demographics together, so all the shounen (boys) manga would be in a spot where you can easily find it and, as long as that’s alphabetized, should be no trouble to find at all. Heck, that might honestly be a boon for seinen (16 and up) titles, since that’s apparently a demographic that doesn’t sell well over here.

1) The biggest issue is relying on bookstores to properly shelf manga series. It’s still 2014, and yet there are bookstores (well, B&N at least) that manage to not even alphabetize manga normally. That’s not the main issue, however. What is an issue is will bookstores even understand what manga is, or at least get the basics of it? Aside from Shojo Beat and Shonen Jump, no other manga is labeled with the demographic they’re listed as. So for those that aren’t familiar with those, it can be a problem.

2) Then the next issue after that is by labeling it for kids, for boys, etc, that’s a good way of alienating a potential reader if it’s targeted to one crowd. New readers will most likely stick to one section and not want to bother with the other section. If you keep the actual manga demographic (shonen, seinen), there’s a good chance a new reader might not know what that is. (And as said above, the bookstore.)

In the grand scheme of things, I wouldn’t mind this type of change, if only because having things in order isn’t always the best thing. In the case for manga, it might be nice to have certain sections (though how to label it will probably be an issue). But I’d like to ask you all: should bookstores cater to a demographic/genre shelving or should it just stick to being alphabetical? What do you think would be the benefits or concerns of doing something like this? Whatever you have, feel free to share your thoughts!

Justin is the Founder of Organization Anti-Social Geniuses, a blog that tries to look behind the scenes of anime and manga. You can follow him on Twitter as he attempts to go through his bizarre anime backlog adventure. And yes, title possibly related to a shounen series done by Araki-Sensei…