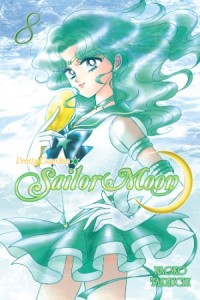 And the hits just keep on rolling in this volume. After the hellfire brought down by the destruction of, well, the whole district, the Sailor Senshi find themselves facing down the remains of Hotaru’s body as it takes on the form of one of Pharaoh 90’s creatures. Meanwhile Chibi-Usa’s body remains in a critical condition. If they’re not going to be destroyed by this creature, then the newest member of the Senshi, Sailor Saturn, will finish them off.

On one hand, I’m fine with this volume because we finally get to end the ridiculous Pharaoh 90 story arc. I know I should expect these arcs since they are the meat and potatoes of the whole gig. But I find myself trying to invent reasons to be excited about them. I suspect it’s the fact that, after eight volumes, I want something else to happen. I want some kind of overarching villain to appear; I want some kind of “There’s a reason all of this is happening.” But every time, the Senshi just battle just another group who want to suck the energy/emotions/blood/flesh or whatever other substitute the story requires out of people to go to Valhalla/Eden/7-Eleven or whatever other substitute the villain requires. I swear to Jiminy nobody even says out loud that it’s awful suspicious that all these groups keep attacking the girls and don’t seem to have an overarching agenda.

I don’t know, readers, I feel like I am not skilled enough to figure out the appeal of watching the same fight happen to the same team in every volume. Yes, the appeal is that the gang gets to have an adventure, but it’s getting kind of repetitious. I want to know more about the team—yes, even Usagi. We do get snippets, but for the last few volumes there seems to be some kind of attempt to answer the question of what happens when Chibi-Usa goes back home to the future? Takeuchi is going for an idea of domesticity between Mamoru, Usagi and Chibi-Usa. But it only comes out when there’s no fighting going, so you can pretty much guess how often this happens.

What is weird about reading this volume, and indeed the rest of the volumes, is that I want something closer in tone to Codename: Sailor V than what’s presented here. In Sailor V, when Minako had to fight a different foe, at least it wasn’t relentless. Foes, who are about as thin as anything that Sailor Moon comes up with, were dispatched, sure. But at least it was over and done in two volumes. This has been going on in Sailor Moon for eight volumes and I really hope that things change in the run up to the end.

So at the halfway point in the volumes, am I happy? Well, yes and no. On the one hand, I’ve gotten to watch as Takeuchi paints a pretty epic canvas taking ordinary girls and making them responsible for people’s safety, even those they don’t know. I never get a sense that they don’t take their duties seriously. As they struggle to beat every adversary that stands against them, they have their moments of indecision but they always overcome them and find inner resolve to succeed. I’m a sucker for story dynamics like these. Plus for all her insufferable points, Usagi is a good leader who cares about her flock.

Where the series lets her down is when she reverts back to type and becomes an airhead after saving the world. I could buy that for the first couple of volumes but now I have to wonder if the author is deliberately sabotaging her lead because if she became more confident then there wouldn’t be much tension. The only way to stop that would be if the author actually wanted to make the kinds of changes that would simultaneously improve and ruin the tempo already set. Heaven and hell, I suppose.

On the other hand, the series seems to be incapable of letting the story go out on a limb and have more serious stakes. When the characters risk their lives, I’m never in any doubt they will make it through. When Mamoru was facing against his old friends, there was a real sense of danger and the gang had to fight to save themselves from being destroyed. But now it’s become so par for the course that I’m not even worried about them.

The team really must work on their tactics because they get hit again by the bad guys and spend a good portion of the initial battle—you guessed it—knocked unconscious. I shouldn’t be surprised, but still I have to stare at the page and say “What, again?” The promise of the Outer Senshi returning for the next volume intrigues me as their departure from the roster is not done with any finality, but in a manner that suggests when they do return it will be interesting to see how the Inner Senshi treat them.

Again, I find myself locating genuine problems that I have with the series, but they are not enough to stop my enjoyment of the proceedings. My worry is that when the final volume comes, it will be another cases of fighting yet another unknown boss and then that’s it, we’re out of time here folks.