Welcome to the June installment of BL Bookrack! This month, Melinda and Michelle take a look at two debut series from SuBLime Manga, Blue Morning and Sleeping Moon. In Brief: Help! God of Love and KINE IN! (DMG). 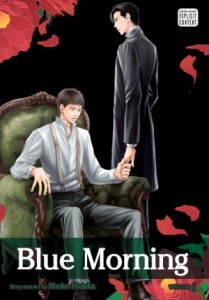 Blue Morning, Vol. 1 | By Shoko Hidaka | SuBLime | Rated M (Mature) – One word that I keep seeing used regarding Blue Morning is “psychological,” and much as I would like to say something new about the work, this label really is inescapable.

Akihito Kuze is the son of a viscount, but spent the early years of his childhood living away from Tokyo with his sickly mother. When his parents die six months apart, ten-year-old Akihito inherits the title and moves to the Kuze estate, where everything is capably managed by a cold young man named Tomoyuki Katsuragi. Akihito is instantly in awe of Katsuragi, but the latter shows the child neither warmth nor sympathy, but instead piles on the studies and repeatedly informs Akihito that he must be perfect in order to carry on the Kuze line. Akihito does his best to comply, and, as he grows, eventually develops an obsession to make Katsuragi notice and approve of him.

There’s a lot of really complicated and interesting character work going on here. Akihito’s early fascination with Katsuragi makes sense, given that he seemingly lived his early life mostly among women, as does the eventual evolution of his feelings. Katsuragi’s treatment of the boy makes sense, as well, once readers learn how the man came to be in the Kuze household in the first place, and the lengths to which he went to emulate his former master, while Akihito is going about, being his own person without a care. My one complaint is that a conversation about Katsuragi’s true parentage doesn’t make much sense, but perhaps it was meant to be cryptic and will be clarified in future volumes.

Complex, dark, and a bit twisted, Blue Morning is the best BL I’ve read so far this year. And, as if that weren’t reason enough to celebrate, this is a continuing series, with volume two due out in August! 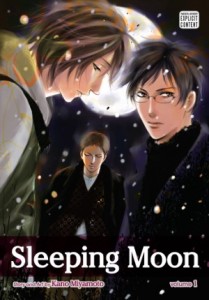 Sleeping Moon, Vol. 1 | By Kano Miyamoto | Published by SuBLime | Rated Mature – Akihiko’s life has been long haunted by a curse said to kill his family’s male descendants at an early age. Though his own father unsuccessfully attempted to escape his fate by leaving home, the curse brings Akihiko, now nearing thirty, back to his roots to search for answers.

Using his research in comparative religion as an excuse to visit his family’s ancestral home, Akihiko is confronted both by the awakening of his inherited paranormal abilities and the awakening of his heart, as he finds himself drawn to two very different men. The first of these is Ren, Akihiko’s free-spirited but lonely cousin who shares his ability to see ghosts and other supernatural beings. The second is Eitaro, a young man living 100 years in the past, whom Akihiko visits in his dreams, and who bears a striking physical resemblance to Ren.

The premise I just described could so easily be the worst kind of supernatural romance, filled with overblown psychic powers and cross-generational mistaken identity. Fortunately, in Miyamoto-sensei’s capable hands, it is instead the best kind.

Akihiko’s reception in his family’s home is the kind one encounters only in stories of old, well-to-do families—an odd mix of unquestioned acceptance and extreme discomfort. That, together with his supernaturally-based connection to his cousin reminds me of nothing more than Mary Stewart’s Touch Not the Cat, a favorite novel from my teens.

This sort of strained (but undeniable) intimacy between people who’ve met only at distant family functions creates an immediate sense of history and makes relationships that spring up too quickly feel somehow perfectly natural—a decided advantage in this kind of romance. In particular, Ren’s desperate need to connect with someone, anyone, who shares his fate feels urgent and genuine, helping to ground the series despite its supernatural premise. Miyamoto’s artwork is a highlight as well, nicely capturing the sense of both past and present haunting Akihiko’s every move.

The second (and last) volume of this series is due out in September, and I admit I’m quite anxious for its arrival. Highly recommended.

Help! God of Love | By Tsukiko Kurebayashi | Digital Manga Guild | Rated Mature (18+) – One of the great things about the Digital Manga Guild is that it’s in a position to make available a lot of manga that would otherwise never see any kind of English release. This has resulted in the discovery of hidden gems like Climb On To My Shoulders, and expanded the English-language catalogues of talented authors like est em (KINE IN!) and Keiko Kinoshita (You & Tonight). Unfortunately, there are untranslated manga that would be better left alone. This is one of those manga. Between its ultra-contrived melodrama and underdeveloped relationships, Help! God of Love is one of the most poorly constructed BL manga I’ve read to date, a circumstance not at all helped by its occasionally awkward English adaptation. Not recommended. – Melinda Beasi

KINE IN! | By est em | Digital Manga Guild | Rated Young adult (16+) – I’m always up for anything by est em, and even though the first thing I read by her—Seduce Me After the Show—remains my favorite, there is always something worthwhile to be found in her other works. I’ll admit that my faith was a little shaken by the opening chapters of KINE IN!, which revolve around a high school love triangle, but est em returns to form with the unrelated short stories that round out the volume. My particular favorites are “The Scenery of That Summer,” which is about a pair of step-brothers that meet for the first time for a funeral, and “The Salvia and the Barber,” in which a pair of sixty-year-olds decide to live together as family. Both stories are poignant and offer only a suggestion of romantic feeling. In fact, this entire volume is very chaste indeed, probably due to a recurring theme of love postponed. Definitely recommended. – Michelle Smith