I’ve never seen any of the TV adaptations of The Duke of Mount Deer, but I do like the opening song of the version starring Tony Leung and Michael Miu.

Hey, I Know That Place!

I have never been to China. While I know where places like ‘Beijing’ are, a lot of the action in these stories takes place in rural areas I’ve never heard of. Likewise, my knowledge of Chinese history is very, very basic, so when certain prominent historical figures pop up I know little, if anything, about them.

But while I’ve never been to China, I have most definitely been in Taiwan (I’m in Taiwan now).

This novel has many references to Taiwanese history and places in Taiwan, and eventually our protagonist even goes to Taiwan.

Furthermore, I read part of the novel in Penghu, which was a stronghold of Shi Lang, one of the characters in the novel. So, while I was reading about the fictional Shi Lang, I was learning about the historical Shi Lang by wandering around his old stomping ground. 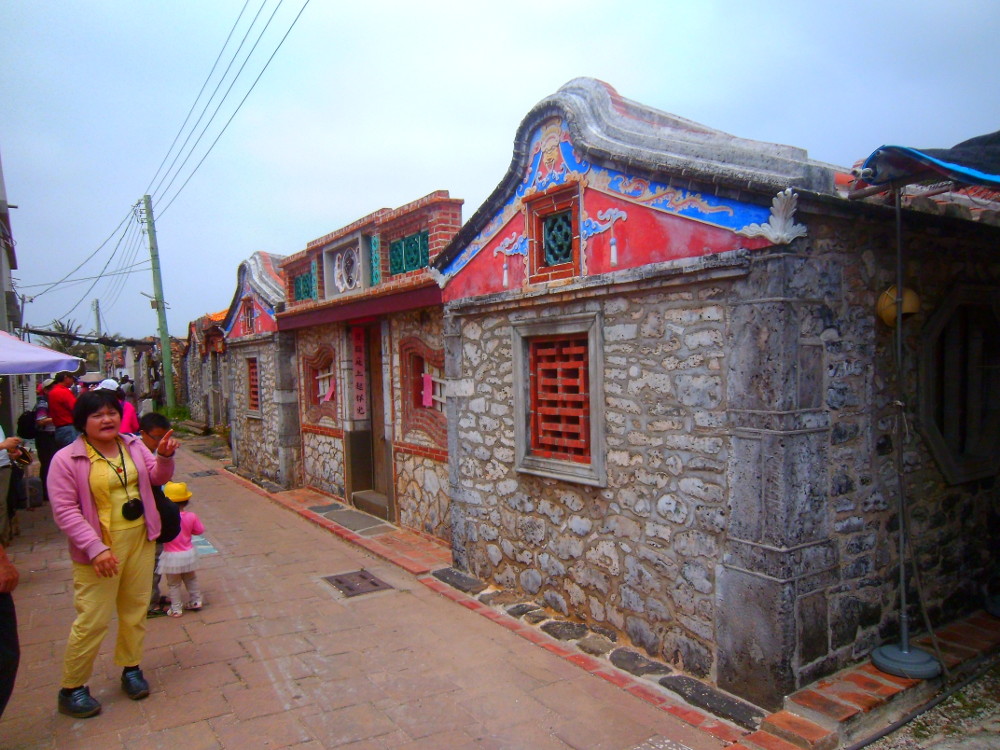 This village in Penghu was around when the events of this novel took place.

So, for once, not only did I understand a lot of the historical references being dropped and know quite a few of the places being mentioned, they were mentioning places which I have physically visited and have vivid memories of. For example, at one point Wei Xiaobao thinks about five concubines of King Ningjing. I have visited the temple dedicated to the five concubines, and seen the very wooden rafter where they hung themselves.

I had not expected to see places I’ve been to in my travel around Taiwan to pop up in a Jin Yong novel. It’s exciting to see a bit of one’s life represented in fiction, and it made my reading experience even richer.

Something that comes up again and again in Jin Yong stories is 2-8 characters going to an island where they live together in isolation from the rest of humanity. Or maybe they go to a remote mountain instead. This is the happiest part of the characters’ lives, and if/when they leave the island/mountain, they suffer.

In other words, happiness is setting up one’s own isolated micro-society, while people living within a huge, hierarchal society are doomed to suffer. There, I’ve just summarized about 5000 pages of fiction.

(this section contains some spoilers for this novel)

But there is one protagonist who is not happy with living on his own island, namely Wei Xiaobao.

It is then said that Wei Xiaobao can only be happy in a bustling city, such as Yangzhou or Beijing. But I wonder, is that really it? He seems happiest when he’s with his friends. If his friends were on the island with him, would he be so unhappy?

In any case, I find it interesting that Jin Yong subverts his own island/mountain fantasy. 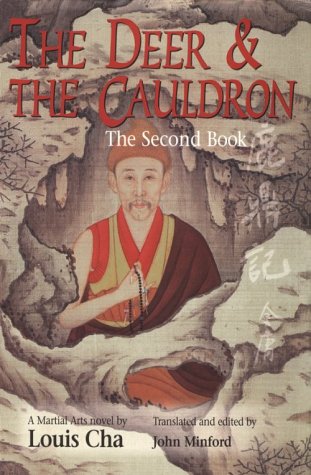 Not a Good Person

Jin Yong has received many complaints from readers about the novel because the protagonist is … not a good person. Jin Yong’s response is that protagonists don’t have to be ‘good’, his novels are not supposed to be morality textbooks, and nobody is completely ‘good’ anyway. He does say to any impressionable people who may read the novel that Wei Xiaobao’s loyalty to his friends is a virtue, but aside from that, his behavior should not be imitated.

I like to pride myself in being someone who wants complex characters with shades of grey and all that … yet Wei Xiaobao also frustrated me. Which makes me realize that I also like to sort characters into ‘good people’ and ‘bad people’, much as I don’t like to admit it.

Wei Xiaobao simply does not fit in the ‘good person/bad person’ dichotomy. He some some horrible things in the story, and never regrets them, let alone apologize for them. He also does some good things at personal cost to himself. At times I would be cheering him on, and then think ‘wait a minute, I’m cheering on the guy who did [horrible thing].’ And then there were times when Wei Xiaobao was suffering, and I would think ‘that’s not fair.’

Many of Wei Xiaobao’s ‘bad’ features are actually him living out fantasies we are not comfortable to admitting we have. For example, he is too lazy to study, and always finds clever workarounds for actual work. Many of use would love to have the benefit of work being done without doing the work ourselves. And while I personally do not have fantasies about having sex with a harem of beautiful women, based on some of the search results I’ve gotten, this seems to be some people’s favorite part of the story.

I have Asagi from Basara on my mind lately (thanks, Melinda) and even he fits in the good person / bad person dichotomy. He’s a bad, broken person who becomes a good, healed person. Wei Xiaobao, however, is not broken – in fact, he is the least angst-ridden of all Jin Yong characters. While he does grow up over the course of the story, whether he becomes a ‘better’ person is open to debate.

To a large extent, Wei Xiaobao is just adapting to his environment. He often gets rewarded for lying and cheating, so he lies and he cheats. He grew up around people who treat young women as sex objects instead of as people, so he treats young women as sex objects instead of as people (though he gets a little better about this towards the end of the story). Older women tend to shower affection on him when he flatters and papmers them, so guess what, he flatters and pampers older women. His friends express their gratitude when he tries to help them, so he tries to help his friends. While Wei Xiaobao is individually repsonsible for his actions (especially since it is demonstrated that he CAN resist his social conditioning), to a large extent, his virtues and flaws are reflections of the society he lives in.

What a vexing character.

Wei Xiaobao and His Mother

(this is mildly spoilerific)

For most of the novel, Wei Xiaobao hardly thinks about his mother at all, and he certainly does not wonder how she’s doing. Finally, he returns to Yangzhou and sees her. From her point of view, her young son had disappeared years ago, and no matter how hard she searched for him, she couldn’t even find a clue about his whereabouts. She is understandably extremely upset about his long absence, and makes sures Wei Xiaobao knows it. At the same time, she is overjoyed to know that her son is alive and well. Wei Xiaobao also observes that she is getting older, and that some day she will need somebody to take care of her.

At first, this encounter doesn’t seem to change Wei Xiaobao, but looking back, that was a major turning point in his development. Before their reunion, Wei Xiaobao has a very self-centered lifestyle – everything is about making himself safe, comfortable, and happy. After being separated from her again, Wei Xiaobao actually misses his mother, and worries about how she is doing. And it’s not just his mother – Wei Xiaobao starts considering how his actions affect other people, not to manipulate them, but because he starts to care about their well-being. He realizes that there are people who depend on him. And thus his carefree existence is finished.

This is actually not unlike my own life. I haven’t seen my own mother in years, unless you count the *one* conversation we had over Skype last year, which incidently was the only time I talked to her in all of 2012. She would probably count that, for she said was that it was so wonderful to see her daughter’s face moving and smiling again after having not seen me for so long. Though I don’t think my behavior is nearly as harmful as Wei Xiaobao’s, I am currently living a self-centered life myself. I am only taking care of myself, and though Wei Xiaobao and I do very different things for fun (well, we do have ONE passion in common – live theatre), we are both trying to please ourselves to the greatest extent feasible.

I consider my eventual reunion with my parents to be the end of my carefree existence, for I see that, between my parents and myself, the direction of the caregiving is going to reverse. One reason I value my current self-centered lifestyle is that, by my reckoning, I will never be able to live like this ever again.

This novel has been published in English as The Deer and the Cauldron by John Minford. I haven’t read any of it myself, but this translation gets very, very mixed reviews. Currently, it’s out of print and expensive, so I suggest borrowing it from a library. 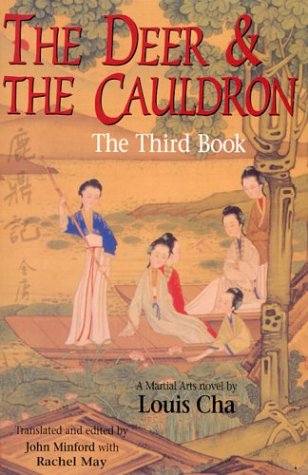 There is also an incomplete fan translation by ‘Foxs’. I’ve looked at it, and it’s very literal (on purpose, according to Foxs). It’s not the smoothest reading experience in English, but it’s close to the original Chinese. Some people say that the best way to read The Deer and the Cauldron in English is to read the Minford and the Foxs translations side-by-side.

If you can get the Minford translation from a library, or get the novel in a language you understand by some other means, then this novel needs to be on your reading list now (caveat: I am not going to blame people who avoid the novel because of the sexual abuse it depicts).

I am a bit sad to finish this novel. I had held off on reading this for a long time because it is the last Jin Yong novel. Now, I will never read a fresh Jin Yong novel ever again. Re-reads are not the same. That said, this was the right novel to save for last.

Thanks, Jin Yong. It was a great ride.

What does it say about Sara K.’s life that she saw some Beijing opera, learned how to open up encrypted filesystems with a liveCD, and was bitten by wild leeches in the same week?