Several articles and announcements have caught my eye this week in the manga (and comics) blogosphere, but there are three in particular that had me pressing the “retweet” button with the power of my whole heart. So with that in mind, I’d like to devote this week’s column to giving these items a signal boost.

3 must-click links in the comics blogsphere

1. Off*Beat Returns! – Normally I’d try to save the best for last, but I’m so genuinely giddy about this particular bit of news that I can’t help blurting it out right off the bat. Though new publisher Chromatic Press had announced a while back their intention to revive Jen Lee Quick’s unfinished series (originally published by Tokyopop), last night, they launched a Kickstarter campaign to fund the re-release of the series’ first two volumes as well as part of the cost to launch their upcoming Sparkler magazine, in which Off*Beat will continue to be serialized.

If you’re wondering what I’m raving about, check out my review of the first two volumes here at Manga Bookshelf.

2. Ryan Matheson speaks – Earlier this week, the Comic Book Legal Defense Fund released a short documentary on the story of Ryan Matheson—a manga fan who was arrested at the Canadian border for having images of manga on his computer that Canadian authorities deemed obscene. I wrote a post in 2011 about why I thought Ryan’s case should be of vital concern to all manga fans, and the CBLDF’s assistance and advocacy was key to his victory. Read more about the documentary (funded by the Gaiman Foundation) here in the CBLDF blog.

3. Gimme these clothes. Just gimme. – Also earlier this week, io9 (and everyone else in the comics world) pointed us to these fantastic (and sadly, theoretical) costume designs for a number of prominent female superheroes by artist Michael Lee Lunsford, in which they are actually dressed like people who could be comfortable and protected in a fight—or even just cold weather.

My personal favorite is Zatanna, on the left below, who just looks freaking awesome. As I said on Facebook when I first saw this, if I had the money, I’d dress like that every day. 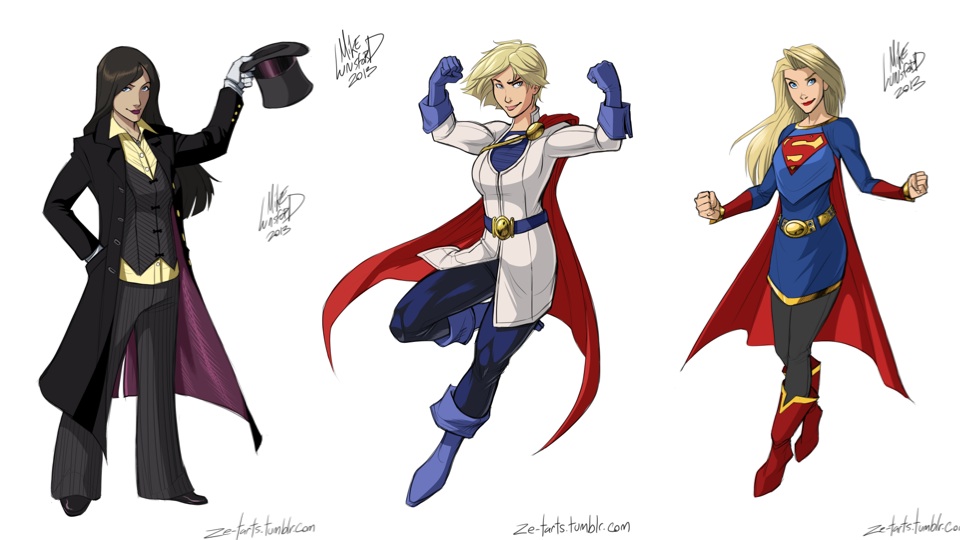 That’s it for me this week! Readers, any favorite links to share?