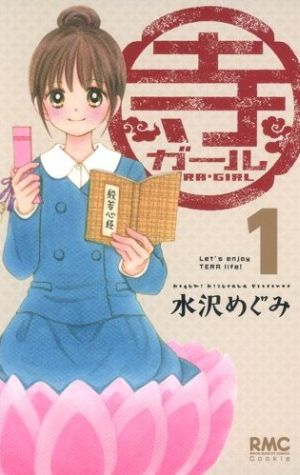 Today’s title is one I really think stands very little chance of seeing the light of day in the US, but that won’t stop me from gushing over it and hoping for a miracle to occur.

Tera Girl (or Temple Girl) by Mizusawa Megumi is the story of three sisters whose dad is a Buddhist priest. The three girls, Satoru, Hikari, and Ogami, could not be more different. Satoru is a university student studying medicine. She doesn’t hate that her family owns a temple, but she decided to focus on her own goals rather than the family business. Ogami is the youngest. She hates living in a temple and chose to go to a high school in another town so that no one would know about her family. Then there’s Hikari, the middle daughter. Also still in high school, she loves everything about the way she was raised and is a devout Buddhist. As a daughter, she can’t take over the temple herself, but her dad is counting on her to marry a man who is willing to become a priest and take over the temple.

Not only is this just a cute story in general and my favorite genre of shoujo (sweet romance with genuinely nice male characters, strong female friendships, no magic or anything out of the ordinary), it’s also a really neat look at how Buddhism works in Japan. Most Japanese people are culturally Buddhist, but not at all religious, so the manga is written for an audience who has little in common with Hikari’s upbringing. One reason I like school manga and workplace manga is that I like reading about everyday life in different places (though I also love things that take place in familiar settings, so maybe I just like stories about ordinary stuff), and this hits that same kink.

Tera Girl is a fairly recent series, with its third volume just released in February, and it’s by a very prolific, popular author, so that should mean it has a good chance at getting picked up, right? But no. I don’t know what it is about Mizusawa Megumi, maybe she is one of those authors who do doesn’t want her work translated, or maybe publishers just don’t think anyone is interested in the sort of stories she writes, but not a single one of her manga have ever been published in the US. Even scanlators don’t seem to care for her (so maybe that is a sign that there isn’t a lot of interest in what she writes, I don’t know).

If you were into anime in the mid ’90s, you probably remember Hime-chan no Ribbon, which while never officially licensed in the US, was very popular on the fansub circuit at the time and often shown at anime clubs. That’s probably her most well-known series outside of Japan, and that was twenty years ago. It’s also not at all typical of what she writes, since it’s a sort-of magical girl story, whereas the vast majority of her manga is the sort of everyday romance/slice-of-life stuff I love.

I know I said much the same thing in my post about Aozora Yell, but I feel like the US manga industry could really use more shoujo of this sort. So much of what’s put out here skews towards obnoxious love interests and female rivals. Kimi ni Todoke is popular, so it’s not like no one at all is interested in stories where the majority of the characters are nice and friendship is as strongly valued as romance, but there’s so much more like that in Japan and I don’t know why more of it isn’t given a chance.