There is a new movie, which I have yet to see, called The Guillotines. It’s directed by Andy Lau (who, among many other accomplishments, starred in one of the most popular versions of Return of the Condor Heroes and directed the Hong Kong version of ‘Initial D’), and one of the actors is Ethan Ruan, who starred in both My Queen and Fated to Love You. This gives me an excellent excuse to talk about the original Chinese-language guillotine movie, The Flying Guillotine.

The emperor gets a frightening new weapon, called the “flying guillotine” for his team of guards. Eventually, the paranoid emperor orders the assassination of the weapon’s inventor. This disillusions Ma Teng, one of the guards. However, when your emperor is paranoid, questioning him is super-dangerous, so Ma Teng has to flee and live the life of a fugitive, constantly terrified that the flying guillotine will soar back into his life … and cut off his head.

About the “Flying Guillotine”

Supposedly, this weapon really was used during the Qing dynasty, however there are no good historical descriptions of it, which allows creative people to fill in the details with their imaginations.

This movie is not the first time this weapon has appeared in fiction – I recall a 1960s wuxia novel making reference to the weapon – but it’s the first work famous for featuring this weapon, and without this movie we probably would not have seen any other ‘guillotine’ movies.

There are right ways and wrong ways to use flying guillotines in movies. Let me start with a wrong way.

The Wrong Way to Do It

In Tsui Hark’s Seven Swords, we see the flying guillotine being used to kill people within the first few minutes of the movie. 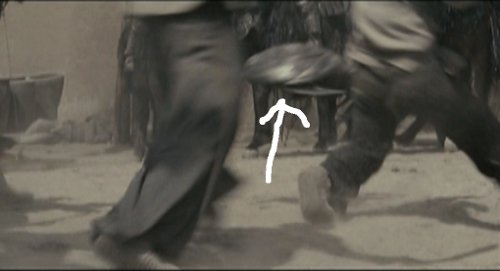 The flying guillotine at the beginning of Seven Swords

Unless the victim is a child, puppy, or otherwise obviously innocent and cute, or we can immediately understand the how the death devastates other people, or you’re a film genius, you cannot get the audience to feel a powerful emotional hit when somebody dies in the first few minutes of a movie. Note that the saddest movie in the world has a cute kid and a situation that is really easy to understand.

Flying guillotines are not easy to understand.

The Right Way to Do It

The inventor develops the concept of the flying guillotine.

The Flying Guillotine spends a lot of time explaining what the flying guillotine is. It shows how the inventor got the inspiration; it shows the weapon being demonstrated on a dog before the emperor; it shows the guards training for months on wooden dummies. This is to ensure that the audience has a very clear understanding of how the weapon works. It’s almost a half-hour into the movie before the weapon is used on a human being, and by then, we know exactly why we should be freaked out.

The guards are practising using the flying guillotine

How does it work?

Oh No! There’s a flying guillotine on his head! We know what happens next…

3. The attacker yanks the chain, which causes the blades inside the hat to slice the victim’s neck.
4. The attacker, via chain, pulls the guillotine back, which comes with the head.
5. The victim is left standing there, only without a head.

This is a scary weapon because:

1) It seems to come out of nowhere – so the characters always have to be careful, lest a flying guillotine comes in the window, into the courtyard, out from the woods, etc – YOU ARE NEVER SAFE!!!!
2) We get to see the flying guillotine land on the victims head before the head gets cut. This gives the audience a moment to feel horror as they anticipate the next step.
3) The head seems to simply … disappear. Bystanders are left clutching the now-headless victim, not understanding where the head went (the audience, of course, understands too well). The movie repeatedly shows the moving bodies of headless people … and it’s always creepy.

What seals the deal, of course, is the emotional resonance.

First of all, there are lots of reaction shots. They are just right. They are usually pretty quick, so they don’t drag on and overstay their welcome. However, they effectively communicate the characters’ terror. The dread is contagious.

And the movie is very good at stepping up the tension right up to the climax. First, even when the guards are just training, it feels as tense as a sword hanging by a thread – we know that it’s only a matter of time before heads roll, or more accurately, get snatched away. Then heads do get snatched way. Then Ma Teng gets married, so his wife is also in danger. Then Ma Teng has a child, so there is also now a cute kid in danger.

The villain has kidnapped the cute kid!!!!!!

Another way the film ups the emotional resonance is splitting fight scenes with a scene that gives the fight meaning.

It’s time for a song

The first split scenes is a fight that happens against a … Huangmei opera number. Shaw Brothers happen to be the biggest producer of both Huangmei and kung-fu movies, so it’s not surprising that they would mix the two. As Ma Teng fights for his life, this woman sings and dances. Aside from providing a beat for the fight, it’s a stark contrast to have such an upbeat song for a life-and-death battle. But I think that’s the point. It’s supposed to jolt the audience … and also give the audience a sense of why Ma Teng wants to stay alive.

Let us dance – by which I mean fight to the death – to the upbeat music!

The song featured in the movie was also covered by Teresa Teng (Deng Lijun), Taiwan’s greatest cultural export and the most popular singer in the entire history of East Asia.

The other split scene is when Ma Teng’s wife gives birth inside, while Ma Teng fights the two assassins outside. Aside from contrasting birth and death, splicing the childbirth scene and the fight really heightens what’s at stake.

There is also the distinctive bell that rings when the guards are ordered to carry out another assassination.

I’m the kind of person who is much more easily spooked by sound than by sight.

I pointed out that Ni Kuang wrote the script for The 36th Chamber of Shaolin. He also wrote the screenplay for this film … and I strongly suspect it’s autobiographical.

Am I suggesting that Ni Kuang is some time traveller who used to be one of Emperor Yongzheng’s guards? No.

He was, however, a public security official for the People’s Republic of China in the 1950s. Part of his job was writing death sentences. He became suspicious about some of the cases brought before him, and asked a local party chief about it. The chief replied that if he kept asking such questions, Ni Kuang himself would be sentenced to death. Out of fear for his life, Ni Kuang eventually fled the People’s Republic of China and settled in Hong Kong, where he became one of the most popular Chinese-language writers of the 20th century.

I don’t think it is can be a coincidence that Ma Teng and Ni Kuang’s lives have such parallels.

It is easy to get this movie with English subtitles.

This is one of my favorite Chinese-language movies. Is it the kind of movie which you can use to demonstrate your high-culture credentials? No. But I have seen my share of art house films, and at least to me, most do not have as much feeling as this kung-fu flick.

Next time: TBD (though there is a high probability that it will be a manhua by Lai An aka Ryan)

The more Sara K. learns about Chinese-language media, the more she realizes how much she doesn’t know. Sometimes she feels like her knowledge is inadequate for writing this column. However, she makes no pretence about academic qualifications (or other kinds of qualifications), and perhaps her novice status makes her posts more accessible to people new to Chinese-language media.