MICHELLE: Hey, Melinda! What’s red and bad for your teeth? 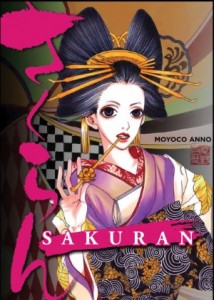 MICHELLE: Howdy! So, once again, we’re devoting our column to a single series. This time it’s Sakuran: Blossoms Wild by Moyoco Anno, published by Vertical. Although I own a couple of other complete series by Anno, this was my first time actually reading one of her works. I definitely enjoyed it, but found myself somewhat stuck between enjoying it for what it was and wishing it was somehow more uplifting.

But maybe I’m getting ahead of myself and we should offer readers a synopsis.

Sakuran tells the story of Kiyoha, a young woman in Edo-era Japan who was sold to a brothel in Yoshiwara as a child. Over the course of the story, she endures the path towards becoming an oiran (the highest-ranking courtesan), very little of which is particularly graceful or glamorous, and after suffering through some unexpected heartbreak finally seems to accept the brothel as her home.

It’s a rather cynical tale that does not attempt to gloss over the fact that Kiyoha will most likely live her entire life in servitude (either to the brothel, or to some future man who might buy her freedom), and manages somehow to make the brothel feel like the better fate in the end.

MICHELLE: Yeah, it may be a difficult life, but at least Kiyoha seems to have made peace with it by the end.

Which is, really, not exactly the end, as Sakuran follows a similar structure to Ooku, in that the first chapter is “current day” in the life of its protagonist, followed by detail on how exactly Kiyoha came to be in that situation. Kiyoha’s not an easy person to like at first—one of the first things she does is clobber and pee on another courtesan—but I did grow to sympathize with her by the end, especially when her love proves false. “Cry, and you lose. Love, and you lose. Win, and you lose.”

MELINDA: I admit that I sympathized with her practically from the start, but especially as soon as Anno began to tell Kiyoha’s story from the beginning. Her intense desire to escape the pleasure quarter felt so real and relatable, I couldn’t help but side with her from then on.

One of the things I was immediately struck by was what a different kind of story this was from Blade of the Courtesans, a prose novel Vertical released a few years ago. Though the novel had some stirring moments, one of the comments I made in my review was this:

The story constantly describes the power of women in the Yoshiwara society, yet in the midst of an impassioned explanation of how the women are able to come to Yoshiwara to “rinse away their origins” and escape from the persecution of their clan, it is revealed that they are indentured to the various houses in the pleasure quarter (all owned by men) until their 28th birthday, at which time they may choose to get married or to remain courtesans for the rest of their lives. That these women, shackled to a system that values them only for their skills in lovemaking, are held up as the pinnacle of female beauty and sovereignty is inexpressibly sad.

If there is one thing Sakuran does not do, it’s try to romanticize or glorify the life of an indentured courtesan. For that, I am very grateful.

MICHELLE: It definitely does not do that.

It was an interesting experience reading this at about the same time as I was getting caught up on Ooku, because both of them deal with women forced to take many sexual partners but for vastly different reasons. It’s the courtesan’s job to do so, but so too the female shogun (who supposedly has all this power) must take lover after lover in the desperate attempt to produce a child hearty enough to become her heir. In reality, are they really so different, the shogun and the courtesan? In both cases, their fates are bleak as they submit to (or compel) their parade of lovers, very rarely finding true love.

MELINDA: That’s a great point, Michelle. Despite the power having supposedly been transferred to women out of necessity in Ooku, it’s ultimately still a story about women trapped in a society that values them really only for their sexual organs, one way or another.

Heh, you know, with all this in mind, I have to admit that I was pretty surprised to hear at the beginning that you had any hope or expectation of Sakuran being “uplifting.” Given the circumstances, it’s hard for me to imagine how it could be!

MICHELLE: Well, I don’t know, I thought she might actually escape or something! But, of course, her options really wouldn’t have been any better outside Yoshiwara (without a husband, at least), which Anno makes clear. So it would’ve completely been a fallacious fantasy to read a story about a courtesan getting out and living happily ever after. Not challenging for a reader, but kind of… satisfying.

MELINDA: I can understand the impulse to wish for a more unambiguously happy ending. Yet the ending as it is isn’t exactly bleak, even if it seems like it should be. That’s actually one of the book’s greatest strengths, really. It manages not to be just grim, which is kind of amazing.

MICHELLE: Definitely. I want to add here that if we’d actually been given a happier ending, I probably would’ve hated it and chastised Anno for not being brave and taking a darker route. I guess I’m just conditioned now to expect creators to go for uplifting instead of ambiguous, since it has happened so many times before.

MELINDA: Probably one of the reasons we’re able to get a more ambiguous ending here is the fact that, aside from something like Sugar Sugar Rune, Moyoco Anno mainly writes for adults–and most often about adult women. But since manga about teen girls is sort of the default for female-centric manga imported to the US, that’s really what we’ve become accustomed to.

MICHELLE: Yes, you’re definitely correct. And when we do encounter a story aimed at teen girls that takes a more painful route—We Were There, 13th Boy, to some extent…—we tend to love it to pieces.

MELINDA: We do! Now, I’m not sure if I’m prepared to say that I love Sakuran to pieces. I enjoyed it very much, and I think it’s very well-crafted, but it’s not the kind of story that resonates really strongly with me on a personal level the way some others do.

That said, as a critic there is so much here to enjoy. One aspect we haven’t really touched on yet is the artwork, which is really quite stunning, especially with Vertical’s particular touches. The paper choice, color pages, and beautiful foil cover let you know right away that Sakuran will be a visual treat.

MICHELLE: Well, no, I didn’t love Sakuran either, but I really admire it, if that makes sense.

Going in, I wasn’t sure how I’d feel about the artwork, since Anno has such a distinctive style, but I ultimately enjoyed it and thought she did a terrific job capturing the atmosphere of the tea house. I did have some problems with telling a few of the courtesans apart, though.

MELINDA: That makes perfect sense. I think that’s where I was at with it, too, though I did really feel strongly for the main character, which is always a big plus. And one of my favorite aspects of the artwork has to do with her as well. I was really impressed by Anno’s ability to visually portray both Kiyoha’s spite and her vulnerability, which is not a combination that always translates well to the page.

MICHELLE: I hadn’t thought about that specifically, but it’s true that even nearly two weeks after I read Sakuran, I can still easily conjure some of Kiyoha’s expressions falling into both of those categories. Actually, I can still vividly remember quite a few scenes, including specifics of panel layouts. And that’s not something I could say about quite a lot of other manga.

MELINDA: One thing Anno has accomplished, perhaps specifically by writing Sakuran as a collection of story snapshots rather than a long narrative, is that the moments she’s chosen to highlight are genuinely memorable, and that goes for individual images as well.

MICHELLE: Yes, that is true, though I still wish it could’ve been longer. Carlo Santos at ANN put it well: “This volume offers a glimpse into a fascinating world, but closes up before we ever get a chance to peek around the corners.”

MELINDA: I certainly would have read much, much more of it!