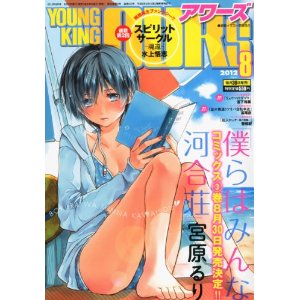 Young King Ours has the tagline (in English) “The Most Eccentric Manga Magazine,” however, as the art is not crazy nor are the stories particularly wacky, the claim is a bit of an overreach. I’d give Manga Erotics F or Comic Beam the wins for eccentricity, but Young King Ours would probably be one of the leaders of the following pack.

Young King Ours is published by Shonen Gahosha Publishing, one of the lesser known publishing companies, and yet many of the titles that ran in the Pages of YKO are well known to western readers. Rikudo Koshi’s Excel Saga called YKO home until it finished its 15-year run at the end of 2011. Kouta Hirano’s Hellsing is another well-known title, as is Yasuhiro Nightow’s Trigun Maximum.

YKO began life in 1993 as a supplement, but became a monthly magazine in it’s own right in 1997. It sells for 550 yen/issue ($7.00 at time of writing) for just around 550 pages. Japanese Magazine Publishers’ data puts YKO monthly circulation at a modest 53, 000 in 2010, down significantly from 2008’s 68,000.  The website is the very opposite of eccentric, as there is little on display other than the titles running that month and a message or two, lumped together as it is with the other Shonen Gahosha publications. No contests or giveaways here.

The stories that run in this magazine are not immune from the power of fanservice, but surprisingly, the characters drive the story far more than sexualized images. The magazine is more likely to appeal to a slightly less…dare I say it…creepy?…audience that does indeed like large breasts but doesn’t seem to need the constant reassurance that the female characters wear underwear that fills the pages of other seinen magazines. Maybe for that reason, it is an eccentric manga magazine after all.