Those of you who have followed the evolution of the Manga Moveable Feast, and particularly the way in which subjects for the Feast are currently chosen (unlike the original democratic model, hosts now select topics on their own), have most likely assumed that, as the host of the CLAMP MMF, I’m a big fan of their work. This is a fair assumption, and it’s not exactly wrong, but the truth is a bit more nuanced. Though I count several of CLAMP’s manga among my very favorites (Tokyo Babylon, Cardcaptor Sakura, and xxxHolic are a few I’ve praised vocally over the past few years), my feelings for others range anywhere from general indifference to extreme impatience and even dislike.

One of the titles that originally registered with me somewhere between “impatience” and “dislike” is the very popular and tragically unfinished X (X/1999 when it was originally published in English), the first of CLAMP’s series to officially reach American shores. As a huge fan of Tokyo Babylon, my initial reaction can probably be chalked up to the fact that CLAMP waits several volumes before introducing Subaru into the story. But once I’d finally forgiven X for not being Tokyo Babylon II, I still found myself growing impatient with its sprawling cast, its convoluted plot lines, and its maddeningly repetitive exposition. Fortunately, VIZ’s new omnibus releases of X have not only reintroduced it into the North American market, they’ve also given me a second chance to try to grasp its charms—and grasp them I have, though they haven’t been at all what I expected.

Bloggers like my Manga Bookshelf cohort Kate Dacey have often referenced X‘s gory battles and body count as a major draw for readers. In one of her features for this month’s MMF, in fact, she likens X‘s apocalyptic imagery to the work of Katsuhiro Otomo (Akira), and goes on to conclude, “The battle scenes are kinetic and violent, executed with a gory zest that’s difficult to resist. The dream sequences, too, are suitably shocking: characters are dismembered, crucified, impaled, and engulfed in flames, often right before their loved ones’ eyes. I hesitate to suggest that X‘s body count is a victory for women, but it is a sharp and welcome rebuke to the idea that female readers strongly prefer conversation and character development to butt-kicking and carnage.”

She’s right, of course. X is filled to the brim with bloody battles that don’t shy away from gore. But I admit that my primary reaction to VIZ’s new, larger format omnibus editions has been the realization of how astoundingly, gorgeously shoujo it all is, especially in its imagery.

Here’s a sequence from X‘s first volume, in which burgeoning dreamseer Kotori receives a disturbing dream about her childhood friend, Kamui. 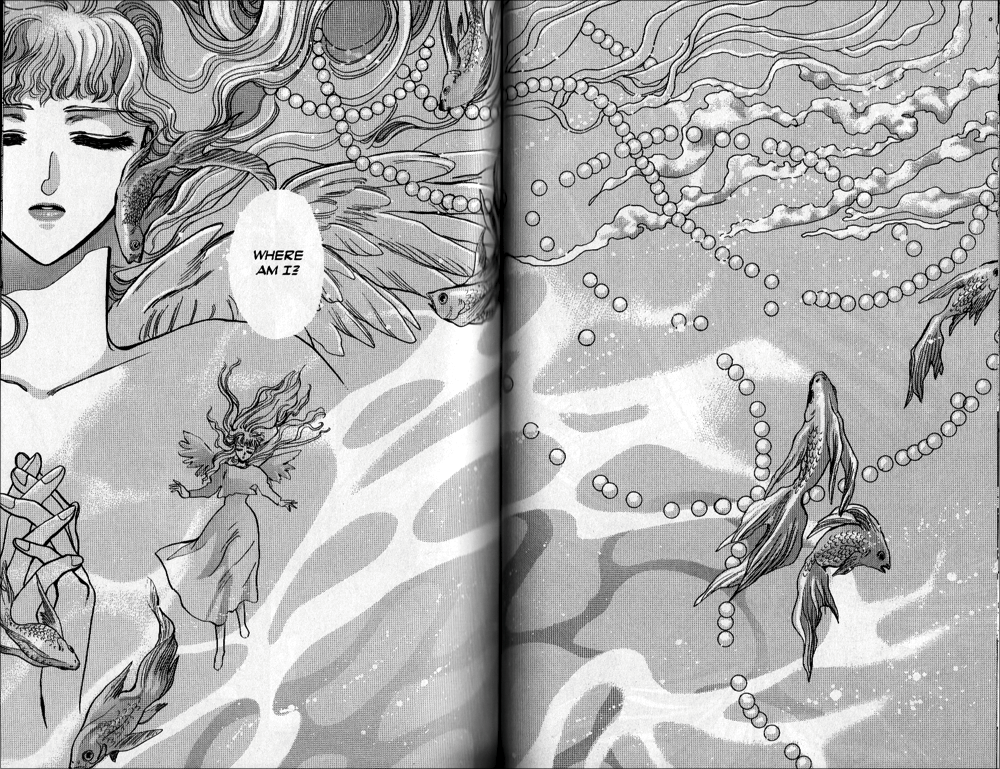 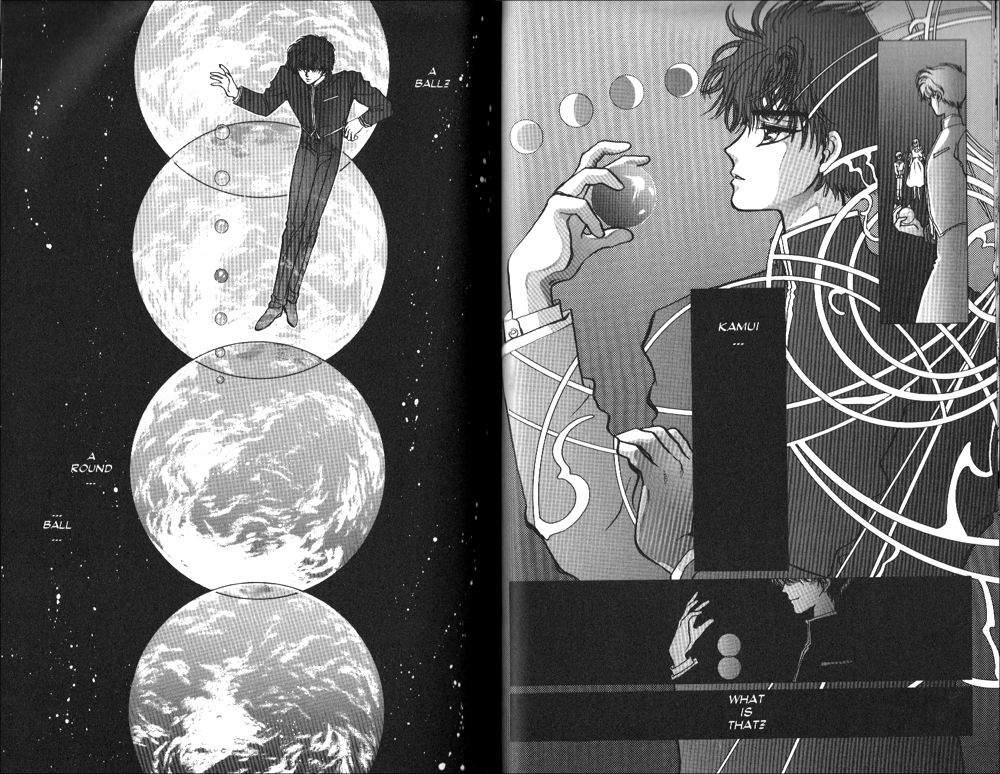 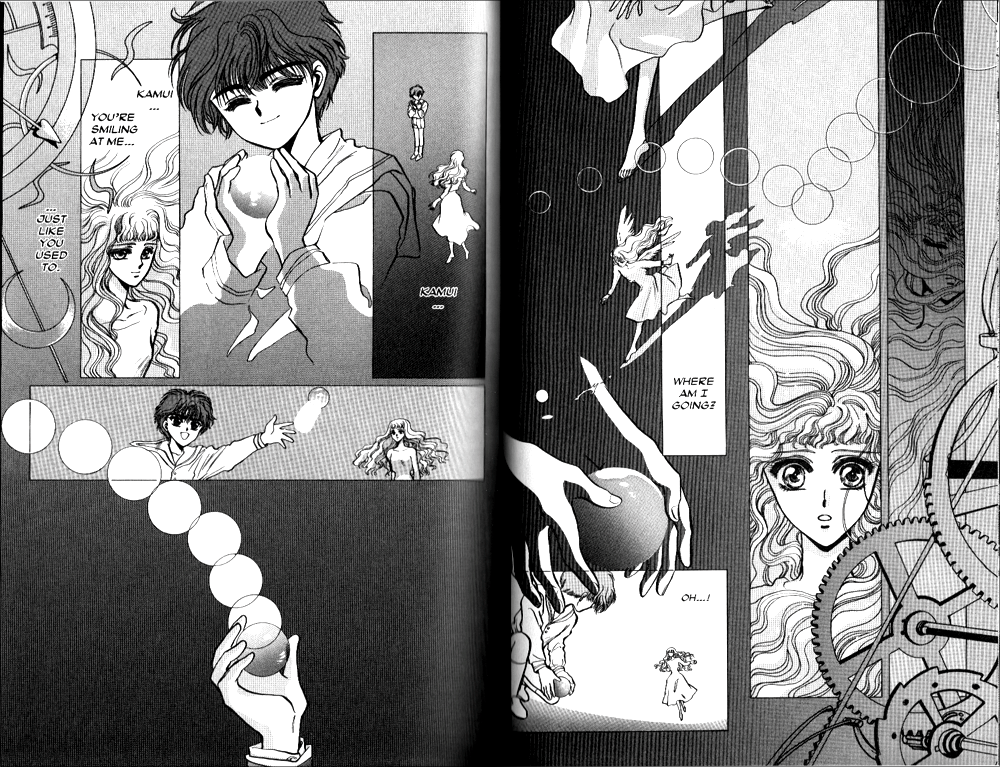 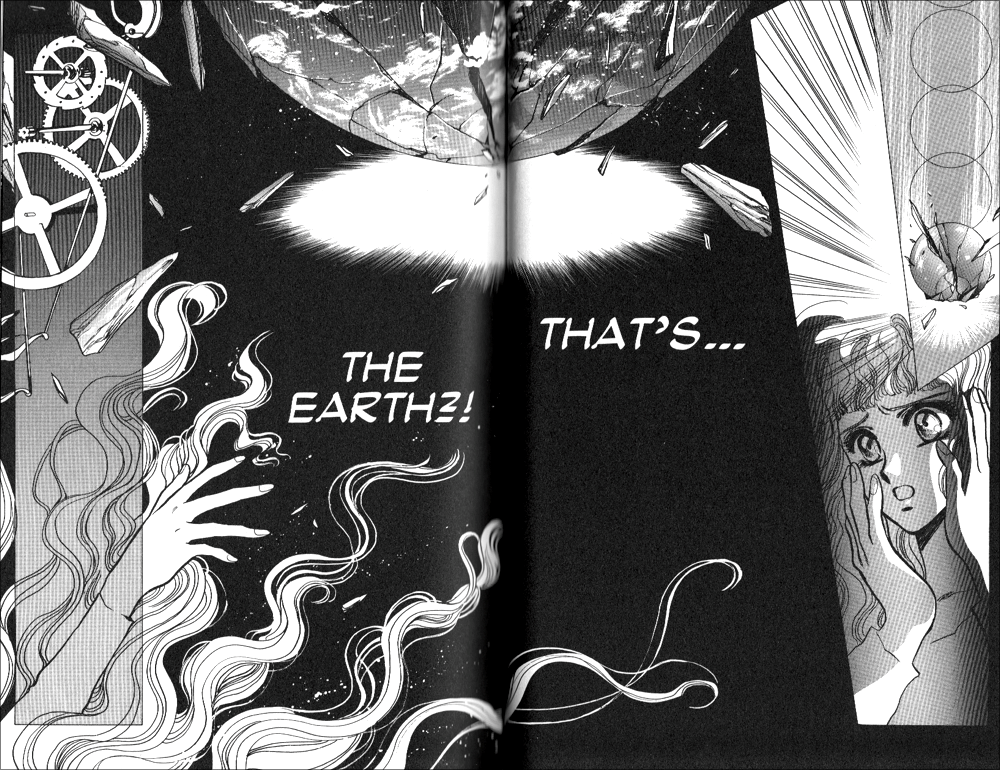 When I look at a scene like this… well, first of all, I think it’s freaking beautiful. With its flowing lines and minimal use of traditional boundaries, CLAMP creates a surreal, dreamlike landscape that manages to be remarkably easy to follow while also completely immersing the reader in Kotori’s state of mind. The evolution of the spherical images in her dream from a whimsical, globe-like ball to an apocalyptic nightmare is a genuinely striking progression, enhanced by the abstract panel placement—a collection of emotional slivers mirrored by the shattering of the earth itself.

That this type of page composition is quintessentially shoujo is no revelation of course. But its emotional resonance as well as its style of imagery reminds me immediately of other shoujo series from the same period.

Kotori’s initial descent into her dream reminds me of this section from Reiko Shimizu’s Moon Child, in which Teruto slides into the depths beneath a city fountain in order to make a deal to save his sibling’s life. Though Teruto’s journey is a waking one, in both cases, there is a sense that the main character of the scene is falling into a state that is both familiar and perhaps dangerous. Teruto’s and Kotori’s bodies are completely relaxed as they descend, while the water and the scattering fish around them create a sense of otherworldliness and tension. 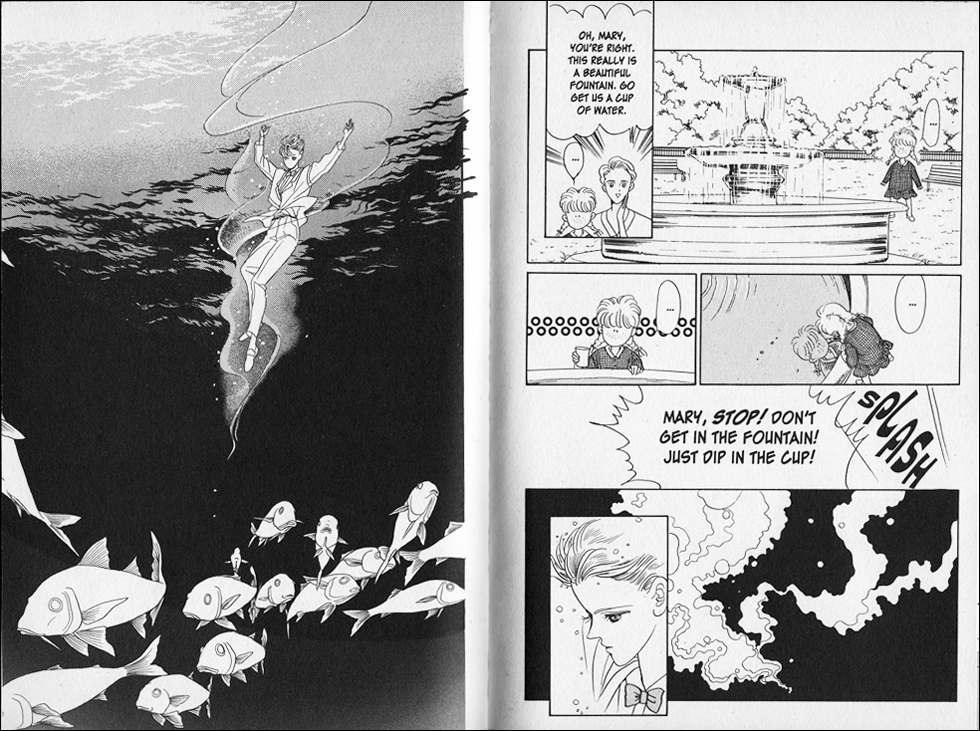 The second spread of this sequence is dominated by the image of Kamui, holding and standing dominant over a representation of the earth, which reminded me immediately of this scene from Saki Hiwatari’s Please Save My Earth, in which Alice ponders the emotional state of Rin, whose previous incarnation, Shion, is pictured as if holding his world in thrall. Though the POV character in both series here feel love and affection for the subject of these images, there is also a sense that the person being pictured is potentially dangerous and capable of real harm. 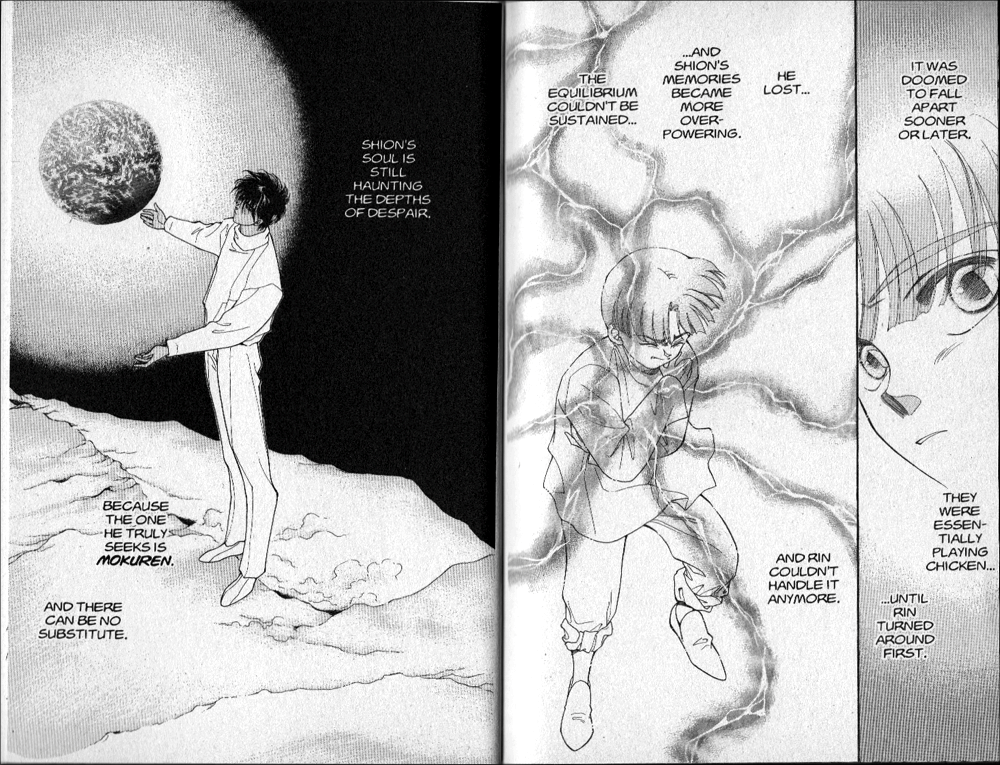 The rapid, stream-of-consiousness images in the third spread of Kotori’s dream bears a similarity to this sequence from Keiko Nishi’s short manga Promise (note: Promise reads left-to-right). I find this particularly interesting given Promise‘s real-world setting, because it demonstrates so clearly how this type of mental imagery is just as much a part of our “real” lives as it is our dreams and fantasies. In both cases, these scattered, tumbling images create a sense of panic and impending emotional danger. 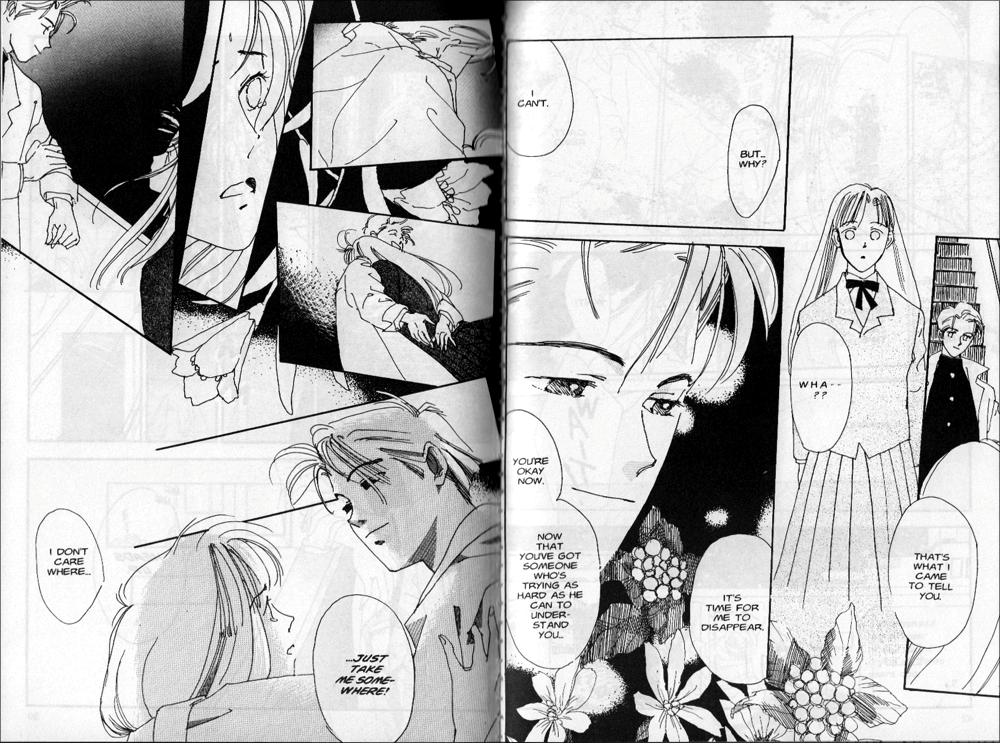 Though the content of the last bit I’ve chosen from Kotori’s dream bears very little similarity (at least in terms of plot) to what is happening in this spread (again from Please Save My Earth), Kotori’s and Mokuren’s states of mind are quite similar. They’ve both had a sudden realization about a loved one that results in complete horror. Kotori has been hit with the realization that her loved one, Kamui, may destroy her world, while Mokuren has been hit with the realization that she may be taken from the world before she’s able to tell Shion that she loves him in the first place. While the Kotori’s predicament may seem more serious and vital than Mokuren’s, the artwork tells us differently. Whatever the scope of the situations’ consequences, Mokuren and Kotori are equally devastated by their respective realizations. 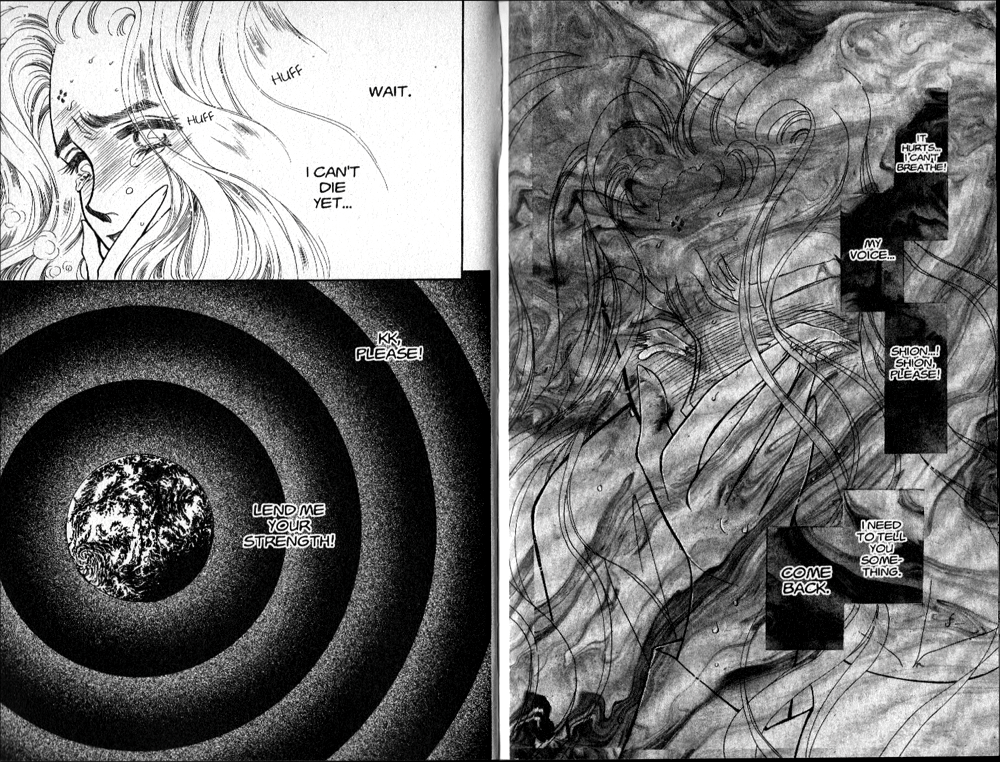 This kind of emotional tension combined with abstract imagery is found all over in shoujo from the late 1980s and early 1990s (here’s a beautifully rendered scene from Naoko Takeuchi’s Sailor Moon)—which is part of why it’s become my favorite era for shoujo artwork. 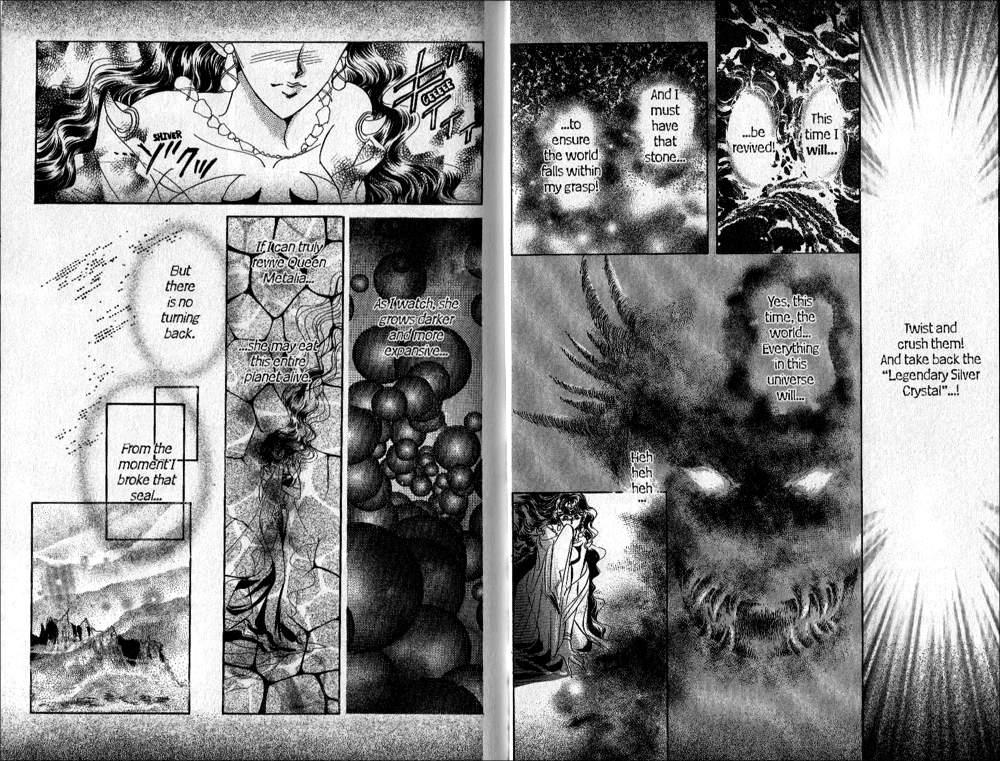 Though I’d be remiss if I didn’t mention that the very first scene that came to mind while pondering artwork for this article came from Moto Hagio’s They Were Eleven, which was published in the 1970s (note: these pages read left-to-right). The accelerated tumbling of the elevator buttons at the top of the first page has stuck with me since I first read this manga several years ago, and I immediately associated it with Kamui’s tumbling earth. There’s something about shoujo and circles… 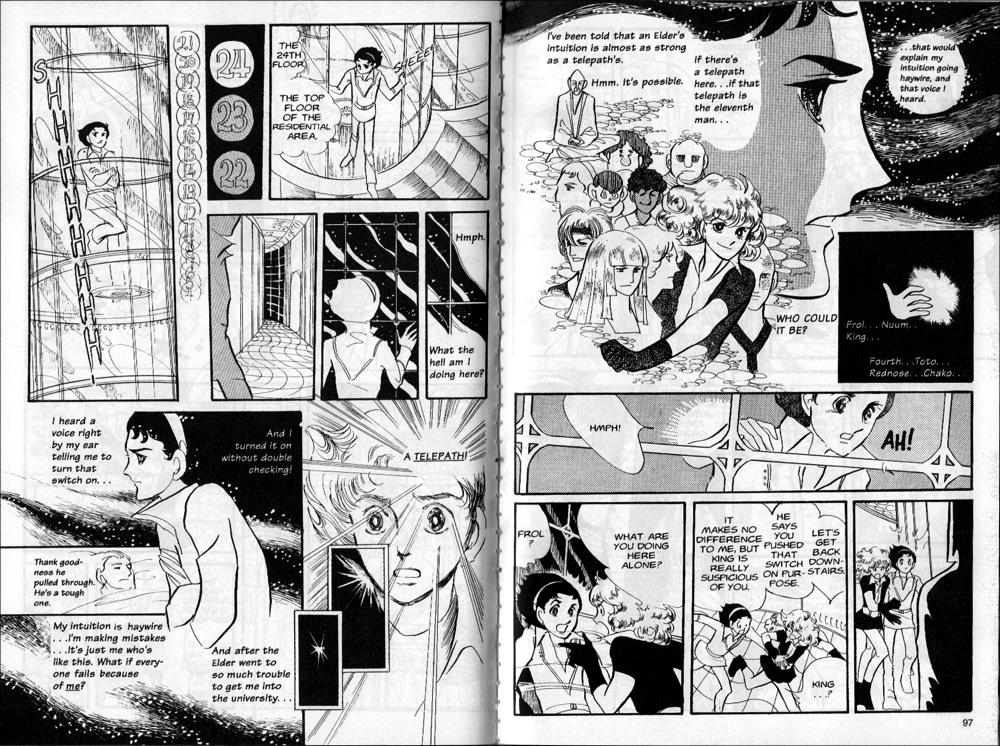 It doesn’t get better than this, my friends.

Time will tell, of course, if my new infatuation with the shoujo spectacularness of CLAMP’s X will help me weather its narrative messiness in the long-term, but I’m certainly enjoying myself so far. Kudos to VIZ for presenting this unfinished series in a format that finally shows it off to its best advantage. I think I may speak for all fans of 1990s shoujo when I say, “Thank you. I thank you with all my heart.”

Let’s hope this becomes a trend.