MICHELLE: Hey, Melinda! What’s orange and sounds like a parrot? 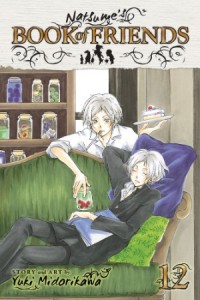 MICHELLE: I did! I spent the week conducting a massive catchup marathon of Natsume’s Book of Friends, and while I now lament that it took me so long to really immerse myself in the gentle beauty of this fantastic series, it was nonetheless a lovely experience to luxuriate in a dozen volumes!

The twelfth volume came out earlier this month and features mostly episodic stories, though not without personal consequence for Takashi Natsume, a lonely teenage boy with the ability to see yokai. First, he helps a yokai read an old, damaged letter from a human. Next, there’s a story about an old lady yokai who thought Natsume’s grandmother (who bound yokai to her by writing their names in the Book of Friends) was a yokai. And then Natsume gets captured in a jar and taken off as tribute to a newly awakened god, whereupon his friend Tanuma (possessed of a very limited supernatural sensitivity) steps up to attempt to rescue him.

I really loved getting to see Tanuma in action in this volume, and though everyone will probably roll their eyes when I say this… I could help but notice the Buffy parallels! You’ve got a teenager with a powerful supernatural ability that he’s not supposed to tell anyone about—and who is worried that knowledge of this information will put the people that he cares about in harm’s way—who has managed to make a couple of friends and struggles with how much to tell them, how much to let them be involved, and guilt when they end up getting hurt while trying to help. It’s unusual for someone with this gift/curse to maintain such friendships, but Natsume is determined to try.

And, of course, the episodic tales themselves are often quite nice—I love that Natsume is unable to ignore anyone in need of help, including yokai—and I positively adore Nyanko-sensei, the powerful yokai who acts as Natsume’s bodyguard. He took up this role because Natsume promised he could have the book if Natsume died, but it’s obvious that Nyanko really cares for him. It reminds me of Wesley and the Dread Pirate Roberts in Princess Bride, where Roberts adheres to the formula of threatening to kill Wesley, but he never really does because he’s grown fond of him. Nyanko-sensei protests too much that he’s only there to inherit the book, methinks.

To sum up, I have now been converted into a major Natsume fangirl.

MELINDA: Oh, I’m so glad you’ve become a fan! I’m actually several volumes behind in this series now, but it’s long been a favorite, for many of the same reasons you mention here. I’m especially anxious to read that story involving Tanuma.

Also, I too am exceedingly fond of Nyanko-sensei. It doesn’t hurt that he usually looks like a really cranky cat.

MICHELLE: I like it best when he actually acts like a cat, like getting distracted by butterflies, etc. There’s a really cute random illustration in this volume where Midorikawa-sensei has depicted him sleeping atop a wall with several other feline companions. It’s very cute.

Anyway! What’ve you been reading this week?

MELINDA: Well, I may not be a cat, but I’m definitely feeling cranky. 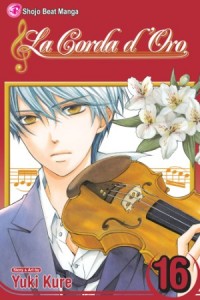 My first read this week was the penultimate volume of La Corda d’Oro, Yuki Kure’s manga adaptation of the romantic video game of the same name. I’ve generally been a fan of this sweet little reverse-harem series, even with its blatantly ridiculous ideas about classical music (particularly violin repertoire) and its thin, supernatural plot. Most of the characters are genuinely likable, and even when they fall into very standard types (which most of them do), they’re quite fun.

In volume fifteen, emotionally stiff violinist Len finally came to terms with his feelings for the series’ heroine, Kahoko—a surprise to no one, as it’s been obvious for a while which boy in this harem was likely to get the girl. In the latest volume (sixteen), Kahoko begins to finally recognize her feelings for Len, and while this is no surprise, either, its consequences managed to make me actually angry with this series for the first time ever.

Having determined not to tell Kahoko that he would be leaving the country on the very same day she is to play in an important music competition (relationship decisions have never been his strong suit), Len unfathomably blurts out the news on the evening just before Kahoko’s performance, sending her into a loop of anxiety and confusion at the moment she needs it least. What pushes me over the edge, however, is Kahoko’s near-sabotage of her own performance in favor of wallowing in emotional turmoil, which plays just about as wrong with me as it possibly could. For while I realize that the story of a teenager prioritizing her feelings for a boy over a personal dream she’s worked her ass off to achieve is probably more realistic than most of us would like to acknowledge, I think it may have finally eclipsed my tolerance for the series’ lack of devotion to its subject.

Of course, I also realize that the problem may be mine, as perhaps it’s been quite clear all along that the story’s real subject is Kahoko’s romantic dreams rather than her musical aspirations, but it still kinda pissed me off.

Scold me if you must.

MICHELLE: Oh, that would piss me off, too! I will say, though, that this series is definitely capable of provoking some strong emotions in you: here you’re angry, but I remember an earlier plot revelation that actually made you cry.

MELINDA: *sigh* It’s true. I’m really a sucker for this kind of series, overall. I suspect I won’t be able to resist the final volume, even after this.

So, our final selection for the week is something we both read. Would you like to introduce it? 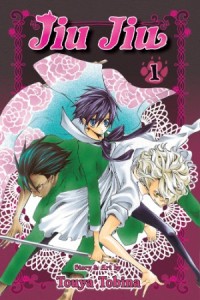 From the creator of Clean Freak, Fully Equipped (long-time readers might recall I talked about this series in the past) comes Jiu Jiu, an extremely generic and unfunny tale of a misanthropic demon hunter named Takamichi who has some angst that results in her ignoring the two half-human half-demon wolfish pups that have been placed in her charge until they turn three, whereupon they proceed to enroll in her high school and sleep nude in her bed.

Over and over again, she leaves them behind for some reason, they whine, she realizes they care about her, or only want to protect her, or something like that. It’s all incredibly disjointed with disorienting shifts in time, and for the life of me, I cannot understand why a hot mess like this gets licensed but 7SEEDS does not.

MELINDA: Wow. So succinct. And so true, sad to say.

While I’d say my reaction against Jiu Jiu wasn’t quite so violently negative, it certainly was not good. Jiu Jiu does have a few strong points—or at least potential strong points not yet fully realized. Though Takamichi is irritatingly hung up on the notion that she must protect herself by not caring for anybody (is anyone else as tired of that song as I am?), she’s potentially a kick-ass heroine with a fairly kick-ass job. And while I could go the rest of my life without reading yet another introduction of her wolfy companions, Night and Snow (this series really suffers from exposition repetition), the artist does an eerily fantastic job of drawing teenaged boys who actually look and act like dogs. Seriously, it’s kind of impressive.

MICHELLE: Exactly. And you’re right, their more canine moments are the best in the volume. I despair, though, that a character who has explicitly stated he passed the high school entrance exams then proceeds to mistake a bra for a pair of glasses. High-larious.

Takamichi herself is not particularly likeable, and I don’t like the art, either. In fact, one particularly ridiculous pose (page 59) made me laugh and say aloud, “Oh my God, what?!” These factors together make it extremely difficult to hope that it will improve in future volumes.

MELINDA: Ha! I laughed at the very same pose!

There are some (again) potentially interesting musings here and there about the nature of Takamichi’s job and her feelings about her young protectors becoming killers, but these are too brief to make an impact. Probably the one thing that got me through it all was the cuteness of puppy!Night writing in his diary. Ultimately, though? Not cute enough.

MELINDA: And on that note… better luck next time? Let’s hope so.