This film has quite a few titles in English. Cheerful Wind is the title used by the IMDB, yet Play While You Play is the English title on my DVD. The Mandarin title is Fēnger Tītà Cǎi (風兒踢踏踩) which roughly means ‘The Wind Tip-Tap Steps’.

I picked this film because it brings together three of the most important people in Taiwanese pop culture: Chiung Yao, Hou Hsiao-hsien, and Fong Fei-fei. 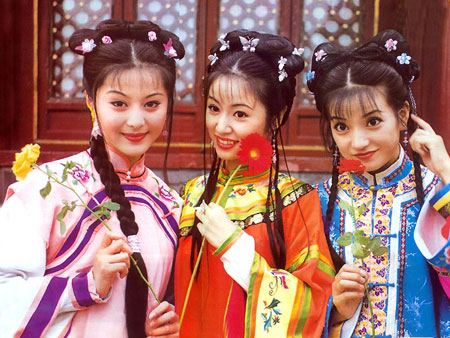 Chiung Yao is the most popular writer of Chinese-language romance novels ever. I think she’s also Taiwan’s most popular female novelist ever. Many of her works have been adapted for TV, some of which are available on DVD even though they are over 30 years old. It is rare for a 30+ year old Taiwanese TV series to be available on DVD, which demonstrates just how popular Chiung Yao is. Furthermore, the 1998-2003 Chinese TV series adapted from her novel Princess Pearl, aka My Fair Princess, is the most popular Chinese-language TV series ever.

Naturally, none of her novels are available in English, because publishers apparently think there is no commercial potential in translating the works of the most popular romance writer in the Chinese-speaking world into English.

I am not clear what Chiung Yao’s involvement with this film is. The DVD claims that she is the original creator and that she ‘supervised’ the film, but this is not adapted from any of her novels, nor did she write the screenplay. Maybe she created the plot, or maybe she just let the film use her name to sell more tickets. 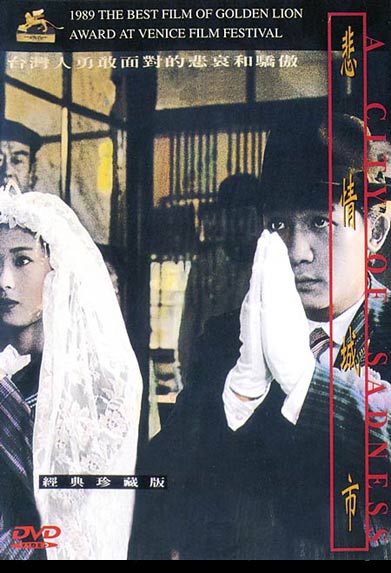 Out of all of the people involved with this film, Hou Hsiao-hsien is the best known outside of Asia. He is one of Taiwan’s most famous filmmakers. His best-known work is City of Sadness, set in the town of Jiufen (Jiufen also inspired Hayao Miyazaki’s Spirited Away, and thanks to City of Sadness and Spirited Away Jiufen is constantly packed with Taiwanese and Japanese tourists). Hou Hsiao-hsien’s films get discussed in film schools around the world, put on “films to see before you die” lists, and played at international film festivals.

This film was made very early in his career—it’s only his second feature-length film. Nonetheless, his distinctive, low-key style is already apparent. 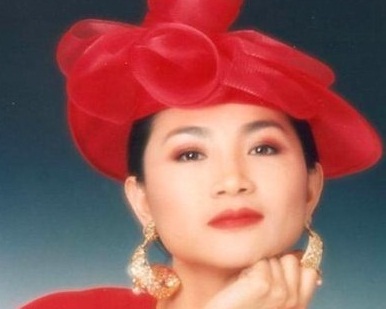 If you created a list of “Five Most Important Taiwanese Singers of All Time,” Fong Fei-fei would definitely make the list. Frankly, I think she would belong on the “Three Most Important Taiwanese Singers of All Time” list too. She also happens to be one of my favorite Chinese-language singers. It was a big deal in Taiwan when she died earlier this year, and I wrote my own blog post about it.

Unlike Chiung Yao and Hou Hsiao-hsien, whose families fled China after WWII, Fong Fei-fei’s family had been in Taiwan for centuries, and she herself had been born in Taoyuan county (hey, I live in Taoyuan county!). Even after becoming a star, she stayed in touch with her working-class roots, and that is part of why she is so beloved.

Even though she is best known as a singer, she got her big break in show business as an actress, not a singer. That break was being cast in the TV show A Pair of Swallows Fly (燕雙飛), for which she sang the theme song. Even after establishing her singing career, she continued to accept acting roles, including the leading role in this film. 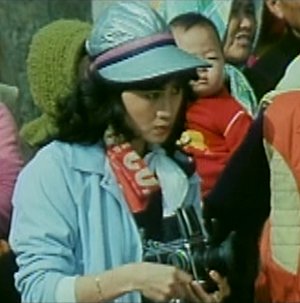 Xinghui is a photographer. She lives with her boss/boyfriend, Luozi, a producer of TV commercials from Hong Kong. However, her feelings for him a bit … lacking. While on a trip to Penghu to shoot a commercial, Xinghui meets Jintai, a flute-playing medic who lost his eyesight in a car crash while driving an ambulance. The two establish a rapport which only deepens when they happen to run into each other in Taipei. After an operation, Jintai can see again, and follows Xinghui to the countryside when she has to act as a substitute teacher for her brother. There, Jintai asks Xinghui to marry him. Meanwhile, Luozi plans a trip to Europe with Xinghui—knowing that travelling in Europe has been Xinghui’s dream.

So, does Xinghui run off to Europe with Luozi, or does she stay with Jintai in Taiwan? 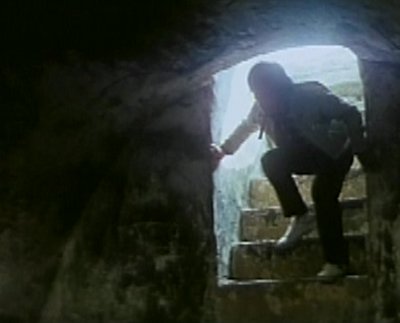 I really like the theme song for this film (which, by the way, was sung by Pauline Yeung and Kenny Bee, NOT by Fong Fei-fei herself). There are several other songs in the film, but the theme song is the clear winner. In fact, I like this song so much I translated the lyrics into English:

The wind blows and blows,
The clouds float and float,
The branches climb outside the window,
The little orioles are all adorable.

The wind steps on by,
The clouds step on by,
Knocking on the doors, asking,
‘Is my friend there?’

This film excels at charm. The story moves quite slowly and quietly, focusing more on highlighting how playful life can be instead of driving a plot forward.

For example, in the opening scene, they are shooting a commercial at a place where it is written “TAKING PICTURES IS FORBIDDEN.” 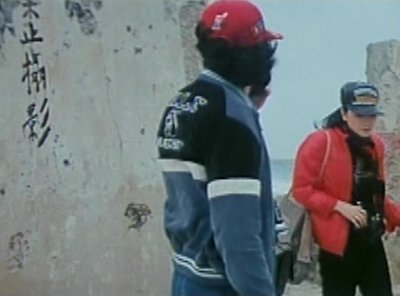 The writing on the left side of the picture says “Taking pictures is forbidden.”

This is actually quite common in Taiwan—there are many places where the use of cameras is restricted for military reasons. I imagine these places would be especially common in Penghu, where this scene is set, because it is one of the most fortified places in Taiwan.

Speaking of military locations, one of my favorite scenes is where Xinghui, Jintai, and some children are playing hide-and-seek in an abandoned fortification (I am guessing that it is from the Japanese era, but I’m not sure).

Right at the beginning of the film, there are children who are setting up a dung bomb as a prank to play on a passerby.

However, the kids get the timing wrong, so the dung bomb explodes on them instead. 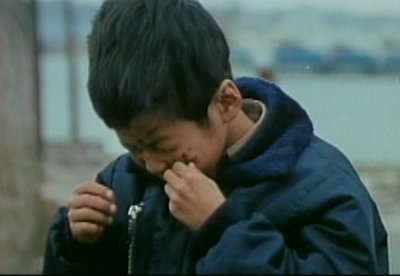 This boy is a victim of his own dung bomb.

Then, it is revealed that this is actually being filmed for a laundry detergent commercial. And because there was something wrong with this shot, they have to look for a cow so they can get more cow dung for more shots.

It’s all just a film in the process of being shot. 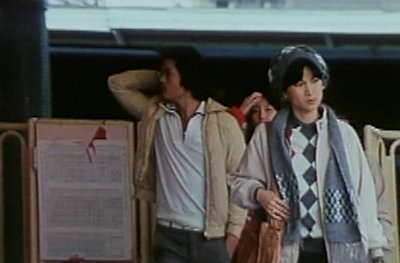 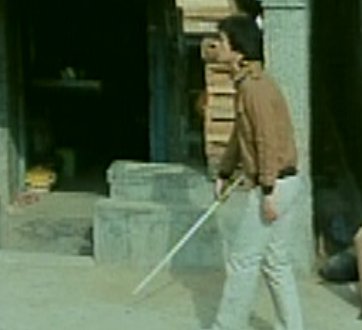 I am not comfortable talking about this because a) I have been sighted my entire life and b) I do not know much about the experience of blind people in Taiwan, but I am also not comfortable ignoring this.

There are times in the film when people treat blind!Jintai as an object instead of as a person with agency. I find it plausible that some Taiwanese people treat blind people this way (there is a reason why Taiwan has disability rights activists), so I do not fault the film for showing this. However, the film depicts this as being cute … and I do not think it’s cute.

There is also, of course, the fact that Jintai regains his sight during the film. On the one hand, the film depicts Jintai being fairly content as a blind man, which is an improvement over stories where blindness is depicted as being TEH MOST TRAGIC THING EVAAAAR!!!! On the other hand, the film does not explain why Jintai decided to have the operation, since the underlying assumption is that all blind people want to be sighted. I have no objection to people having operations to restore their eyesight, or to having this happen in stories, but I do object to the underlying assumption that this is the only way to address blindness.

Speaking of blind people and movies … Tommy Edison is a good film critic.

This film was made in 1981, so it gives me a chance to see how much Taiwan has (not) changed.

The scenes set in Taipei in particular brought feelings out of me. The Taipei scenes are set in and around Taipei Main Station, which is the same area I lived in when I lived in Taipei. The train station itself has been completely rebuilt since the movie was filmed … yet some of the trains are still the same! Yep, some train cars from the 1980s are still in service today in Taiwan.

Taipei Train Station does not look like this AT ALL today.

I was also impressed by how little February 28 Peace Park has changed since the 1980s, even though the name of the park itself changed (in the film, it is called “New Park”).

That bridge, on the other hand, looks just the same today as it did in the 1980s.

Is it a great film? No. Is it a good film? Yes. I enjoyed watching it. Part of my pleasure came from recognizing different parts of Taiwan and Taiwanese culture, but even if I couldn’t tell Taiwan from Thailand I think I would have still enjoyed this quiet, whimsical film.

Sara K. rather enjoys going to abandoned military sites in Taiwan. Recently she visited the coastal town of Shenao where she went to an area formerly restricted by the military—and saw cool-looking network of tunnels left by the military within the unusually-shaped rocks (she did not go inside because the entrance to the tunnels said “Danger: Do Not Enter”).