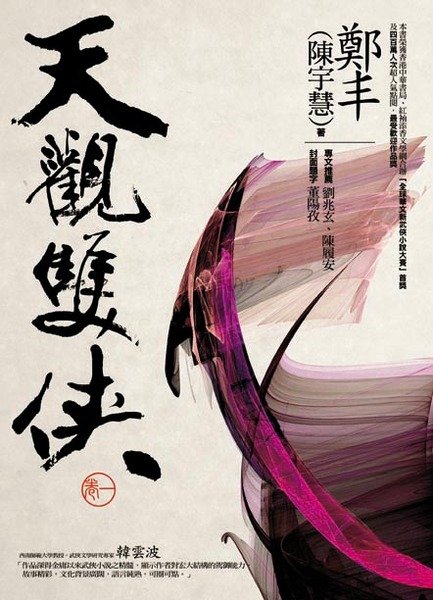 On Tuesday, I introduced Passionate Wastrel, Infatuated Hero. Because there is very little information about the novel available in English, I split this post into two parts. This is part two.

First of all, this is a novel that MOVES. Before the reader is five pages into the novel, an innocent girl witnesses a murder. From that point on, the story does not slow down very much, and generally only when it needs to slow down. There are a few sections where the plot loses a little momentum—particularly when focusing on Ling Haotian’s moping over Zheng Baoan—but just when I think the plot might actually drag, a new plot twist bursts in with a BAM!

One reason the novel moves so well is its accessible writing style. I would not go so far as to call it a plain writing style, but the literary flourishes are generally playful in nature. For example, there is a scene where Zhao Guan and Ling Haotian seem to be in a competition to spit out the most chengyu. However, when Zheng Feng is not having fun with words, the language is very direct and to the point.

The most enjoyable set of fights for me was the poisoners’ tournament. It has novelty—the contestants duel by trying to out-poison each other instead of using direct combat. It has all of the classic psychological appeals—our protagonist is the underdog (Zhao Guan is the least experienced of all of the contestants) and the stakes for him are really high. And because he is the least experienced of the poisoners, he needs to rely on his wits to win, which is a lot of fun for the reader.

Fighting is a central part of Ling Haotian’s development as a character. Training is how he (tries to) take his mind off of his problems, and as a wanderer he needs to fight to defend himself. It is when he wins a tournament—not of poisoners, but of the finest fighters in the martial arts world—that everybody, including himself, finally realises that he is himself and not merely the son or brother of so-and-so.

One of the reasons I was so interested in reading this novel was, being written by a female, I hoped it would be less patriarchal than other wuxia novels I’ve read. Is it feminist? On the surface, no. But there are some very interesting things beneath the surface…

The two main characters are male, and they both get lots of attention from beautiful women, which makes it seem like a typical harem fantasy wuxia aimed at straight males. However, the standard wuxia-harem-fantasy-for-straight-males tends to feature a man who, while strong, is not particularly handsome, and the women who fling themselves at him tend to be young chaste maidens (please note that I use the word “tend”—of course there are exceptions). Zhao Guan, on the other hand, is so gorgeous that the novel specifically states that 80% of the young women he encounters gets a crush on him. I have come to the conclusion that he probably looks like Hu Ge. 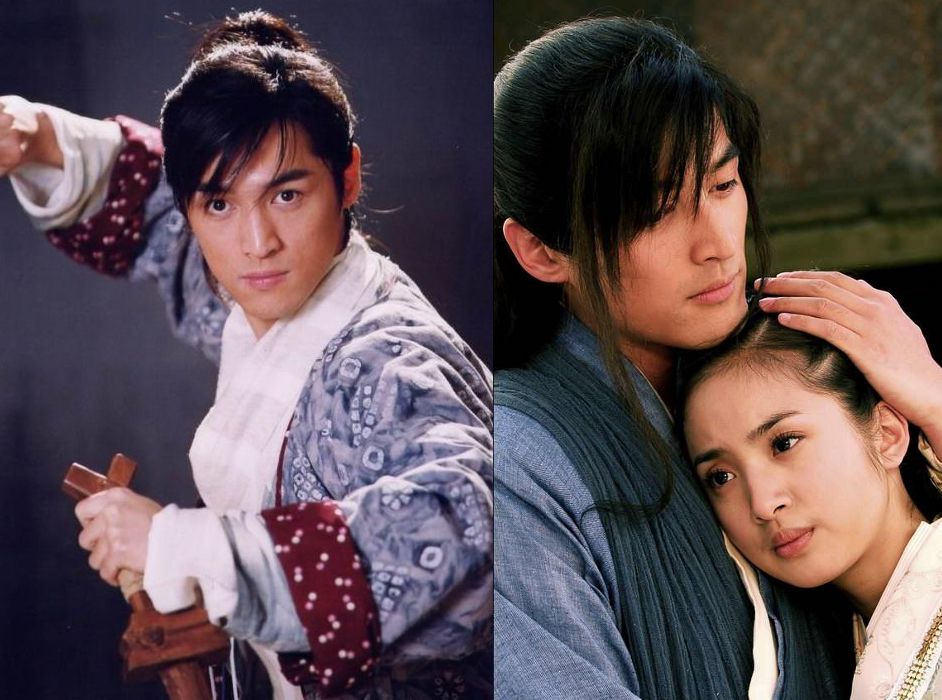 Even with his looks, he still has to work at getting so many women, unlike the typical wuxia hero who basically has women fall into his lap. And, much as he does not like it, he often has to refrain from pursuing certain women for pragmatic reasons. Most wuxia heroes do not put so much thought into which women to pursue or not pursue—when they do refrain, it’s usually because of sexist cultural programming, not because they actually considered what might be in his or her best interests. Of course, if they actually thought about it before entering into certain problematic relationships, there would be less dramatic conflict, whereas making decisions based on sexist programming tends to increase, not decrease, dramatic conflict.

Zhao Guan of course prefers women who a pretty and not evil, but he does not care about their prior sexual history, or even if they have other sexual or romantic relationships (well, he does care about their other relationships … but in a “I won’t let him hurt her” sense and not a “how dare she have another man” sense). This lack of double standard is rather refreshing. He even takes a woman who had kidnapped and tortured him as one of his lovers. And while he does care about looks, the most beautiful women in the story are immune to his charms for some reason (*cough* the Ling brothers *cough*). This does not look so much like a fantasy for straight males to me. This looks like a fantasy for straight fangirls who want a hot guy who won’t turn them down.

What about straight fangirls who are not physically pretty? They have Ling Haotian. The most beautiful women in the story all fall for him or one of his brothers, not Zhao Guan. Meanwhile, Zheng Baoan, while not ugly, is said to be the plainest-looking young woman in the story. Yet she is the only woman that both Ling Biyi and Ling Haotian want. Even though they can get women who are far, far more beautiful. And they are both hot dudes. This is unambiguously a fantasy aimed at straight female readers.

Speaking of Zheng Baoan, she’s a cool character herself; she’s sweet, reserved, feminine, and tough as nails. Ling Haotian says she is far braver than he (I agree). Whereas Ling Haotian generally runs away from problems, Zheng Baoan confronts them. And while he’s busy angsting over his feelings for her, Zheng Baoan is too busy saving his life to indulge in angst. I like characters like this because they illustrate that courage is just as compatible with femininity as with masculinity.

And then there’s the gender-reversal in Zhao Guan’s story. First of all, instead of being a girl who has heard her parents say they wished she were a boy, Zhao Guan hears his mother wishing she had a daughter, and the other people who take care of him as a child keep on saying it is such a pity he is not a girl. Wuxia novels have no shortage of women who, for various reasons, dress and try to pass as male. No woman does that in this novel. Instead, it is Zhao Guan who sometimes tries to pass as female. His reason is very practical—he needs to hide from his enemies, and it is sometimes safer for him to present himself as female than male. However, he feels no shame in dressing as a woman. This reflects that he really, really does think females are equal to males—he has no reason to be ashamed of being perceived as female. Now count the number of straight men in your life who would not experience any shame or embarrassment if they had to dress up and pass as women.

And speaking of gender reversal, there’s Zhao Guan’s mother herself. She basically lives the live of a male wuxia hero without being male. She overcame childhood tragedy, mastered various martial arts skills, rescues the weak and innocent, punishes wrongdoers, became the leader of a martial arts faction, drinks alcohol, and has her own (reverse) harem. It’s a pity that she has to die so early in the novel … I’d be willing to read a novel which features her as the main character.

How the Novel Made Me Feel

Back in the later years of elementary school and in middle school, I voraciously gobbled up whatever decent-or-better fantasy novels came my way. I did it because it went beyond fun. I lived the exciting adventures of those characters.

Reading this novel brought that feeling back for me. I read this novel at a steady clip of about 145 pages per day—which may not seem like that much until you realize a) I didn’t start studying Chinese until I was in my 20s and b) I often had to put the book down to savor some bit which had captured my imagination. This novel dominated my life while I was reading it, and the story is still ringing through my mindspace.

And … CURSE YOU ZHANG FENG FOR WRITING THAT ENDING! YOU MADE ME CRY!

The only part of this novel that is available in English (or any other non-Asian language) is the excerpt I translated for this review. There is not even an unfinished fan translation.

I know the handful of wuxia novels which have been published into English or French have not been best-sellers (if any wuxia novels have been published into any non-Asian languages other than English or French, please comment—I want to keep track of all wuxia novels published in non-Asian languages). However, just as contemporary manga tends to be more commercially successful in English translation than classic manga, I suspect contemporary wuxia might be more commercially successful than classic wuxia in the English-speaking world. I think a publisher could make money bringing out this novel in English if they marketed it properly. Now, once enough people in the English speaking world are hooked on wuxia, the classic novels could come out, heh heh heh…

At the very least, it is available in both simplified and traditional characters. For those learning Chinese as a foreign language, I think this novel is a good pick because it has such an accessible style. Is it the easiest novel to read on linguistic grounds? No. But it is entertaining and fast-paced, which in my opinion is more important than whether the grammar or vocabulary are easy. And compared to many other wuxia novels, the vocabulary and grammar are not hard.

I think it’s pretty obvious at this point that I love this novel. It is a monumental artistic work that a literature professor would approve of? No. But much as I love high-brow culture, sometimes I want a story which will just suck me in. This story did that. If you can, you should give it a chance to suck you in too.

Sara K. used to be really into fantasy novels. Looking back, she wonders how she found time to read all those novels considering that she also had to go school, do homework, sleep, and so forth. It gives her hope that she might be able to actually find time to read many of the wuxia novels on her reading list. And she definitely plans to read Zheng Feng’s other novels.