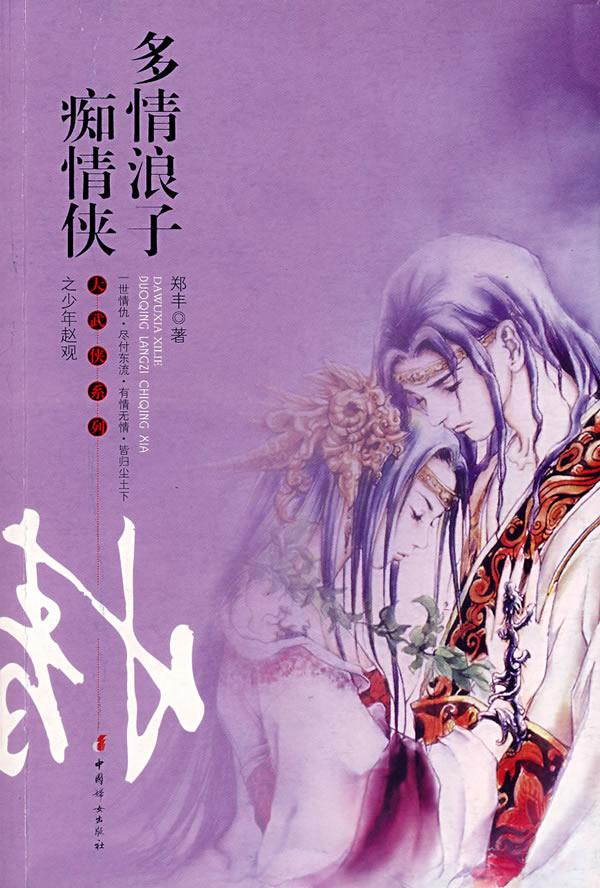 There is not much information available about this novel in English, so I am giving it a more thorough treatment than usual, and making this a two-parter.

Now that you’ve read that, you should have some idea what the novel is like, so you are ready to read this review.

Wuxia has historically been dominated by male writers. To this day, if you ask somebody who is familiar with wuxia to name five writers, there is a good chance that that person will name five male writers. Fortunately, times are changing. Zheng Feng (the pen name of Chen Yu-hui) is, at least in Taiwan, the most popular contemporary wuxia novelist … and she’s not male. Passionate Wastrel, Infatuated Hero is the novel which put her on the map.

Zhao Guan loves drinking alcohol, and he loves having sex with pretty women even more … so he’s built up a reputation as a bad boy. Much of the plot of the novel follows this pattern: Zhao Guan meets a pretty woman, the pretty woman is in trouble, Zhao Guan gets her out of trouble, something happens between them (whether it’s sex, a kiss, or merely lustful fantasies on Zhao Guan’s part), and the plot moves on.

Even though he’s promiscuous, Zhao Guan does not come across as a creep because he cares a lot about what women think and how they feel. When he gets pretty women out of trouble, he does it because he does not like seeing people in trouble, not because he is trying to get sex—nor does he think they owe him sex if he does rescue them. Of course, if they do decide to have sex with him anyway, it certainly makes him happy. Furthermore, he really gets off making women happy. Of course, because he is such a good-looking young man, he makes many women happy (at least in the short term) by letting them into his bed. He often looks to the women in his life, whether or not he’s having sex with them, for advice when he has a problem of his own. And finally, he’s honest with all of his love interests—he tells them that he sleeps around, and that he is not going to stop.

However, while he seems carefree on the outside, he is haunted by the brutal murder of his mother. Years later he can still describe the scene in gruesome detail. He was lucky to survive himself. He wishes to find the killers and get revenge … but the killers left no clues, and he knows that even if he knew who the killers were, he is not match for them. Furthermore, he is almost certain that they are pursuing him in order to “finish the job”—in fact, he has numerous close calls. Thus, he often travels incognito and goes by false names lest he suffer his mother’s fate.

Ling Haotian is the son of Ling Xiao and Qin Yanlong (two of the most highly respected martial artists and doctors of the era) and is the younger brother of Ling Biyi and Ling Shuangfei (twin brothers who are the most promising and respected young martial artists of the generation). Ling Haotian feels it is impossible for him to live up to such high standards. He often withdraws himself, lest he disappoint somebody by not being as awesome as the rest of his family. He is very close emotionally to Zheng Baoan, his mother’s apprentice, and eventually gets a major crush on her. However he cannot bring himself to tell her how he feels.

Then the bombshell falls. Ling Haotian’s older brother Ling Biyi—who everybody claims is the most wonderful young man in the world—confesses his love for Zheng Baoan, and asks for her hand in marriage. Everybody says that Zheng Baoan is really lucky. For example, Zhao Guan says that if he were into men he would definitely fall in love with Ling Biyi. It is inconceivable to everybody—including Ling Haotian—that Zheng Baoan would not return Ling Biyi’s love. Ling Haotian cannot stand to see his brother and Zheng Baoan together … so he runs away from home.

This, of course, is the beginning of his adventures. He wanders Jianghu without any particular goal, other than trying to forget about Zheng Baoan and his brother (he fails, of course). During the course of his travels, he has to fight a lot, and also ends up learning a lot of martial arts. Gradually, he gets better and better. He is so preoccupied with his unrequited love that he does not notice it when his abilities surpass that of his celebrated brothers. A couple of women hand Ling Haotian their hearts, yet the only woman in his heart is Zheng Baoan.

Ling Haotian watches his brother, Ling Biyi, die in his arms, murdered. This makes it seem even more impossible to Ling Haotian that he could ever be with Zheng Baoan. He feels he cannot love her without wronging his deceased brother (in traditional Chinese culture, marrying your brother’s widow is considered a major taboo). When Ling Haotian brings his brother’s body back home, his parents treat him as a monster. It turns out that his other brother, Ling Shuangfei, had accused Ling Haotian of committing the murder out of jealousy over Zheng Baoan. Furthermore, Ling Haotian is framed for many other murders, meaning there are many, many martial artists seeking to get their revenge. Ling Haotian wants to avenge his brother’s death and clear his name—until he finds out that the man who murdered Ling Biyi is none other than his other brother, Ling Shuangfei!

Does he murder Ling Shuangfei (his own brother), or leave the death of Ling Biyi (who is also his brother) unavenged? Should he tell everybody the truth about the murder? Would anybody believe him?

Yep, in Ling Haotian’s life, when it rains, it pours.

So that is a basic overview of the novel. In Part II, which will appear on Friday, I will express my opinion. Until then…

What is your impression of this novel based on this overview?

UPDATE: Part II is up!

There is no question about it now … Sara K. is now officially a wuxia fan. The more she learns about wuxia, the more novels she wants to read, and her reading list is growing faster than she can actually read them. And she still wants to read other things. Maybe she will one day grow tired of wuxia novels, but she thinks that will take a while.