Welcome to the May installment of BL Bookrack! This month, Michelle takes a look at est em’s Apartments of Calle Feliz (JManga) and the first volume of The Scent of Apple Blossoms (SuBLime), while Melinda checks out western BL webcomic Honeydew Syndrome. In Brief: Doukyusei from JManga, and My Sweet Home from the Digital Manga Guild. 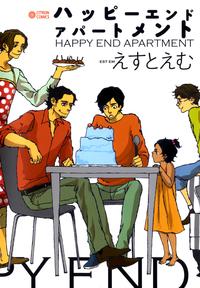 Apartments of Calle Feliz | By est em | Published by JManga – It seems that every time I turn around I am thanking JManga for something these days, and this quirky set of interconnected short stories from est em can now be added to the list!

Life’s not going well for aspiring novelist Luca. His editor is dissatisfied with his work, and he’s just been kicked out of his home because his boyfriend found a new guy. When he responds to a flyer advertising a room for rent, he ends up living with the landlord, Javi, instead. Luca’s intrigued by Javi, but keeps telling himself not to care about him, because it seems obvious that Javi has ousted a past lover from his apartment and Luca knows what that feels like.

Still, Javi is an inspiration, and his suggestion that Luca write stories with happy endings for the tenants of the apartment building—located on Calle Feliz (or “happy street”)—results in the tales included here. Residents include Dino and Salvator (a fashion designer and his nudist recluse boyfriend), Noe and the Twins (a man unable to decide which of a pair of twins he prefers), Matias and Pepe (a boy who reminds a puppetmaker of his lost love), and Jose and Eva (a hard-of-hearing guy and a crossdresser with a bunch of noisy roommates). A story about Javi and Luca and Javi’s past rounds out the collection.

The stories themselves are generally fun and charming—though I was disappointed that the Jose and Eva story seemed to end so abruptly—but what’s even more intriguing is wondering how much of this actually happened and how much is Luca’s imagination. Did Pepe’s lover really return to him? Did the designer and the nudist resolve their problems and live happily ever after? It’s nice to imagine they did, but est em floats the possibility that maybe things didn’t actually turn out so well, which is a narrative trick I just love.

This may not be as dramatic a collection as something like Seduce Me After the Show or Red Blinds the Foolish, but it is definitely worth reading all the same. 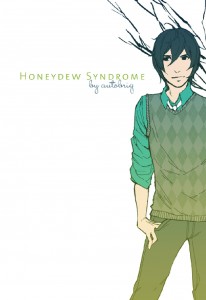 Honeydew Syndrome, Vol. 1 | By New Shoe | Rated Teen – A while back, I got an e-mail asking if I’d be willing to take a look at a North American comic called Two Keys from the creative team New Shoe (Chloe Chan and Aliena Shoemaker). I agreed. Included in the package when it arrived was the first print volume of the duo’s older BL webcomic Honeydew Syndrome, which immediately stole my attention with its sparse, melancholy cover art and manga-influenced character designs. I couldn’t help but read it, and though its promising first impression was marred somewhat by a small rash of typos and lettering mishaps, the truth is, I found myself rushing to my computer the moment I finished in order to read the rest (and I’ve just purchased volume two, which promises a bonus chapter and some prose stories). It’s just that charming.

So here’s the setup: High school student and emo-in-denial Metis (yes, like Athena’s mother, for those of you who are into Greek mythology) accidentally witnesses popular jock Josh being dumped by his cheerleader girlfriend, which somehow lands him in the way of Josh’s angry fist. To make things worse, he then gets paired up with Josh for a major school project. Though Metis is initially afraid for his well-being, fear soon turns to anger as he realizes that Josh has no idea who he even is, let alone that he recently punched him. Since this is BL, we know that teen angst and misunderstanding ultimately lead to love, but in romance, of course, it’s all about the journey, and this one is pretty delightful all-around.

Though romance is definitely the destination, what makes this series’ journey so worthwhile is its focus on friendship—specifically that between Metis and his collection of outsider friends, and especially his long-time best friend, Charles. Metis and Charles, with their impenetrable universe of two, embody all the best parts of teenage outcast friendship, including all the conversational shorthand, unspoken loyalty, and weirdly casual sexual tension that so often comes with the package. Other standouts include quietly colorful Jay and witheringly honest Sarah (who appears in later chapters).

New Shoe’s artwork lacks polish (at least in this early work), but it’s also unfailingly expressive, and the visual storytelling is solid. The characters’ emotional trajectory is crystal clear, panel-to-panel, even in the artwork’s most uneven moments. If I had the opportunity to register only one complaint regarding Honeydew Syndrome, it would be that there simply is not enough of it. The series ended abruptly in 2009 amid discontent on the part of both fans and creators, as evidenced by comments posted to its fan community at the time. But whatever controversy the series once generated, the existing work is well worth reading.

With its character-driven approach and thoughtful storytelling, Honeydew Syndrome holds its own alongside my small collection of Japanese and Korean favorites. Recommended. 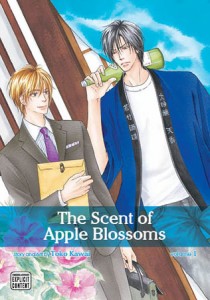 Born in America, salesman Haruna Mutsuki is a little more uninhibited than most, and when he meets the intriguing grandson of a sake brewery master during the course of business, he’s pretty forthright with his interest. The grandsom, known for most of the volume only as Nakagawa, presents a cold demeanor, but proves to be kindly in certain situations. I swear, never has the act of remaining sober so as to drive someone else home had so much sweet, romantic significance.

While this is definitely a romance, Kawai gives the story space to breathe and allows her characters ample time and opportunity to establish their personalities. While Haruna looks like the stereotypical uke, for example, and requires a bit of nursing on several occasions, he’s actually a pretty confident guy who’s very capable at his work. Nakagawa, meanwhile, is a ringer for the stereotypical gruff but sweet type who will come around eventually, but he’s actually got some legitimate reasons for shying away from Haruna’s romantic advances.

When the two eventaully get together (not really a spoiler in this sort of story), it’s a big leap for both of them that Kawai’s storytelling has allowed readers to really understand and appreciate. Although I get the sense that she was fine where the story ended in this first volume, The Scent of Apple Blossoms is actually a continuing series. The third volume was just released in Japan earlier this month, and though SuBLime’s digital release calendar doesn’t show volume two yet, I am hoping the wait won’t be too long.

Doukyusei | By Asumiko Nakamura | JManga | Rated Teen Plus – As far as I’m concerned, when it comes to romance, the more awkward the better, and that goes double if the characters are teens. Fortunately, Doukyusei gets this exactly right, and really so much more. Emotionally offbeat in the vein of Rihito Takarai & Venio Tachibana’s Seven Days series (but without the contrived setup), Asumiko Nakamura delicately explores the awkwardness of first love with a kind of frank delicacy, aided greatly by her unique art style and gangly character designs. The story’s themes and school-based situations may be standard genre fare, but Nakamura’s storytelling is decidedly not. Highly recommended. – Melinda Beasi

My Sweet Home | By Kai Nanase | Digital Manga Guild | Rated Mature – This BL one-shot about a young real estate agent who finds himself showing luxurious apartments to an ex-lover sounds promising to start. (Adults with jobs? Check. Workplace awkwardness? Check.) Unfortunately, the book’s summary is its highlight, leading quickly to rushed, unsatisfying romance, incoherent plotting, and artwork so generic that only the change in main character names really distinguishes the book’s title story from the shorter one-shots that follow. Digital Manga Guild localizing team Kaedama Translations does their job, but there’s only so much that can be done with a clunker like My Sweet Home. With so much BL manga now flooding the market by way of the DMG, mediocre fare like this holds very little appeal. – Melinda Beasi