Back in February I shared my thoughts on the first live action Death Note & Gantz films, and honestly, not a lot has changed since I watched the sequels. (If you haven’t seen either, that post should be sufficient. This post assumes franchise knowledge for both.) 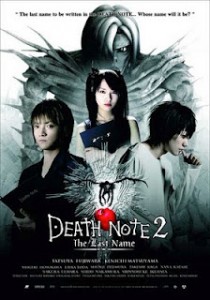 I did find the overall experience surprising. My snap judgment was that I would really enjoy Death Note, but I would find Gantz a little too dry & sci -fi for my taste. Instead, I frequently disliked Death Note, but I thoroughly enjoyed Gantz. There were two key differences for me between the two.

First, in Death Note, we are watching the manipulators from their areas of power, whereas in Gantz we are with the manipulated, watching these ordinary people trying to do their best in an extraordinary world. Second, the respective morality of the films was very different. In Death Note, even though Light is being pursued by authorities, the film accepts his decisions to kill in a way that I was uncomfortable with. Plus, an element of the Death Note is that the holder can kill from afar, so he doesn’t have to get his hands dirty. In Gantz, however, the characters brought back from death to fight are conflicted about killing, and when they choose to follow the instructions of Gantz it is for a clear goal: to earn enough points to either bring back someone else who has died, or so they might free themselves from the program. And even with this, in the second Gantz film, they are questioned outright about why they’re fighting, and it is clear that they question this themselves.

As for particulars of the films themselves…. 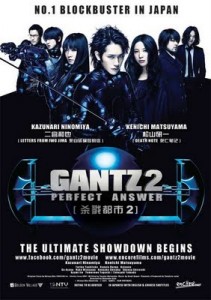 In Death Note: The Last Name

, the production value runs the gamut from soap opera to video game. Story-wise a few new complications are added to the rules of the Death Note (and a second Death Note is introduced), though none of this really challenges L, who works intuitively. The story tension is meant to come not from whether or not L will know that Light is Kira, but whether or not he will be able to prove it. However, Light and his various associates, be they gods of death or devoted fans, continue to remain one contrived step ahead of L’s ability to discover hard evidence.

As for Gantz: The Perfect Answer

, it was a satisfying conclusion to the story. New elements were brought in, like people who are investigating the rumors of Gantz and the possibility that these dead people are still alive, and as aforementioned, the fighters deal with some heavy questions about who they are fighting and why.

There are a number of excellent action sequences involving a subway car, though there were definitely some moments where I wished I was watching it in the theater. Action on DVD frequently goes on too long to hold my interest, but that’s a personal thing. Overall, I enjoyed both Gantz films, and they’ve got me interested in the anime and manga, which is a huge success. 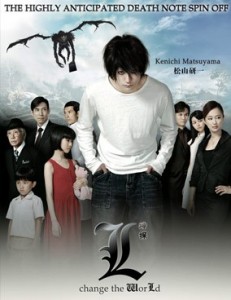 On a whim I picked up L: Change the World

at the library, and to my surprise, very much enjoyed it. It’s an L-specific spin-off of the Death Note live action films, and opens just before the Kira story begins. It starts with L working with Naomi on a case, and I actually really wished we could have had more of that. Naomi is a fun, capable character, and I enjoyed the taste we got of their relationship. If anyone could tell me if that is expanded on in the anime or manga I would really appreciate it.

The film quickly leaps through the timeline of the first two films, and the bulk of it takes place after. L takes some time finishing off odds and ends of cases, and this is his last big case before his chosen death comes. Essentially it’s a completely unoriginal bioterrorism-type outbreak story, but I enjoyed getting to know more about L outside of his entanglement with Light, especially insofar as it gave us a better look at the system L works within. The villains have a pretty traditional plan to destroy the world so they can remake it, but at least in the process they have to engage with the world, which makes them much more interesting than Light, hiding behind his notebook.

It’s a testament to the work Matsuyama had done with the character of L over the prior two films that when he engages in simple human behaviors it’s incredibly strange to watch. When he’s simply being outside in the world, it made me nervous. I wanted to encase him in bubble wrap & return him to his hermetically sealed chamber, full of sweets & computer monitors. In the course of fighting the virus, he has to interact with children, and it’s a great twist to watch this child-like character struggle to connect. As a bonus, children are the perfect people to ask L all the questions we’ve had through the prior two films. Why does he eat so much sugar? Is he even capable of standing up straight?

In the end, L: Change the World was a treat for me for making it through the other two Death Note films. It wasn’t great, and it certainly wouldn’t stand on its own, but if you really wanted more L, it’s a fun little diversion.