Continuing the series of responses to the Dear Author series on fanfiction; this is Part 2 of a 3-part response to “Fanfiction and Morality.” (Part 1 is here!)

To recap, the author of this post, Has, argues that “Taking an entire fanfiction story and turning that into a published book is:” 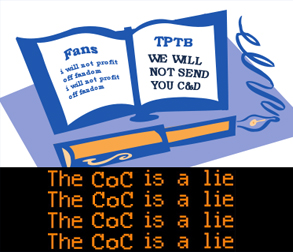 The CoC (my oh-so-hilarious abbreviation for ‘fan code of conduct’) is a lie meant to keep fandom protected from copyright holders, but the reality is that it’s the copyright holders who aren’t protected—not because of any malice on the part of fans, but because of the fact that modern copyright law upholds the value of transforming existing works.

Copyright will always deter straightforward derivative rip-offs of your work, but it doesn’t guarantee your work can’t be really transformed and that money won’t be made off that transformation. The copyright holder can be legally subject to having their work taken and revamped and published in (at least?) 4 ways:

Obviously the law doesn’t think transformative fair use threatens the copyright holder. And historically the copyright holders themselves haven’t seen it that way either. I just happen to be re-reading Jerome K Jerome’s classic satirical memoir Three Men In a Boat (To Say Nothing of the Dog), which was originally published in 1889, sold a bajillion copies, and has never gone out of print since. For the 1909 edition (which is printed in my copy, which incidentally was published by Barnes & Noble), Jerome writes:

The world has been very kind to this book. Mr. Arrowsmith speaks only of its sales in Great Britain. In Chicago, I was assured by an enterprising pirate now retired, that the sales throughout the United States had exceeded a million; and although, in consequence of its having been published before the Copyright Convention, this has brought me no material advantage, the fame and popularity it has won for me among the American public is an asset not to be despised.

I find it wondrous and wonderful that one hundred years ago the concept of copyright could so amiably co-exist alongside the idea that monetary value was not the only kind of value that mattered in the dissemination of an author’s works and reputation throughout the world. And it still can and does.

In contemporary Japanese culture, copyrighted manga is sold in stores right next to fan-produced doujinshi of that manga. Wiki notes that doujinshi artists “rarely secure the permission of the original creator,” and that the largest doujinshi con has over a million freaking people in attendance. Nothing about the practice of fanwork is secret or hidden, and neither are fans prevented, either legally or socially, from making money off what they do. As MB’s own Brigid Alverson writes:

Current copyright laws allow publishers to tolerate a certain amount of remixing of copyrighted characters. …on balance, many observers think that the doujinshi phenomenon is good for the manga market, because it builds interest for the series and characters and provides a training ground for new creators—perhaps the best known being Rumiko Takahashi, creator of InuYasha and Ranma 1/2, who got her start creating doujinshi under the guidance of Lone Wolf and Cub artist Kazuo Koike.

Let’s make this even clearer: in Japan, E.L. James could write and sell Twilight doujinshi and no one would prosecute her for it because the culture, production, and sale of doujinshi adds value to Stephenie Meyer’s original product. In Japan, she wouldn’t even have to change the names to a) profit off her work AND b) increase the value of SMeyer’s work.

I’m not making this point to argue that SMeyer shouldn’t get to prosecute people who infringe upon her copyright. I’m arguing that what’s happening here is not really infringement, because even when it is for profit, it still increases the value of the original product.

My friend Silvia Kundera has a quote on my ‘fanfic is okay‘ post that I think is relevant here:

I am actually the proud owner of an authorized & published One Tree Hill Brooke/Lucas, implied Peyton/Nathan novel that I bought at fucking Borders. And it’s ‘real’ fanfic, man. It’s a pairing-centric fix-it that does a shippy re-write on Season 2. for the author’s preferred couples. It’s exactly what I’d expect to bookmark on delicious when I’m in the mood for het. The only difference between this and a 50k Sheldon/Penny fanfic is that:
— one of these is on my bookshelf & someone got paid for it;
— one is on my computer & someone did it for love.

Has’s argument that publishing fanfic as origfic is “a cynical ploy to market books” fails to take into account the value-added worth of a book that can be tied back to a previous source. The One Tree Hill franchise obviously thought that paying an author to write a shippy fix-it fic would add value and meaning to its overall product. How, in theory, is this any different from EL James publishing 50 Shades and then linking it back to Twilight?

For that matter, in what kind of warped thought process does a for-profit novel with no obvious connection to a franchise get branded as less legitimate than a for-profit novel written directly for a franchise? One is a series tie-in, one is a bestselling novel that you would never connect to the Twilight series if you didn’t already know through word of mouth and the media that it began as Twilight fic. The book 50 Shades of Grey has literally nothing to do with the book Twilight.

And I’ll add: the DA side by side comparison is also an epic example of rudeness, since they obviously acquired their copy of the fanfic after the author had removed it from the web. In other words, they dug up her deleted fanfic just because they could. There is absolutely no reason for a side-by-side comparison of MotU and 50 Shades except to attempt to humiliate and shame the writer, and to imply that all she did was change some names around, AND to imply that changing some names is all ANYONE does when they convert their fic to original fic. That is. just. SO INSULTING. It’s so insulting that I’m not going to devote a whole separate post to responding to it because I think it’s completely duplicitous.

Because you know what words they didn’t do a find/replace on? VAMPIRE. WEREWOLF. SPARKLE. FORKS. Possibly because none of those central elements of Twilight are anywhere to be found in 50 Shades. Oh my god I just. okay. moving on.

Is the argument here honestly that the success of E.L. James’ novel is somehow a shameful thing because it dares to piggyback on Twilight’s success?

Um. Then what the hell has the publishing industry been doing since 2005?

Because correct me if I’m wrong, but I thought we’d spent the last 7 years seeing hundreds upon thousands of Paranormal YAs flooding bookstores. I thought I’d spent years seeing bookstore displays using “If you liked Twilight, you’ll love this!” as a promo to sell books. I thought I’d seen dozens of books being reprinted specifically to have iconic red and black covers. I thought I’d seen Wuthering Heights, Pride and Prejudice and Romeo and Juliet all being explicitly appropriated and repackaged for teenagers as books Bella and Edward love. Did I just make all these things up? 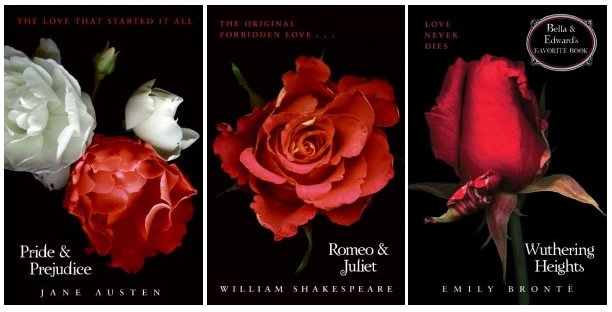 It is intellectually dishonest to handwring about undue influence because a few dozen of Twilight fandom authors are owning up to doing, explicitly, what the publishing industry has been blatantly encouraging the entire industry to do for years. Why on earth shouldn’t E.L. James market her book’s appeal to Twilight fans, given that that’s exactly what publishers want a book to have?

And the thing is you usually never know what the sources of influence are as long as they aren’t disclosed and aren’t completely overt or apparent in the work itself. What if Left Hand of Darkness really is a Star Trek fanfic? What if Inception really is unauthorized Paprika fanfic? After all, Nolan calls it one of his “principle influences.” What if “Firefly” really is unauthorized fanfic of “Cowboy Bebop? After all, Joss said it had anime influences. I’m pretty sure no rights or attribution was ever given in these cases. Does that mean the influence wasn’t felt? Nolan even said he based the character of Ariadne on the main character of Paprika. But it’s okay, because clearly they’re just general tropes, right? Much like the character trope of a young spunky heroine falling in love with a seductive, dominating hero….

In all of the cases I mentioned above, there is a documented influence because the creator was familiar with the previous work and its genre conventions. Are these things fanfiction? A better question is how aren’t they fanfiction? And what’s more, how don’t they add value to the original work? I like these specific examples because I watched Cowboy Bebop after I heard Firefly was based on it. I watched Paprika and the film Dark City because I heard Inception was based on them both. I finally decided to take the plunge and watch Original Trek after I read Left Hand of Darkness. Even when influence isn’t openly claimed and owned up to, value still reflects upon the original inspiration.

And whether or not Twilight fans and critics want to admit it, there’s nothing harmful about 50 Shades’ success. Stephenie Meyer’s fans aren’t going to stop being fans of her books just because 50 Shades exists. But fans of 50 Shades might decide to go back and read Twilight, if there’s anyone out there who hasn’t yet. These two different novels can co-exist, just like they already do in Japan. These works amplify each other, to the credit of all.

Later: Part 3—the “morality” of all this, and new ways to think about creative autonomy!