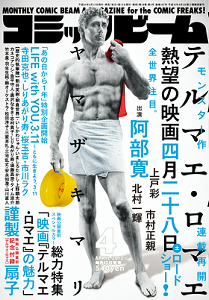 At a mere 25,000 copies sold every month, Comic Beam is not a contender in sales in any category of manga magazine, but that’s not a concern for the creators and editors of Beam – instead, they are playing to the small, but hardcore comics-reading audience,people who don’t care what category a manga is but just want to read good stories. Nominally listed as “seinen” (for young men,) along with Kodansha’s Morning 2, Shogakukan’s IKKI and Hakusensha’s Rakuen Le Paradis, Ohta’s Manga Erotics F, Comic Beam can easily be considered part of a small, but slowly growing genre of manga not limitedby gender or age, but is targeted to “whoever reads it.” I have taken to referring to these magazines in my head as the “fifth column” (i.e., not shoujo, shounen, josei or seinen.)

Comic Beam is the home of a number of stories that have been published in English. Kaoru Mori’s story about love between different classes in Victorian England, Emma, wasthe first to make its way here, through CMX’s beloved but unfortunately unsuccessful edition. Astral Project (Marginal and Syuji Takeya), Bambi and Her Pink Gun (Atsushi Kaneko), King of Thorn (Yuji Iwahara), and Fancy Gigolo Peru (Junko Mizuno) have allbeen released in English. Eagerly received, and from Fantagraphics is Takako Shimura’s award-nominated tale of tweens dealing with gender transitioning, Wandering Son. Currently running (and adorning the cover of the image above) is Mari Yamazaki’s award-winning Thermae Romae, a story that whimsicallycombines modern Japan and ancient Rome through their shared cultures of bathing. (This series is about to be launched as a  a live-action drama and anime in Japan.) I was both surprised and pleased to find Izumi Takemoto contributing a charming little Heidi-esque romp, Akane Kono Mahou, to the current lineup.  Kaneko Atsusuhi’s dark speculative fiction manga Soil has generated some press on both sides of the ocean as well.

Enterbrain has a website, mostly to provide information for potential contributors.There are no chapter previews and currently no downloads. It’s a sparse, somewhat depressing site. Given the “experimental” nature of the work in Comic Beam, it would probably be a good choice to offer example chapters, but then, the audience already knows what it likes.

Taken as a whole, it’s easy to label Comic Beam an “art house” comic magazine. There’s room for the sweet, the grim, the wacky, the serious, real and fantastic, all with room to explore artistic stylings and story telling techniques. Comic Beam is indeed a comic for comic freaks. People who prefer their stories formulaic and predictable need not bother. The light from Comic Beam will appeal to few, but for those few, it will be a beacon illuminating the world of manga magazines.