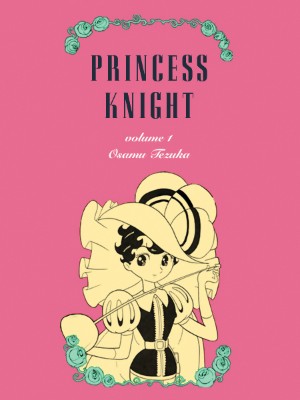 MICHELLE: As we occasionally do when the Manga Moveable Feast rolls around, Melinda and I have opted to dedicate this week’s Off the Shelf column to the topic at hand, which this month is the works of Osamu Tezuka. Specifically for our case, we’re going to be talking about Princess Knight, Tezuka’s shoujo manga about Sapphire, a princess who accidentally receives both a boy’s heart and a girl’s heart at the time of her birth, and who, when we pick up her story as an adolescent, has somewhat of an identity crisis while undergoing many wacky hardships/hijinks.

This is my first time reading the series. Whenever Ed Chavez from Vertical would solicit suggestions for Tezuka titles to license, I would always request Princess Knight. I wanted the series so much I even bought a few of the bilingual Kodansha editions. However, when I finally had both parts of the series in hand, I was content for a while to merely gaze upon them, content. And now that I have finally gotten around to reading it, I must say… I’m a little disappointed.

MELINDA: Well, as you may recall, I certainly had my issues with volume one, and these didn’t disappear when I read volume two. In some ways, I’d even say they became more pronounced. On the other hand, there were things I liked about it, so though I could characterize my experience as disappointing as well, I’m still glad I read it.

Should we get the least pleasant subjects out of the way straight off?

MICHELLE: Might as well. I guess my big problem with it is that it’s supposed to be so groundbreaking in terms of gender identities, but it actually does very little in this regard. When Sapphire has only a boy heart, she’s swaggering and brave. When she has only her girl heart, she’s weak and fragile. True, some of the growl-inducing comments do come from the villains or from those attempting to fool villains by approximating girlish behavior (“I suddenly want to take up cross-stitching and play the piano.”) but I do have to wonder how much of it Tezuka really believes, since he creates a swordswoman character, only to bedeck her armor with hearts and have her proudly admit that she’s entered a tournament to find a husband.

MELINDA: Yes, this was definitely the biggest hurdle for me as well. While I might have found it interesting to watch a character struggle with her gender identity in a society where clearly what you describe is set up as the standard for femininity vs. masculinity, that’s not really what Tezuka does here at all. Even when he has his chances to challenge these roles, he passes them up. For instance, the big female revolt that happens during the second volume seems to hinge mainly on the threat of the country’s men being left without anyone to clean their homes or look after their children. Even after it’s over, the only comment made by one of the defeated men is relief that his wife will come home and take care of the laundry that’s piled up.

I completely understand that both Tezuka and Princess Knight are a product of their time, but I’m genuinely confused as to why this seems to be held up as a great example of shoujo manga challenging gender roles.

MICHELLE: It seems very likely that Tezuka never intended it to be so, since so much of it takes a Loony Tunes approach to storytelling. Why, indeed, take a female revolt seriously? Instead, let’s play it for comedy by making the men out to be henpecked morons! That’s not to say there aren’t some darker aspects that I did like and wish could’ve been expounded upon. For example, while I don’t care about or believe in the “true love” that suddenly springs up between Sapphire and Prince Franz Charming, the characters set up as romantic rivals are actually interesting and meet tragic fates. It makes me wonder what kind of story Tezuka could’ve fashioned with Hecate and Captain Blood (aka Heinrich) as the leads!

MELINDA: Yes! Though I actually quite liked Sapphire, at least until she became completely consumed by her weirdly passive pursuit of Prince Franz, my favorite characters were Captain Blood and Hecate. I would have happily read entire books about them. I rather wished that Sapphire would ditch Franz and fall for Blood, but I suppose it was never meant to be.

MICHELLE: And, really, Hecate is probably the best example of a character who defies gender roles, since she’s perfectly happy defining herself for herself and has no wish to consume Sapphire’s girl heart (which her witch mother, Madame Hell, keeps trying to steal on her behalf) and take up some passive, “feminine” identity. She’s independent, level-headed, and one of the few truly good characters in the story. Plus, she can turn herself into a goat!

MELINDA: Speaking of all the heart-exchanging business, I’d say that probably the only time I actually appreciated it, was when Plastic ingests Sapphire’s boy’s heart, and suddenly becomes a decent man, instead of a selfish, sniveling boob.

MICHELLE: Oh yes, I quite agree! And he promptly begins championing women’s rights! This makes him the second character in the series (after Hecate) to go his own way and oppose the evil schemes of a parent. I wonder if this is Tezuka’s way of saying that the younger generation is going to get things right regarding equality whereas their parents are hopeless. 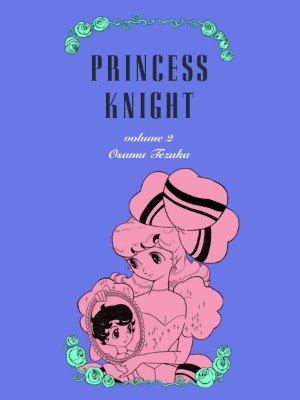 MELINDA: That may be a generous assumption, but I’ll give it to him if you will. You know, I think what’s most disappointing to me about Princess Knight is that I feel like I really could have liked it. Tezuka’s artwork is so much fun here, and so full of life. And I’m really fine with the “Looney Tunes approach,” as you so brilliantly put it. I think this manga could have been a lot of fun. But the gender issues are so profound, they kinda take over the whole thing for me.

MICHELLE: I’m not sure I could’ve liked it even without the gender issues giving me fits. The plotting is just so random sometimes. Early on, there’s a scene where Sapphire is letting herself be collected by Duke Duralumin’s men as a potential consort for his then-still-feeble-minded son, Plastic. And Franz rides in from, like, the next kingdom over to rescue her, and then rides back home again a few panels later. Or then there’s my favorite spot of wtf, the scene where Blood quickly escapes slavery by coercing a nearby beetle into chewing through some ropes. Everything’s so fast, furious, and madcap that poignant things aren’t given time to sink in.

MELINDA: Hee hee, yeah, it’s like that. Is it wrong that I find that fun? Or maybe I find it fun, because the poignant stuff doesn’t sit right. I can enjoy something that’s silly and madcap for that alone, and Princess Knight works better as that for me. Overall, I’d say I liked the silly, unbelievable parts the most. Also, I love every scene that Blood is in. Heh.

MICHELLE: It’s not wrong for anyone to like what they like! :) I’m just hard to please, comedy-wise, so many of the gags just left me blinking impassively at the page. I feel bad for being so down on Princess Knight, because now that it’s over I find myself growing fond of the idea of it again. And though it may not have lived up to its reputation for me, I nonetheless wonder if it wasn’t the origin of certain shoujo tropes, like, say, all of the guys instantly falling in love with the passive heroine, or the contingent of jealous fangirls.

MELINDA: As disappointed as I might have been with it, I really am grateful to have had the opportunity to read it. It may not be my favorite of Tezuka’s works (or really even close), but I’m quite enamored of his artwork, as always, and even now as I’m just flipping through, I’m struck by the beauty and flow of what’s on the page.

MICHELLE: Oh, I am definitely exceedingly grateful to the folks at Vertical for licensing the work and producing such a beautiful edition. I’m also pleased to note that I didn’t spot a single typo in their text, and found that the translation actually included some rather sophisticated words without any hint of awkwardness.

MELINDA: So thanks, Vertical, for giving us the chance to experience Princess Knight!

For more of this week’s MMF bounty, please visit the Osamu Tezuka MMF Archive, hosted by Kate Dacey at The Manga Critic!