Welcome to the October installment of BL Bookrack! This month, Melinda and Michelle take a look at three offerings from Digital Manga Publishing’s Juné imprint, Yakuza Café, Sky Link, and volume three of A Strange and Mystifying Story. 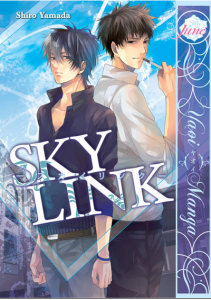 Sky Link | By Shiro Yamada | Digital Manga Publishing/Juné | Rated YA (16+) – Ritsuki Ban is a troubled young man just starting university. On his first day, he collides with a man who praises him for being his type, and who (of course) turns out to be one of his professors. The professor, Takagi, pursues Ritsuki vigilantly, despite his surface apathy. How does Ritsuki really feel?

Truthfully, there’s a lot more going on in this story than what I’ve just described, but I sort of wish there wasn’t. This story, more than any other I’ve read recently, really suffers from the limitations of being a one-shot, which means that all of its best character development amounts to nothing more than false promises in the end.

Things start out pretty well. Ritsuki is a sullen guy with a mysterious past, written just subtly enough to be more intriguing than cliché. Takagi is aggressive and over-confident, but with enough sensitivity to dodge that cliché as well. Their relationship develops slowly (and reluctantly) in the beginning, with just enough real sexual tension to allow us to root for it. Then, perhaps pressed for time, the mangaka suddenly rushes them to being “in love,” eliminating all their troubles and sending them off on a world adventure. None of the volume’s early tension is meaningful by the end, and even the characters’ title-inspiring bond over their love for the sky deteriorates into sentimentality of the most cloying kind.

Believable romance is incredibly difficult to write in a single volume, and many BL mangaka don’t even try. But while I might criticize those stories as being simply “not for me,” Sky Link actually would be, if only it succeeded, and that’s what I find so heartbreaking about it. I love a happy ending as much as the next romance-addict, but I prefer ambiguity (or even sadness) over unearned happiness any day. Ultimately, Sky Link is attractive but disappointing. – Review by Melinda Beasi 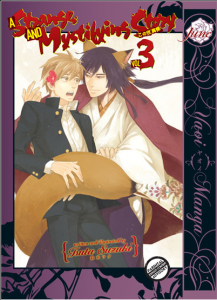 A Strange and Mystifying Story, Vol. 3 | By Tsuta Suzuki | Digital Manga Publishing/Juné | Rated Mature (18+) – The first two volumes of this series are the story of a sickly fellow named Akio who is cured of his illness thanks to the sexual healing provided by his family’s guardian beast, Setsu. These volumes are pretty good, but volume three beats them by a mile.

That’s because mangaka Tsuta Suzuki is wise enough to know when a story is played out and brave enough to risk angering her fans by taking things in an entirely new direction. Akio and Setsu appear but briefly, therefore, as Suzuki devotes the first half of this volume to the absolutely adorable love story between two of Akio’s coworkers and the second half to a teenager named Tsumugi who has just encountered a guardian beast of his own.

We’ve met Akio’s coworkers—cheerful middle-aged boss Keiichiro Minamiura and stoic twenty-something Tetsushi Hatoki—before, and there have been hints that something might be going on between them. The first chapter devoted to the pair reveals their history before Akio was hired, with Tetsushi being drawn in by Keiichiro’s personality (“Surely it’s a gift, such hearty, carefree laughter”) but unable to make a move because he is convinced he will be rejected, since others have pursued Keiichiro with no success. The second chapter seems to take place in the present. I loved both unstintingly and without restraint. Tetsushi may seem impassive, but he’s really straightforward with his emotions, and Suzuki adeptly captures the qualities that make Keiichiro simultaneously warm and enigmatic. I could seriously read about these guys forever.

The second half of the book pales in comparison somewhat, but is better than expected. Tsumugi Shirota—who, as it turns out, is Keiichiro’s former step-son—is one of those manga guys who excel at all manner of domestic tasks, especially cooking. On his 16th birthday, he finds out that he’s been assigned these chores as a means of training to become the “bride” for the family’s guardian fox-beast, Kurayori. Kurayori is displeased to find that his bride-to-be is male, but Tsumugi’s diligence wins him over and he decides to continue protecting the family until such time as Tsumugi is grown and can provide for them. It’s a little weird how accepting Tsumugi is of this arrangement (though I suppose that’s better than inflicting a lot of spastic flailing on readers), but I am overall intrigued and glad that this setup did not immediately lead to sexytimes.

As a final note, the volume’s mature rating is likely due to content in earlier volumes, because this one is markedly chaste. Suzuki writes in her afterward, “On a personal note, I am quite disappointed that I was not able to portray for you the panting of a middle-aged man.” Hee! – Review by Michelle Smith 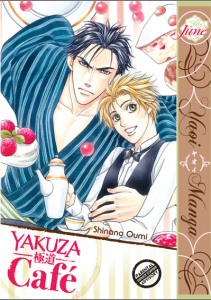 Yakuza Café | By Shinano Oumi | Digital Manga Publishing/Juné | Rated M (18+) – When Shinri Irie receives an invitation from his father, absent from his life for many years, to come live with him, he decides to accept. As it turns out, his dad (Daigo) is the former head of the Fujisaki clan, a yakuza group he disbanded in order to devote himself to being a better father. Many of his former devotees have been cast out, but a select crew remains to help the boss in his new venture: running a café.

The café’s décor is rather abysmal and their tea is even worse, so Shinri works together with the business manager, Zaouji, to whip the place into shape. Everything’s going smoothly on opening night until the disgruntled former clan members return with mayhem on their minds until they are quelled by the sight of Daigo’s phoenix tattoo. Really.

The romance angle comes in the form of Shinri’s relationship with Mikado, the leader of the henchman. He has reportedly loved Shinri for years and is dedicated to protecting him, but he has a weird quirk: whenever anyone touches the dragon tattoo on his back, he goes into savage mode—seriously, he has a line of dialogue translated as “rawr”—and, on one occasion, this leads to a nonconsensual encounter with Shinri. Not only is Shinri forgiving about this, he actually gets kind of wistful about it. “Even though it hurt and I was scared…. I didn’t hate it, either.”

The comedic element of a group of yakuza attempting to run a café is kind of fun, and I did like the scene where Shinri and Zaouji are dazzling some coeds with their looks and tea-making skills. But the business with the tattoos is just ridiculous, and Shinri’s acceptance of Mikado’s violent assault grates on my nerves. Worst of all, though, is the characters themselves. Mikado has almost zero personality. And if I told you to think of the most generic uke in the history of ukes, you’d probably come up with someone just like Shinri. I don’t believe in their relationship at all, but it’s not just them: a side story about Zaouji and his lover’s death has no impact at all because the characters are so flat.

If you want to read about yakuza and tea, I recommend Crimson Snow or I Give to You. There’s no need to read something this tepid. – Review by Michelle Smith