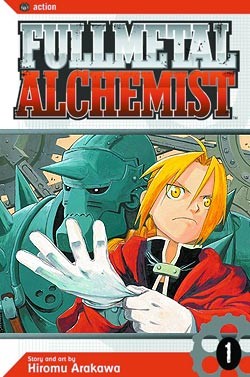 As Sean reported earlier this week, we’re coming up on the penultimate volume of, Fullmetal Alchemist. Though the series was a bit slow to grab me in its first couple of volumes, since then, it’s become one of my very favorite manga of all time, even making it on to my questionably accurate top ten.

Back in 2008, I started what I hoped would be a group adventure in FMA, the “Fullmetal Alchemist Read-a-Long,” originally posted in my LiveJournal, and eventually shared here as well. Interest was low at the time, and I bogged down after four volumes, but I still look back at them now and then.

With the series nearing its close here in the US, and Viz’s new 3-volume omnibuses hitting the streets, the time seems ripe for new readers to join in. And so, for this week’s Saturday Spotlight, I offer up my original Read-a-Longs for any of you out there just beginning the series: