September 15, 2011 by MJ and Michelle Smith Leave a Comment

MJ: *blinks* Oh. Hello Manga Bookshelf world. Wow. I’ve been far, far away from here for the past week. Michelle? Are you still here?

MICHELLE: Oh, sorry. I was just in the back room clearing out some cobwebs. It’s amazing how much time seems to pass between these weekly columns.

MICHELLE: It is. Shall I open the musty curtains of disuse and allow the sunshine of manga goodness to brighten our dingy surroundings?

MICHELLE: Alrighty, then! It’s going to be a Shonen Sunday week for me, as I take a look at the latest volumes of a pair of series published by VIZ under this imprint. 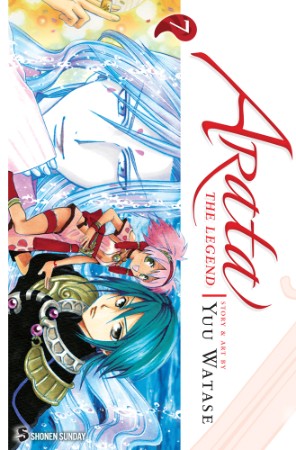 The first is volume seven of Yuu Watase’s Arata: The Legend and I’m just going to state right up front: as a fan of Watase’s Fushigi Yûgi: Genbu Kaiden and as a fan of shounen series by female creators, you really must read this series. (Conveniently, the first five volumes are available on VIZManga.com!) The general premise of Arata might sound like a typical modern-kid-in-a-fantasy-world adventure, but trust me, the execution makes all the difference.

In a world known as Amawakuni, Princess Kikuri has reigned for 60 years and has maintained control over the hayagami (gods in sword form) wielded by her twelve attendants (known as shinsho). On the day of a ceremony in which she is supposed to transfer power to a successor—played by a boy in drag named Arata for reasons one needn’t go into—she is cut down by one of these shinsho, but manages to hang on to a shred of life. Meanwhile, Arata is blamed and through various plotty means changes places with a modern high-school kid named Arata Hinohara, who is promptly chosen by a super special hayagami that will enable him to save the princess, in a nutshell.

Where the story gets really interesting is with all the complications Watase imposes upon this narrative. Hinohara was tormented by a bully in middle school, and can’t be the kind of sho that goes around making others submit to him, which in this case actually involves giving up one’s life to reside in another’s hayagami. He’s experienced that sort of forced domination, and can’t inflict it on anyone else. Instead, he convinces his opponents to entrust their souls to him, and has become the target of all of those who would stop him and take the throne for themselves. Meanwhile, he’s falling in love with the other Arata’s childhood friend and now his tormentor has arrived in Amawakuni, sending a powerful shinsho to Japan in his place who starts killing off his old classmates.

It might seem like there’s a lot going on in this series and, indeed, there is, but Watase just handles it so well it never feels overwhelming for a second. The world makes sense, characterization is consistent, and she employs a sure hand in dealing out story details on a need-to-know basis. In addition to his quest to save the princess, Hinohara is also battling his own emotional trauma and it’s this (plus the bevy of attractive fellas) that gives Arata something of a shoujo flair.

MJ: I’ve actually read the first two (maybe three?) volumes, and I agree it’s my kind of story! You’re making me feel very anxious to pick up the later volumes, though. For whatever reason, I really I do love shounen series written by women.

MICHELLE: One issue I had with the first few volumes was that Arata (the one now stuck in Japan) wasn’t given much of anything to do. Now that that’s been addressed, the series seems a bit… invigorated. The same can be said of my conviction to read Genbu Kaiden soon, durnit!

So, what had you been reading this week?

MJ: Well, I’ve been pretty well consumed with my day job over the past few days, so I haven’t read a lot. But I did find time to gobble down the latest volume of CLAMP’s xxxHolic, which was just released in (some) stores this week. I know you haven’t caught up on recent volumes, so I’ll try very hard to avoid spoiling you.

With volume seventeen, we’re now further into the portion of the series that was renamed xxxHolic Rō in Japan, following a major event in the story’s plotline. The ramifications of that event have really settled in, and this volume feels more solid than the previous because of it. It’s mesmerizing, really, to watch Watanuki, now so fully immersed in his new role. One of the things that struck me about this volume, too, is how much we’re learning about Yuuko, simply by watching Watanuki. She’s always been an enigma, and suddenly she’s someone we can truly understand. I really don’t want to spoil you, so I won’t explain further, but really, Michelle, it’s something to see.

This is my first taste of xxxHolic in quite some time, and I found I’d almost forgotten just how stunning the artwork is. I often talk about my love for Tokyo Babylon, and there are a lot of things that endear me to that series in particular. But one of its major draws for me is the artwork, and xxxHolic is the first of CLAMP’s series since then to affect me in the same way, visually. It’s all about the use of black. Now of course, Tokyo Babylon is more heavily toned, so the black isn’t necessarily as stark as it is in xxxHolic, which has such dark blacks and clean, deliberate line work it often looks like it could have been created with woodblock printing. Opening a volume of xxxHolic again was a visually spectacular experience, which I hope to be able to repeat soon.

Michelle, I hope you are able to catch up on this series soon, because I’m dying to be able to discuss it with you in more detail. I know there are people whose interest in xxxHolic waned early on, but I’ve only become more deeply involved as the series has progressed. I really can’t get enough of it.

MICHELLE: Now I feel guilty that I am restraining you from praising it to the extent that you desire! I will read it soon!

What you were saying about the artwork actually brought to mind another series that I’ve been reading lately, and that’s Sayonara, Zetsubou-sensei. These two series could not be more different, and yet they treat the color black in a very similar way, with sleek and stylized results.

MJ: Funny you should mention that series in particular, since Zetsubou-sensei’s character design has actually always reminded me of Watanuki!

MICHELLE: I can see that!

MJ: So, what’s your other Shonen Sunday pick this week? 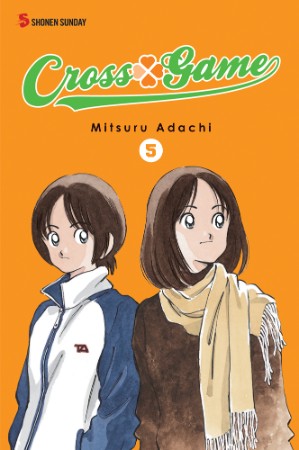 MICHELLE: My second Shonen Sunday pick is volume five of Mitsuru Adachi’s Cross Game, which I recently cited as my favorite series beginning with a C for David’s latest Favorites Alphabet column. In short, this is the story of a slackery boy named Ko Kitamura who is motivated to make the most of his baseball skills by the passing of a dear friend who dreamed that he’d make it to Koshien.

I’ve talked at some length about my ardent love of sports manga, and it’s true that I avidly devoured the regional tournament match between Ko’s team and their heavily favored opponents. Adachi doesn’t just depict the action of the game, but recreates the whole experience. The crowd, the clouds, the passageways underneath the stadium that finally emerge behind a row of sunlit seats… It’s about as lovely as a baseball game can ever get, reinforced by a story that prizes sheer love of the game over pride and ego.

But there’s more to Cross Game than baseball. Even though she doesn’t survive beyond the first volume, Ko’s childhood friend Wakaba continues to make her presence felt in this volume, which comprises volumes ten and eleven of the original release. Several of Ko’s teammates are united in their goal because they want to fulfill Wakaba’s dream, and this similar feeling of unity in the face of loss is reinforced when a new girl with an uncanny resemblance to Wakaba moves into the neighborhood. The stunned reactions are conveyed poignantly, and even though Ko has been steadily growing close to Wakaba’s prickly younger sister, Aoba, it makes perfect sense why the presence of this new girl might generate some confusion.

MJ: As you know, I’ve gotten as far as actually buying the first volume with Viz’s digital app, and every time you and David talk about the series, I think about just how much I need to sit down and read it. Maybe this time I finally will. You make a compelling argument, as always.

MICHELLE: It’s really very very good. And you know I don’t say that lightly. Another great thing about it is that you’re getting at least two volumes at once. It’s hard to believe we’re already over halfway through with the series! I don’t have a clue how well it sells but I am really hoping that VIZ decides to release more Adachi in similar fashion.

Oh, this week has done me in, Michelle. Can I go to sleep now?

MICHELLE: Sure you can! But don’t forget to brush your teefs.