It’s Manga Moveable Feast time once again, which so often inspires me to think about 3 things. This week, I have with me a special guest for 3 Things Thursday, Soliloquy in Blue‘s Michelle Smith, who, like me, is a big fan of this month’s MMF topic, Natsuki Takaya’s shoujo epic Fruits Basket.

We’ve already talked at length about the series as a whole, but one thing we’d like to linger on just a little bit longer is some discussion of our very favorite characters in the series. Fruits Basket is a treasure trove of complex, deeply moving characters, each of which could easily inspire hours of discussion. We don’t have hours, but we do have some favorites, and this seemed like the ideal time to share them. We’ve each picked three, so let’s start with Michelle’s! (Click images to enlarge.)

1. Yuki Sohma – My love for Yuki springs largely from a sense of pride in how much he blossoms over the course of the series. As he recounts the story of his childhood to Manabe, Yuki says, “There was something I wanted… loving parents… a home that no one would ever want to leave. A happy home. A warm place… with everyone smiling at me.” But Yuki was denied this. His parents valued him not for himself, but as a tool to gain favor within the Sohma family. Family members revered and reviled him just because of his status as the rat, something he had no control over. Even when he left the main house to live with Shigure and attend high school, the other students saw him not for himself, but as a princely figure.

Only Tohru saw and accepted the real Yuki. And once he found that with her, once he had that warm and happy home, he was finally able to move beyond the past and begin figuring out what kind of person he wanted to be in the future. One of my favorite Yuki moments occurs directly on the heels of his conversation with Manabe, where Yuki articulates his desire to give support to someone in the future, not just receive it. 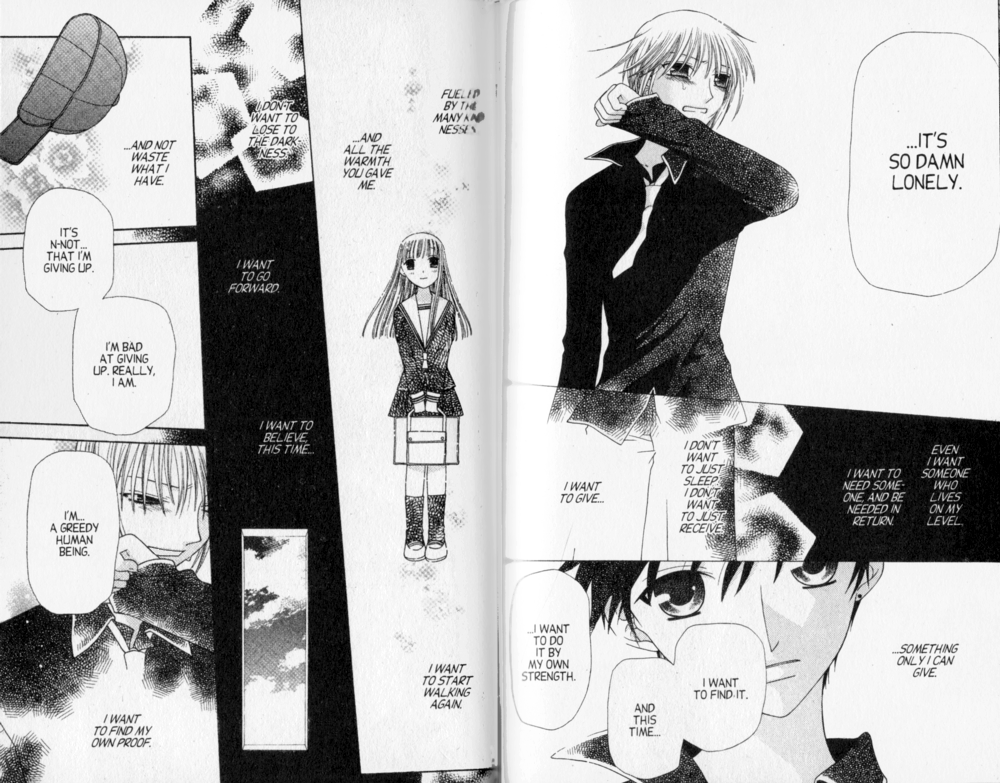 2. Ayame Sohma – As a teenager, Ayame was self-absorbed and didn’t realize, until Hatori pointed it out to him, that the things he said and did could actually hurt other people. One of those he hurt was Yuki, who had reached out to him as someone he might be able to tell about his unhappy life as Akito’s companion. Ayame failed him then, but now regrets that deeply and tries his best to form a relationship with the little brother whom he once ignored. Sure, he’s kooky and outlandish, but he’s also absolutely sincere in his love for Yuki, and little by little wins his confidence.

My favorite Ayame moment occurs in volume thirteen, when he interrupts the parent-teacher conference Yuki and his mother are attending, deflects all of their mother’s hostility onto himself, and helps Yuki find the courage to tell her that he will be the one deciding his own fate. I also love that Ayame immediately texts Hatori to let him know Yuki said he is reliable. 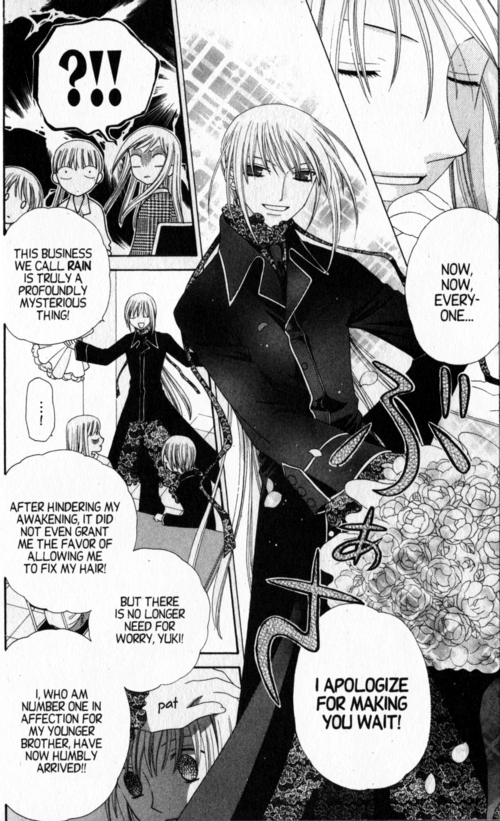 3. Hatori Sohma – Hatori, the quietly suffering woobie. How I love him. There are no shortage of sad characters with painful backgrounds in Fruits Basket, but the first such story we learn about in detail involves Hatori and Kana, a special, optimistic woman who loved Hatori and accepted him, curse and all. What she couldn’t accept was the guilt after Akito reacted violently to their relationship and severely wounded Hatori, putting him in the dreadful position of eventually wiping all of her memories of their time together in order to ease her suffering. Because this revelation occurs so early in the series, everything Hatori does from that point on is tinged with sadness as we know what he’s gone through. He’s also the only one who can reign in Ayame’s enthusiasm or dare to talk with Shigure about his schemes.

So, while I wouldn’t exactly call this my favorite Hatori memory, it’s certainly an indelible one. 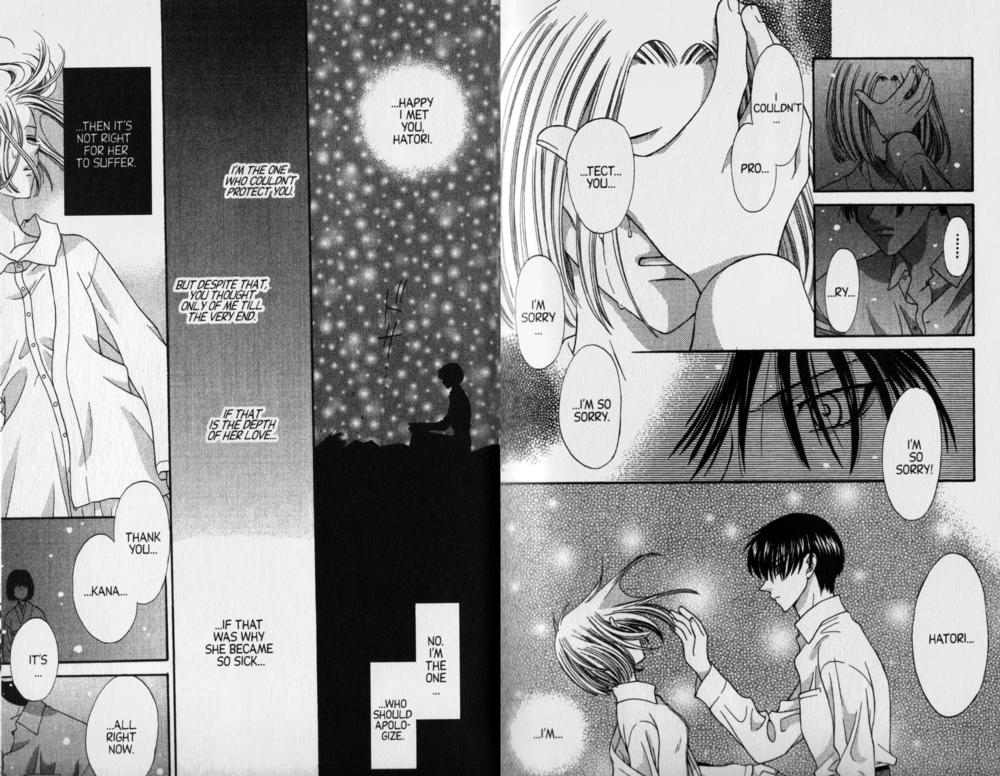 1. & 2. Arisa Uotani & Saki Hanajima – Like David, I’m a sucker for great female friendships, and no friends could be greater than Fruits Basket‘s Uotani and Hanajima. Though they are each fantastic characters in their own right, nothing beats them as a team, looking after (and being looked after by) their dearest treasure in the world, Tohru Honda. They’re happiest as a trio, of course, but fiercest as a deadly duo that doesn’t take crap from anyone. Not that Takaya limits them to a life of badassery, mind you. They’re also just as kind, broken, and unexpectedly vulnerable as anyone else in the series, and that’s saying quite a bit. I would happily read an entire series chronicling the lives of Uotani and Hanajima, their adventures, loves, and triumphs as young adults and beyond. They’re just that awesome.

Still, I admit I love them best when they’re kicking ass. Don’t you? 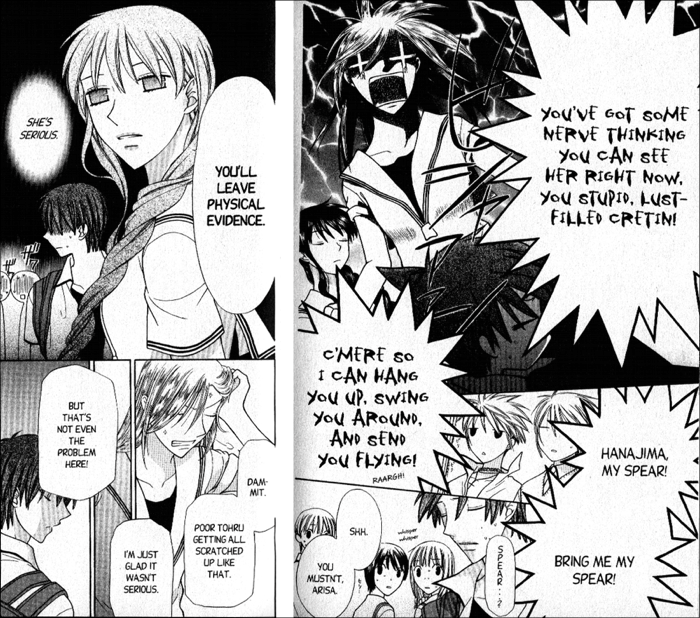 3. Momiji Sohma – And should one require more evidence that David and I share a brain, my third favorite character in the series—and my very favorite Sohma—is little rabbit Momiji. We meet Momiji as a hoppity, cheerful boy, but it isn’t long before we learn that he’s one tough kid. Having watched his own mother beg to have her memories of him erased, he lives as a stranger from her, keeping a brotherly eye on his little sister from afar, whom he hopes he might one day be allowed to spend time with. He’s also the first person to put himself between Akito and Tohru—a favor Tohru returns in kind.

Though Momiji is at his best when he’s happy (and awesomely brave when he’s being rebellious), one of my very favorite Momiji moments is this scene from volume eleven. After standing up to Akito, against the grain of their supernatural bond, and watching Tohru, in turn, stand up for him, he finds himself suddenly overcome by being just a kid, unable to hold back his tears. It’s a rare glimpse at the most vulnerable side of Momiji, and I dare you not to tear up when reading it in context. 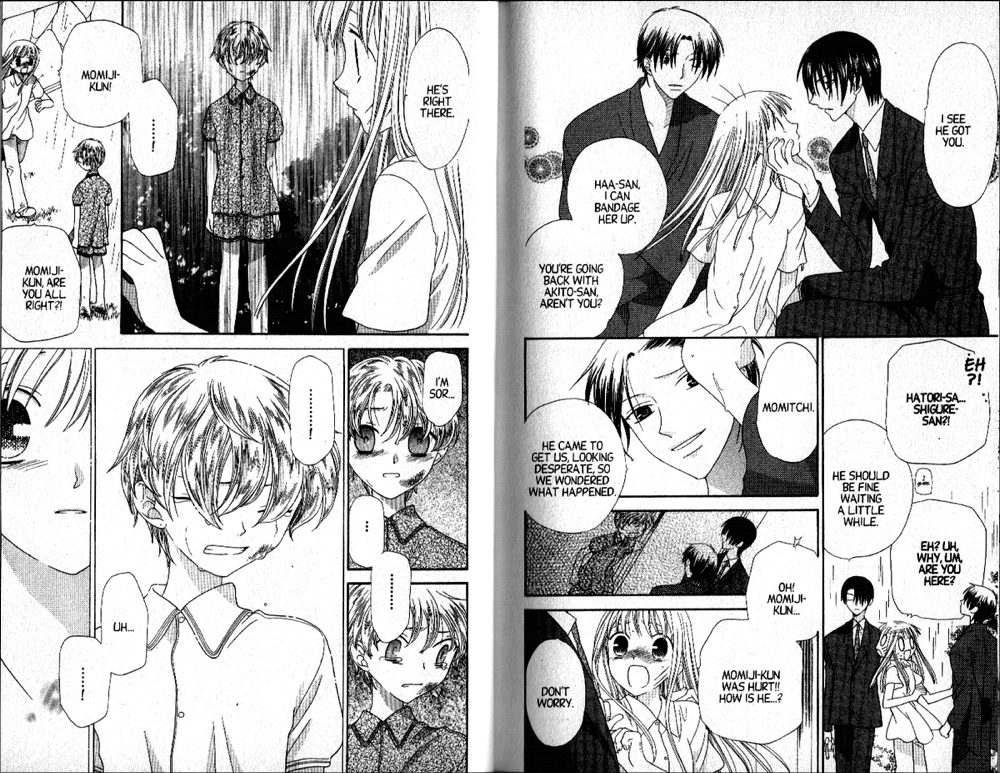 Readers, which three characters from Fruits Basket do you love best? Let us know in comments!