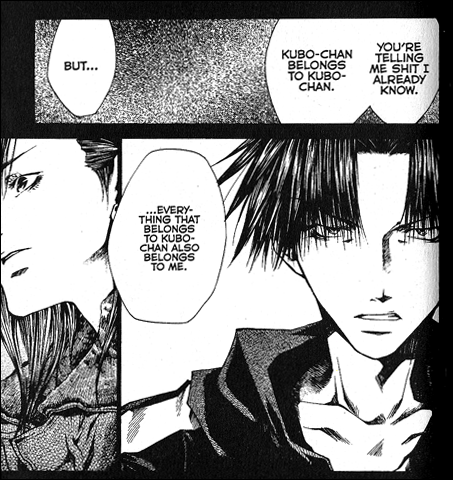 One of my favorite quotes so far from this month’s Manga Moveable Feast comes from David Welsh, as he describes why Wild Adapter is, in his words, “bathtub manga.” “Well,” he says, “it’s partly because, empirically good and ambitious as Wild Adapter is, it doesn’t wear its quality on its sleeve. It gives you the opportunity to believe that you’re indulging in a guilty pleasure, even though you’re actually seeing a spectacular piece of craftsmanship.”

David has a habit of writing brilliant things I wish I’d come up with myself, and this observation definitely belongs in that category. He’s absolutely right. One of the things that makes Wild Adapter so enjoyable to read is that it creates a sense of decadent self-indulgence while actually delivering Damn Good Comics. As a result, the experience is completely satisfying, even after the initial glow of frivolity has passed.

With this in mind, I give you this week’s 3 Things…

3 guilty pleasures in Wild Adapter that aren’t so “guilty” after all:

1. Cracktastic plotting. An emotionally detached youth is drawn into the yakuza, only to become unintentionally involved with a mysterious drug that turns its users into mad, hairy beasts, ultimately leading him to adopt a part-man, part-beast to whom he becomes deeply (but ambiguously) attached. Later, the two of them accidentally fight crime. Sounds crazy, doesn’t it? And yeah, it totally is. Thing is, all the craziness is so firmly rooted in emotional truth that it somehow actually works. What should be completely unbelievable becomes fantastically believable, leaving readers free to ride high on the adrenaline created by its outrageous, violent adventure, without worrying about a painful crash later on. Minekura writes crazy, but she’s solid to the core, and so is Wild Adapter.

2. Stunning sensuality. Despite this series’ fairly minimal sexual content, it is one seriously sexy manga. I mean, really, really sexy, and that’s not a characteristic I’d attribute to many series, including those that contain a lot of nudity and/or sex. Most deliberately sexy manga are hardly sexy at all, at least in my experience. Of course, what’s sexy about Wild Adapter isn’t actually the sex at all, most of which amounts to small-time crooks getting it on with women they had to pay, or skeevy yakuza bosses coercing their underlings into special service. None of that is what makes this series so sexy, and that’s part why its sensuality maintains itself so well. Minekura creates her manga’s super-sexy aura with superb characterization and an incredible sense of style, without having to rely on less reliable elements like revealing clothing or heavy bedroom action.

3. Boys’ love. Good romance is incredibly difficult to write (with or without explicit sex involved), and though there is plenty of good romance available in the English-language BL market, it’s also full to overflowing with examples of all the ways in which romantic fiction can fail. As a result, it’s a genre that gets little respect among critics, even those who recognize the the real worth of romantic fiction. It’s telling, I think, that TOKYOPOP chose to release Wild Adapter as part of their mainstream line of manga, rather than on their BL imprint, BLU. On one hand, this decision makes good business sense and reflects Wild Adapter‘s wide appeal. On the other, it clearly demonstrates that while TOKYOPOP may have believed that non-BL fans might buy Wild Adapter, they did not for a moment believe that they would buy it with a BL label.

In yesterday’s roundtable, Michelle, David, and I spent some time discussing the ways in which Wild Adapter does and does not conform to common BL tropes. And while it’s true that the series lacks many of the elements that frequently characterize “BL,” what it doesn’t lack is actually the thing I read BL for in the first place, and that would be love between boys. Though Wild Adapter does not contain the worst of the BL genre, it does contain the best, and both Minekura and the genre deserve credit for that. So while I am certainly adamant that non-fans of BL should give Wild Adapter a try, that’s not because the story isn’t BL. They should read it because it’s really good BL, and people should know what that looks like.

Readers, got any “guilty pleasures” that really aren’t guilty at all?