MELINDA: We come before you today to introduce the subject of this month’s Manga Moveable Feast, Kazuya Minekura’s Wild Adapter.

MICHELLE: It’s rather hard to describe Wild Adapter in a succint manner, so I think I am just going to quote myself, from my 2009 review of the series:

“On its surface, Wild Adapter is the story of Makoto Kubota, a former leader of a yakuza youth gang who is looking into a string of gruesome deaths, victims transformed into beasts by overdosing on a drug known as Wild Adapter. He takes in a “stray cat,” Minoru Tokito, with no memory of his past and a bestial right hand that indicates he’s had at least some exposure to the drug. Together, they attempt to unravel the mystery while Tokito strives to regain his memories and rival yakuza groups pursue Kubota for various reasons. Delving deeper, Wild Adapter is about two broken men who care for each other deeply but are so damaged that their affection manifests in unusual ways.”

Each volume can stand alone, as Kubota and Tokito, for example, infiltrate a cult with possible connections to Wild Adapter (volume three) or undergo questioning as a person of interest in a murder investigation (volume four). One unique trait of the series is that, in each volume, a new supporting character is introduced through whose eyes we see the lead characters. This results in all manner of interesting observations regarding them and their relationship. Kubota generally comes off as mysterious and untouchable and Tokito as brash yet honest, but only the more astute observers recognize how deeply the aloof Kubota, who has never cared for much of anything before, cares about and relies on Tokito. It’s pretty fascinating. 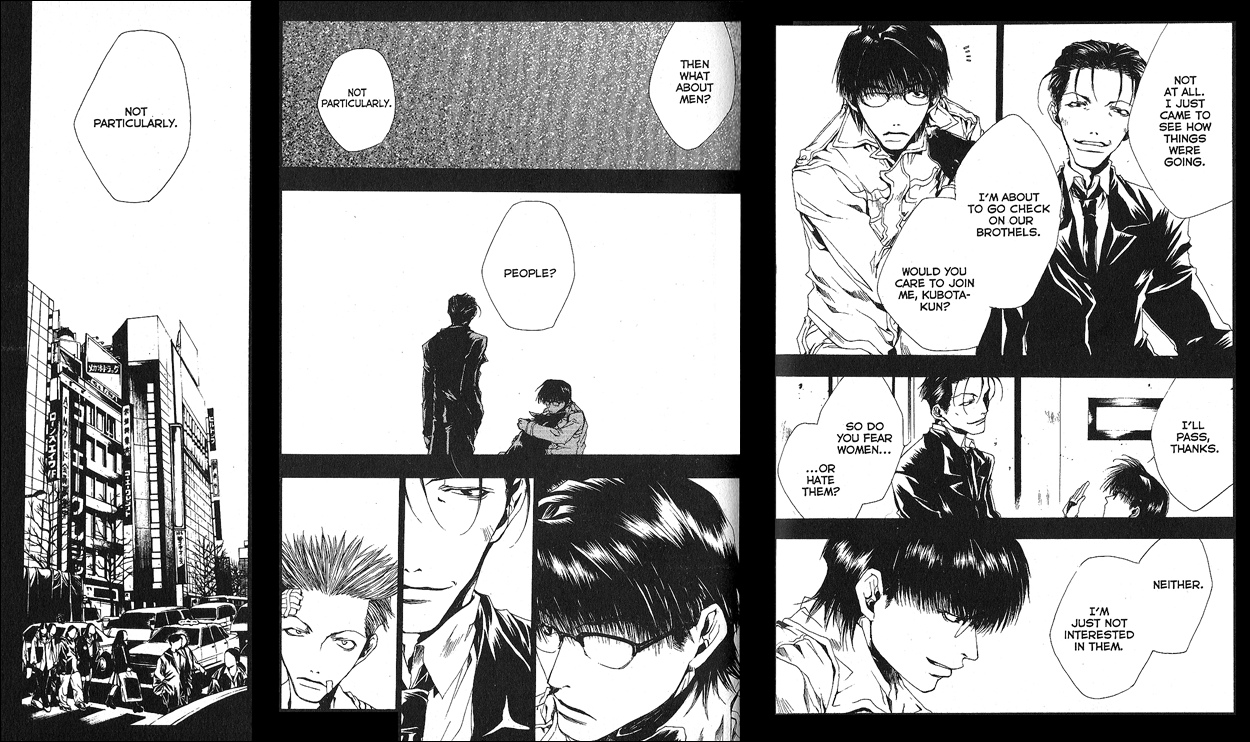 MELINDA: Wild Adapter has been serialized in Tokuma Shoten’s Chara since 2001, with six tankobon releases to date, all of which were published in English by TOKYOPOP (the last in November of 2008). The series has been on hiatus since 2009, leaving five chapters hanging without tankobon release or official translation. Given the author’s other obligations and many health problems it is unclear when or if it will be continued.

Minekura is best known for her series Saiyuki and its many offspring, originally published in Square Enix’s pretty, pretty shounen magazine, G-Fantasy and later moving onto the more overtly female-aimed pages of Ichijinsha’s Comic Zero-Sum, a progression that highlights one of the elements that makes Wild Adapter so appealing. With her talent for fantasy-adventure, Minekura prefers to explore the relationships between her male characters in the thick of battle rather than in the bedroom, even in a boys’ love series like Wild Adapter. She also prefers sly innuendo over explicit romance, which forces her to create intimacy in other ways, something I find particularly refreshing in a BL series. Like Akimi Yoshida’s Banana Fish, Minekura’s non-romance feels more intimate than many outright love stories. Unlike Yoshida, Minekura also has an unbeatable sense of style and a wicked sense of humor about the genre that’s difficult to resist. 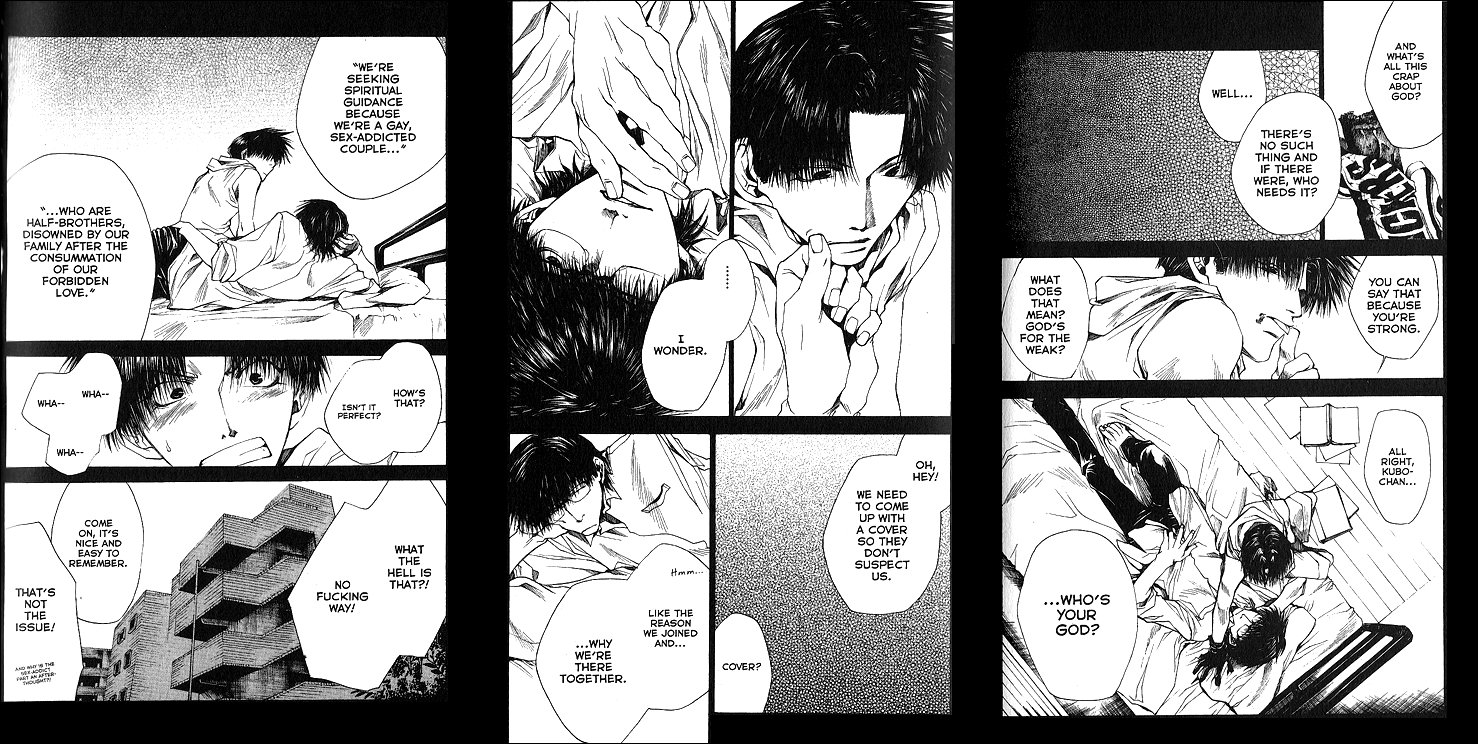 MICHELLE: The fifth volume of the series is my favorite, because it combines all of the elements Melinda just mentioned into a touching whole. This volume backtracks to fill in the missing year between volumes one and two and depicts the early days of Tokito and Kubota’s acquaintance, as seen through the eyes of their lonely elementary-school neighbor, Shouta. There’s action, as Kubota is pursued by yakuza toughs, and there’s humor, particularly in the form of the shounen-style manga Shouta is drawing about his neighbors, but the most affecting part of the story is the wary way in which Kubota and Tokito gradually get closer, as caring for someone else this much is new territory for both of them. 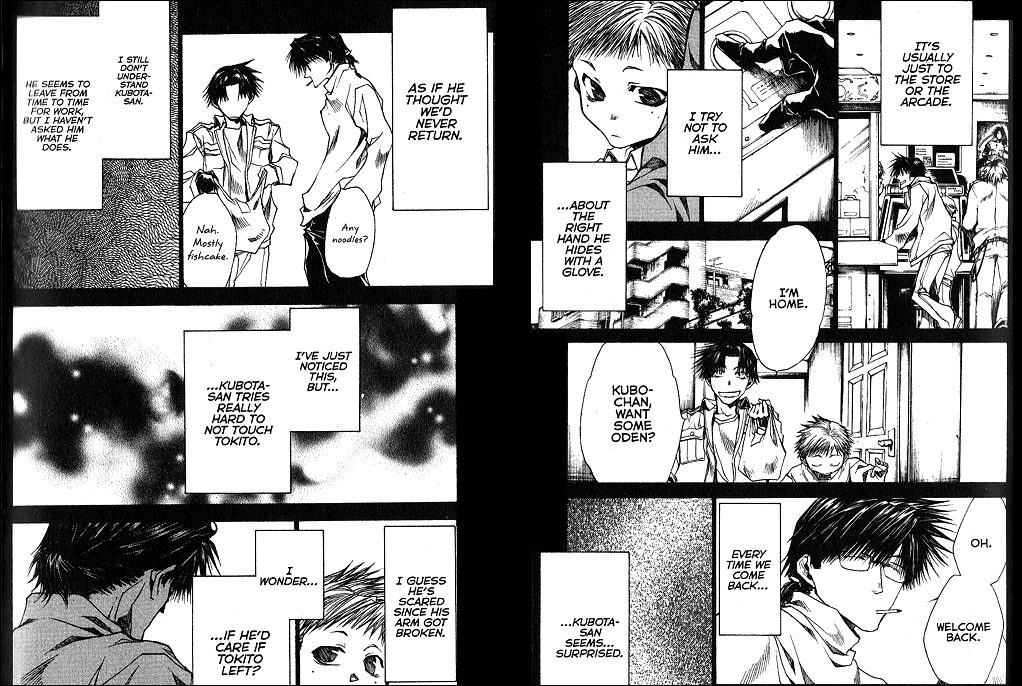 MELINDA: But why just take our word for it? Here are a few thoughts from other reviewers online:

“The third volume of Wild Adapter offers everything I loved about the first two: improbably sexy characters posing through mostly outlandish scenarios, all of which manage to be unexpectedly involving beyond their considerable surface sheen. From time to time, it’s also hysterically, intentionally funny. There’s a bit in the third volume that I don’t want to spoil, but it made me laugh out loud. It combines everything that I love about the book: deft plotting, high style, and Minekura’s standing as one of manga’s premiere teases.”
– David Welsh, The Manga Curmudgeon

“At risk of sounding like a repeat of my review of volume five, Wild Adapter continues to keep me completely hooked with its fast paced action, potent character drama and wickedly dark tone. My only disappointment is how short each volume feels by the time I’m done. As usual I’m looking forward to the next one with great anticipation and hope the series continues to maintain its grittily-charged charm.”
– Lissa Pattillo, Kuriousity

“Let’s not mince words. You’ve got a story about drugs and the mafia, so the M for Mature rating on the back cover should come as no surprise to you. There’s also a bit of boy love going on during several pages, so if that’s not your cup of tea, you might also consider passing on this series. Those who stick around, though, are in for a very well written series that definitely creates a dark and gritty tone…perfect for this kind of story. There’s a lot of roughness to the book, both in terms of artistic style and panel placement, which keeps things just a bit off center, never allowing the reader to feel truly balanced. Accidental or intentional, it complements this book nicely.”
– A. E. Sparrow, IGN

“I think this series is considered by many to be Kazuya Minekura’s strongest work, and it’s not hard to see why. The pacing and story construction of Wild Adapter are deliberate, artistic, and effective. The entire first volume works as a sort of prologue with a definite beginning, middle, and end, and the second lead doesn’t appear until the very end of said volume; it’s simultaneously self-contained and an excellent starting point for a broader premise. I like Volume 2 even more. Wild Adapter has its fair share of homosexual themes, but with the exception of a silly yazuka kiss, they’re handled with surprising care and subtlety–a far cry from the ridiculous nature of most Boy’s Love stories.”
– Lianne Sentar, Sleep is For the Weak

MICHELLE: Please join us throughout the week as we highlight more coverage of this remarkable series. Participation is highly encouraged (see this post for details) but not mandatory.

But, seriously, you really should read it.

MELINDA: We’ll be posting special Wild Adapter-themed features here from Wednesday through Saturday, and of course we’ll be collecting links to your contributions! All links will be archived on this page. Please remember to e-mail or message one of us with links to your posts. And if you happen to be blogless, we’ll be happy to post on your behalf! 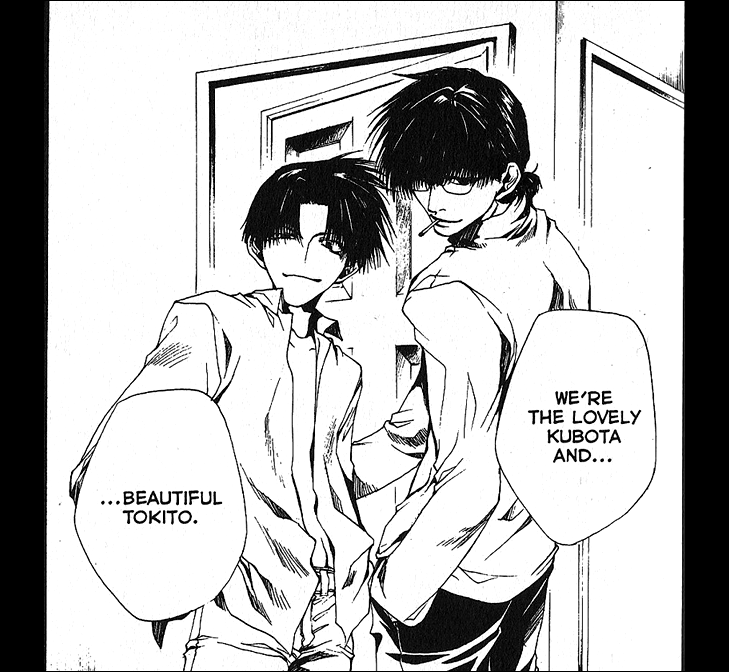