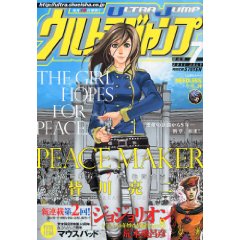 This article was originally published at Mangacast.net.

As sure as boys become men, some boys who read manga become men who read manga. And, at some point, battles for ninja clan supremacy fail to fully meet the emotional needs of that audience. No, that audience wants more violence, less focus on teamwork and strangely uncomfortable series that resolve without ending or end without resolving. For these readers, Ultra Jump is the magazine of choice.

Running 16 series currently, Ultra Jump is heavy on the sci-fi/fantasy and action, with some martial arts and a soupçon of magic. Ultra Jump got it’s start in 1999, some 30 years after it’s younger brother Shounen Jump. UJ is a monthly magazine, retailing in Japan for ￥560 ($6.65USD at time of writing) for just over 500 pages and like Shounen Jump, it’s available pretty much anywhere manga magazines are sold in Japan and in most Japanese bookstores in America. The 2010 circulation for Ultra Jump is reported to be 73,20 which is slightly up from 2009’s 70,834 and close to the 2008 circulation.  Ultra Jump has a digital magazine called Ultra Jump Egg, which provides sample chapters of manga series that have just begun to run in the magazine or, are perhaps being considered for it.

Of the series running currently in Ultra Jump, several have had a checkered experience on US shores. Infamously, Tenjou Tenge, which recently finished, was originally licensed by CMX, who had the nerve to deprive the readership of a glimpse of girl’s underwear and was therefore censured strongly by the folks least likely to actually buy the thing anyway. Viz has rescued this audience from that hell of not being able to see girl’s underwear, and new omnibus volumes are starting to hit the shelves.  Hayate x Blade (the actual reason that I get Ultra Jump) has been licensed and published through volume 6 by Seven Seas. Because Sevens Seas licensed the title from the original publisher, Mediaworks (who ran it in Dengeki Daioh magazine through Volume 8, when it moved to Shuiesha and Ultra Jump,) there is some confusion among fans whether Seven Seas will be able to continue it at least through that point or whether Volume 6 will be as far as the series makes it in English.

Because Ultra Jump is a Shueisha book, it’s no surprise that Viz has a strong presence in the UJ license game. Hyperviolent dystopian Gumn, known here as Battle Angel Alita, has undergone only slightly fewer iterations on these shores as it has in Japan and has managed to successfully reach Volume 14 of the Final Order series. Volume 15 is slated to be released in autumn 2011 Bastard!!, which made it to Volume 19 in English, is known for going on hiatus with some regularity (and has reached that stage of “venerable old series, which means it is serialized on the order of twice a year, perhaps.) Bastard!! is now on hiatus in English, as well. Also currently published by Viz is the hyperviolent dystopian Dogs, Bullets and Carnage.

Ultra Jump series have a tendency to be very long-running as manga series, (Ninku, Tenjou Tenge, Gunm, Steel Ball Run) but if they are turned into an anime at all, the anime tend to be OVAs or short series without second seasons. The overwhelming feeling as a reader is that this is a magazine for readers of manga, as opposed to anime/manga fans. And not just readers, but readers who are in for the long haul, who are content to see the plot develop through long fight arcs and the small spaces in between them. Of the remaining unlicensed titles, I can see Jumbor being ported here, fueled by any success with Takei Hiroyuki’s collaboration with Stan Lee, Ultimo – Jumbor has very similar character designs, but a slightly more classic sci-fi feel. And I wonder if America would be ready for a Wild West manga like Minagawa Ryouji’s Peace Maker. Viz is still slowly popping out Jojo’s Bizarre Adventure, so there’s at least a chance that, when that finishes, Steel Ball Run, a hyperviolent dystopian tale of the meanest polo game you ever did see, might make it over here. That, or when they hit the lottery and want to throw some of that money away on something people want, but will never buy.

The hyperviolent dystopian magical series Anima Chal Lives (one of my personal faves in the magazine), Grandeek Reel, Heaven’s Prison and Hatsukoi Magical Blitz all have about the same chance of being licensed as Needless, which is to say little, for any number of reasons, from constant, uneditable nudity, to constant, uneditable semi-nudity. (The Needless anime was licensed, I’m still not sure why. never was there a better-named series.)

I’ve seen UJ alternately labeled shounen (for boys, say 12-15) and seinen (for young men, say 16-25.) I’d weigh in on the side of seinen. It’s not that young boys can’t or won’t read and stick with long series – One Piece proves the lie on that pretty quickly – but that the sensibility of the stories, and the crises of identities are more “adult,” if you will. When I began this article, I was surprised, pleasantly, at how many of the series for this magazine have made it over here.  Viz has already resurrected Tenjou Tenge and, damn I’d love to hear that Hayate x Blade will be continued.