Welcome to the March installment of BL Bookrack, a monthly feature co-written with Soliloquy in Blue‘s Michelle Smith.

This month, we take a look at four offerings from Digital Manga Publishing’s Juné imprint, Honey Chocolate Pancakes, Intense Rain, My Bad!, and Then Comes Love. 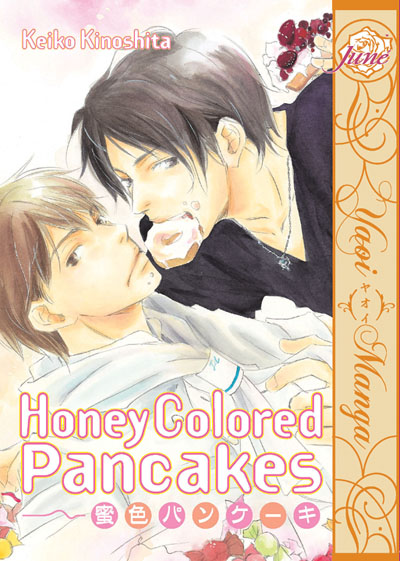 Honey Chocolate Pancakes | By Keiko Kinoshita | Published by Juné | Rated Mature (18+) | Buy at Akadot – The two-part title story in this collection by Keiko Kinoshita (Kiss Blue) is alone worth the price of admission. When famous actor Tougo Kijima takes a sudden sabbatical from his job and claims to be unemployed and homeless, he’s taken in by pasty chef Chiharu Abe, whose creations Tougo adores. They soon begin fooling around, with prickly Chiharu gradually lowering his defenses towards his uncouth houseguest.

Of course, when he finds out Tougo’s secret and realizes he’s been lied to, Chiharu feels like a fool. Tougo claims that it wasn’t his intention to trick Chiharu, but the damage has been done. Kinoshita handles this scene extremely well, especially in the way she allows silence to hang between them when there’s nothing more to be said. The second part of their story is a little less polished, since we don’t learn exactly why Chiharu allows Tougo back into his life, only that he does and that Tougo is a pretty jealous guy.

Subsequent stories are less successful. The best of the remainder is “For Love,” in which a businessman named Miyasaka, who has nurtured an unrequited love for his friend Minami for ten years, believes the time has come to wish Minami happiness as he embarks on a relationship with a woman. Miyasaka’s pain and Minami’s confusion are nicely conveyed, though the abrupt ending is somewhat of a disappointment.

Neither of the other stories in the collection impressed me much. “Tomorrow Will Be Rosy” is about the efforts of a teenaged couple to consummate their relationship while “A Clever Man at Work” features a very manipulative character who purposefully acts incompetent on the job in order to frustrate his mentor into making cute expressions. He also lies about his background to elicit sympathy and is just overall very unappealing.

In the end, it’s a fairly uneven collection, but not a bad read by any means. 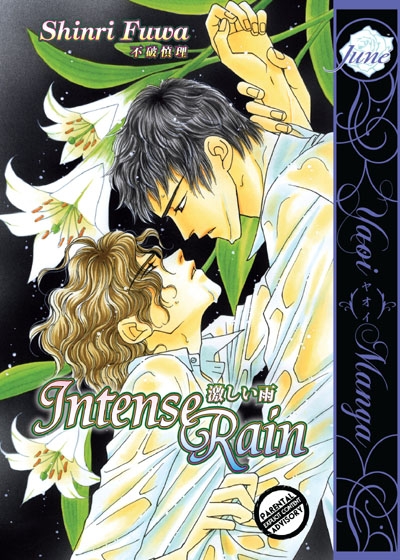 Intense Rain | By Shinri Fuwa | Published by Juné | Rated Mature (18+) | Buy at Akadot – It’s been five years since smooth operator Takaaki lost his college boyfriend, Ryuji, as a consequence of his own chronic infidelity. But when Ryuji turns up as a substitute at the high school where Takaaki teaches, old feelings rush back on both sides. Though Ryuji resists falling back into a relationship that was once so painful, confusing signals from Takaaki beg the question, can people really change?

If there’s one thing about this manga that deserves high praise, it would be the cover. The book’s cover image describes and contextualizes its contents more accurately than any review ever could. The tall, masculine aggressor, his tiny, disheveled prey, the melodramatic pose struck between their rain-soaked bodies, framed by flowers and dark desire–all these things together provide a pretty succinct overview of Shinri Fuwa’s Intense Rain. Perhaps the only the book’s inner cover could go one better.

If this sounds a bit snide, well, maybe it is, but there’s an element of reluctant praise that I simply can’t deny. For a book to be so forthright about what it hopes to accomplish (and so utterly successful in accomplishing it!) is something rare indeed. Intense Rain is, in execution, exactly as advertised, no more, no less. And if I might have hoped for more, can I really complain?

From the very beginning, Intense Rain exemplifies BL in its most surface terms. Seme Takaaki is dark, mysterious, vaguely brutal, and a predator of men and women alike. Uke Ryuji is delicate, emotionally frazzled, perpetually blushing, and helpless in his man’s arms. As maddening as these baseline characterizations may be, however, it’s the characters’ “growth” that is the story’s primary weakness. Takaaki’s transformation from classic rake to caring lover is left too much offscreen to be believed, while Ryuji’s acceptance of his lover’s sudden reformation is enough to send one’s book flying across the room. A secondary story involving the romance between a 30-something salaryman and a high school student fares a little bit better, though it is no less shackled by standard BL tropes.

What Intense Rain does offer is a strong dose of romantic melodrama and some pretty, pretty pictures, for those who have the craving. Then again, you could just stick with the cover. 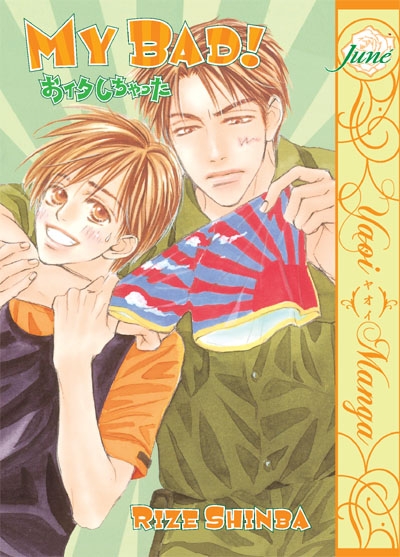 My Bad! | By Rize Shinba | Published by Juné | Rated YA (16+) | Buy at Akadot – I’m generally not one for BL comedies, much less those that center on underwear thievery, so I initially did not think I’d be reading My Bad!. That changed after I checked out Intriguing Secrets, another title by the same creator which was favorably reviewed by Melinda in a Bookrack of yore. I liked it very much, which prompted me to give My Bad! a shot.

In “Lovely Beast,” for example, it’s teenage Hiroki who is obsessed by Izumi, a tenant in the building Hiroki’s grandparents oversee. He goes so far as to let himself into Izumi’s place and make off with a pair of his boxers. Smutty discovery ensues. “Won’t You Be My Wife?” and “Miracle Voice,” in turn feature younger men falling in love with a housekeeper and the guy who makes the announcements on the subway, respectively.

My favorite in this line is “Stamp Please!” in which a huge, genial postal worker named Yuji Kikkawa delivers a letter to Ayato Mashiba. Ayato is instantly smitten, and sends a letter to himself just so he can see Kikkawa again. Throughout the story, he puts himself in Kikkawa’s path while simultaneously avoiding the desperate pleas of a stalkery ex-lover. The plot takes a dark turn, but I ended up liking it a lot. Shinba writes in her notes that she regards this as a serious story, even though others perceived it as comedy, and I quite agree.

Where some of the stories fail is in making the reciprocation scenes believable. I’m not sure if blame should be laid at the feet of the short-story format or if Shinba just couldn’t communicate the characters’ true emotions clearly, but there are a few stories in which I found the happy moment extremely abrupt. Probably the biggest culprit here is “Won’t You Be My Wife?” where a surly character is suddenly revealed to care about his housekeeper far more than was ever previously suggested.

On the whole, I enjoyed the collection and feel pretty certain now that I’ll like anything Shinba produces. 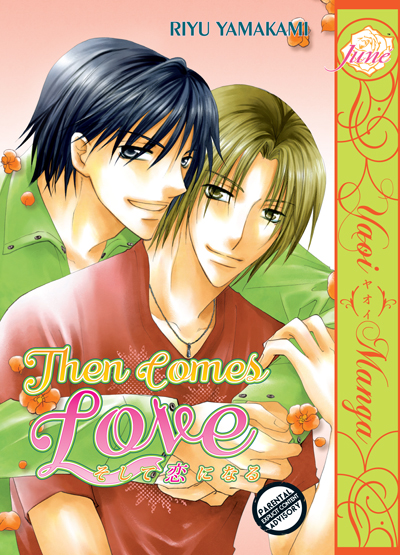 Then Comes Love | By Riyu Yamakami | Published by Juné | Rated Mature (18+) | Buy at Akadot – When happy-go-lucky college student Takahiro approaches aloof loner Midori to try to gain an introduction for a smitten female friend, it’s surprising to both of them that this would eventually lead to close friendship. But things get complicated fast when an encounter with another student forces Midori to admit to himself and his friend that he’s gay. Though Takahiro claims not to be bothered by this new information, he’s also clearly angry about Midori’s new relationship, calling his own feelings for Midori into question.

While this type of love triangle is a pretty standard setup in the “best friends turned lovers” BL sub-genre, Riyu Yamakami makes better use of it than most. Though there’s never any question about where the story’s primary relationship is headed, its journey is surprisingly believable and comparatively un-rushed. Even the characters’ “popular guy” and “aloof guy” stereotypes work in the story’s favor here, allowing Yamakami to thoroughly explore the way two contrasting personalities process all the various difficulties and emotions common to falling in love.

Yamakimi’s only real misstep is in her use of the love triangle’s third party, a smooth talker named Soejima who alternates between promiscuous playboy and sneaky matchmaker. Though technically no less a BL cliché than the story’s two leads, Soejima unfortunately crosses over into uglier real-life stereotypes, spouting lines like, “Gay men are always looking for the chance to have sex with tons of other guys,” as he works on seducing a desperate Takahiro during the book’s single descent into truly absurd fantasy.

Yakamimi’s artwork, though awkward in some of the characters’ more physical encounters, is generally a highlight, providing much of the contrast and emotional nuance that make her characters so compelling.

Though not without its minor stumbles, Then Comes Love is a genuinely refreshing addition to Juné’s BL one-shot catalogue.