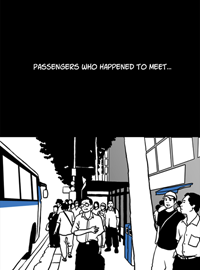 It’s a slow week again in the English-language manhwa blogosphere, though we do have one fun tidbit to share.

Over at the iSeeToon blog, company representative Kim Jin Sung teases us with a webtoon trailer for one of their upcoming iOS releases, Ill-Fated Relationship, due to be available in English sometime this year. I’ve actually had a little peek at this series, and it looks to be quite interesting, so let’s hope we won’t have too long to wait!

On a personal note, with the understanding that many of South Korea’s most innovative comics are happening online rather than traditional print, I very much wish that more companies were finding ways to bring those comics to us. I do appreciate the efforts of both iSeeToon and NETCOMICS, but I must admit I am feeling quite impatient for more. I can’t help dreaming of an online portal such as Naver (as described by Hana Lee in her introduction to Korean webcomics) in English, though I expect this is a bit of a pipe dream.

This week in reviews, King of the Zombies reviews the manhwa series Priest (TOKYOPOP) in celebration of the upcoming film release. At Manga Xanadu, Lori Henderson runs us through the latest issue of Yen Plus (Yen Press), including ongoing titles Aron’s Absurd Armada and Jack Frost as well as the debut of Sirial’s new cat-centric manhwa Milky Way Hitchhiking. And at Slightly Biased Manga, Connie reviews volume two of Sarasah (Yen Press).