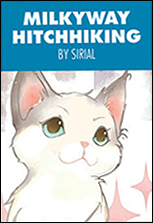 After last week’s whining about the lack of new manhwa licenses, we’ve discovered at least one, though we don’t know for sure whether there are plans to release it in print.

The December issue of Yen Plus advertises an upcoming manhwa series from Sirial (One Fine Day), called Milkyway Hitchhiking, about a cat with a pattern that looks like the Milky Way on his back. The series will be in full color, and is also Yen Press’ first simultaneous serialization. Let’s hope it sees print publication as well! Lori Henderson has some thoughts on the series in her write-up of December’s issue of Yen Plus. (Thanks to Michelle Smith for the tip!)

Robot 6 has an exclusive look at cover art for TOKYOPOP’s new Priest Purgatory series. And on the subject of Priest, 411 mania lists the upcoming film adaptation as one of its Biggest Comic Book Movies of 2011 .

iSeeToon continues their series on different types of manhwa with a look at Korean webtoons in their blog this week.

Blog of Asia attempts to explain the difference between manga and manhwa, drawing some interesting conclusions about both.

Here at Manhwa Bookshelf, Hana Lee translates the list of winners from Korea’s Reader Awards for manhwa in 2010.

This week in reviews, both Ed Sizemore of Manga Worth Reading and Richard of Forbidden Planet International take a look at Korea as Viewed by 12 Creators (Fanfare/Ponent Mon), offering a nice break from our usual cluster of Yen Press titles.