This month, we take a look at four one-shots from Digital Manga Publishing’s Juné imprint, Intriguing Secrets, The Object of My Affection, A Place in the Sun, and Temperature Rising. 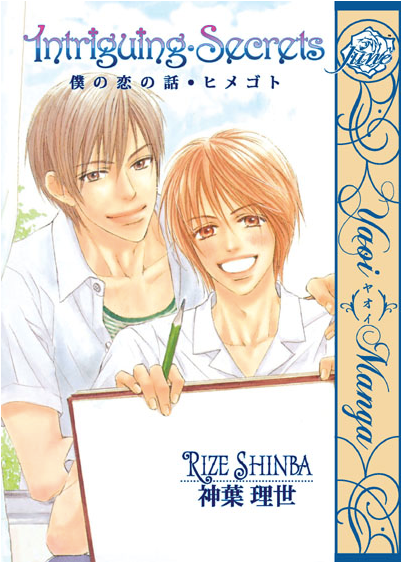 Intriguing Secrets | By Rize Shinba | Published by Juné | Rated YA (16+) | Buy at Akadot – After an accidental collision with a teacher in the hallway, high school student Mizue is sentenced to weed the school’s overgrown yard alongside his classmate Umehara, known to be the “class clown.” Umehara’s also been the center of some ugly classroom gossip, so Mizue is surprised to discover that he’s actually a pretty nice guy. He’s even more surprised to find himself drawn to Umehara in a vaguely romantic way, something of which he becomes immediately ashamed. When Umehara seeks him out in the art club room and asks him to paint his portrait, Mizue begins to wonder if his new friend might feel the same way, but every potential advance by Umehara is followed by a joke. Could Umehara’s teasing be a cover for something more?

Admittedly, it would be difficult to think of a more generic BL premise than the one just described. But if the worst that can be said about Intriguing Secret is that it’s unremarkable, that’s also its greatest strength. With its quietly mundane atmosphere, this manga promises love in the most ordinary places. Even its leads are an example of this message. Sure, Mizue seems to have some artistic talent, and Umehara is able to charm his classmates with a joke, but the two are so resoundingly noncommittal to who they are as people, it’s difficult to know what, if anything, they actually value. Mizue is reluctant to even say that he “likes” painting, while Umehara shrugs off everyone with a nearly audible “whatever.” Yet somehow, over the course of the series, they learn to be certain of each other, at the very least.

Though it may seem like I’m not making much of a point in the series’ favor, this practiced indifference is what actually makes the story work. With so little to build itself around, really nothing exists here but the romance itself, and this romance is undeniably sweet, from start to finish. Rize Shinba’s artwork is nearly as nondescript as her characters’ ambitions, yet, like everything else in this story, there is a quiet sweetness about it that holds everything together, as long as nobody’s trying to dig too deep.

Like a gauzy fabric on a warm summer day, Intriguing Secrets is comfortable and pretty, if not quite substantive. 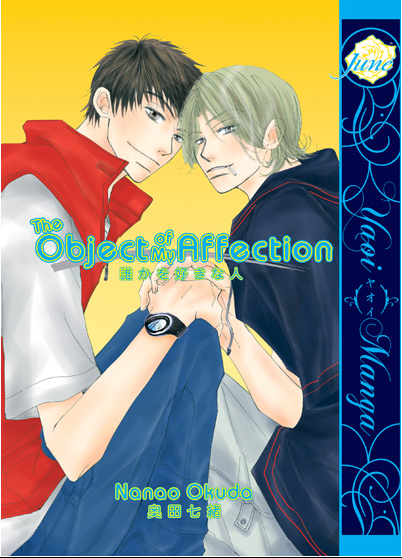 The Object of My Affection | By Nanao Okuda | Published by Juné | Rated YA (16+) | Buy at Akadot – Sometimes it’s not such a bad idea to judge a book by its cover. I knew nothing about The Object of My Affection or its creator, Nanao Okuda, but found the art style so appealing that I had to check it out. I’m very glad I did, because Okuda spurns typical yaoi characterizations, instead creating some sympathetic and emotionally accessible characters.

Back in high school, shrimpy Hiroki Wakamiya was dazzled by the athleticism of Wataru Anzai, a player on a rival school’s basketball team. He promised to catch up to him, and by the time college rolls around, he has improved (and grown) enough that he is recruited by the school Anzai plays for. His hopes of competing directly against his hero are dashed, however, when it’s revealed that Anzai has a busted knee and can no longer play.

Wakamiya is disappointed, but still finds himself drawn to Anzai, especially for his “inner strength contrary to the image given by his slender physical frame.” Anzai doesn’t like to show his vulnerability to anyone, but finds himself able to trust the honest and forthright Wakamiya. Though confessions of love are a little abrupt, their relationship unfolds at a believable pace, with Anzai taking on the role of encouraging coach as Wakamiya competes for a starting position on the team. I love that Okuda is much more concerned with depicting what these guys mean to each other than what they do in the bedroom.

Unfortunately, only the first four stories in this volume are about Wakamiya and Anzai. The rest focus on other players on the team and, though all are good and feature a head-over-heels seme in love with a guy who is elusive in some way, they lack the feeling of mutual need that makes the featured couple so compelling. Still, I enjoyed this title enough that a copy of Okuda’s only other English release—Honey/Chocolate—is now on its way to my front door. 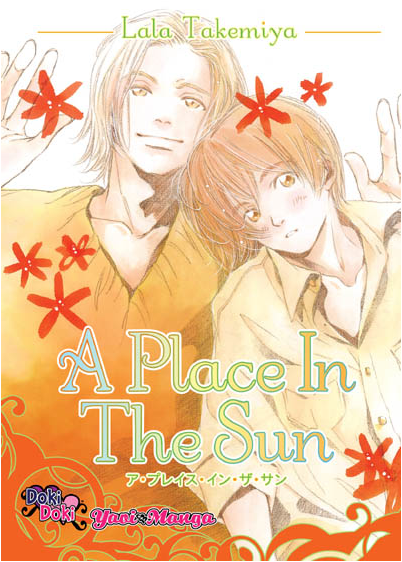 A Place in the Sun | By Lala Takemiya | Published by Juné | Rated YA (16+) | Buy at Akadot – “The things we could do if only we had more freedom,” muses Shu Tonosawa, one of the lead characters in the title story of A Place in the Sun, a collection of quirky tales by Lala Takemiya. Although Tonosawa is the only character to state this aloud, it’s actually a theme Takemiya plays with in several of the stories.

“Topping Boys” features a pair of long-time friends now in culinary school together. Yusuke, the more serious and talented of the two, compares his friend Hirosue to pasta, because he’s compatible with just about anything. To him, Hirosue’s seemingly endless string of short-term relationships is due to his propensity to fall in love too easily. In fact, the only person Hirosue really loves is Yusuke, but because he thinks all relationships are doomed to end, he’s not willing to destroy what they have.

“Afraid to Love” takes a similar approach, with one guy unwilling to admit his feelings to his friend because he’s afraid boredom will ultimately result. “A Place in the Sun” isn’t as overt with the characters’ emotions, but one definitely gets the sense that Tonosawa would be happy simply to bask in the radiance of his bright and cheerful coworker Midori, glad to be able to support him in all his endeavors without ever introducing romance into the equation.

While such a book might be disappointing for hardcore BL fans, I personally love stories that don’t turn out how one expects. When three of five stories in a collection don’t end with the couple getting together, and yet are still clearly love stories, I’m pretty impressed. I’m guess I’m just a sucker for the bittersweet.

I’m also a sucker for the awesomely random, so the fact that “Dustbin Space,” the longest story in the collection, features a romance between a guy who fails to sort his trash properly and an irascible garbageman is just icing on the cake! 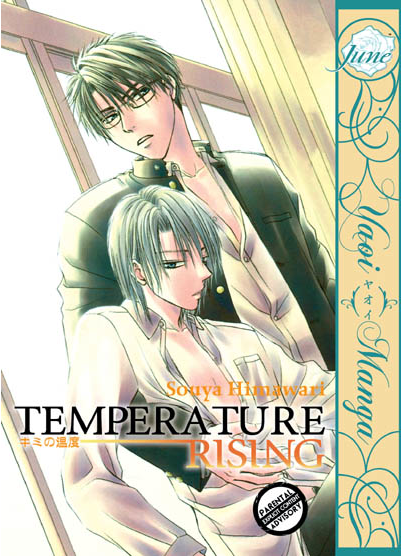 Temperature Rising | By Souya Himawari | Published by Juné | Rated Mature (18+) | Buy at Akadot – Teens Minori and Mizumo have grown up together, ever since Mizumo’s irresponsible parents left most of their children in the care of Minori’s family. Unwilling to take money from his caretakers, Mizumo has struggled to support himself and his siblings since he was in the fifth grade. When, in high school, Minori finally discovers that Mizumo’s primary income has been coming from compensated sex with older men, he offers to pay Mizumo for the service himself, in order to keep him out of strangers’ beds. But when Minori eventually realizes he’s fallen in love with Mizumo, he isn’t sure how to handle the new lack of balance in their relationship.

What a profoundly mixed bag this manga is. To a great extent, everything about it is horrifyingly wrong. A fifth grade boy is caught stealing and subsequently blackmailed into sex by the college student who catches him. Though the experience is (in his words), “gross and scary,” the kid lights up afterwards when the college student pays him and decides to make it into a career, since it’s a way to make money that “feels pretty good.” This is the backstory for a decidedly lighthearted romance? Seriously? Add to that a huge cast of characters, including a mass of half-developed siblings (carried over from the less explicit Happiness Recommended) so ultimately unimportant to the story that’s being told, it’s odd that any time was spent inserting them at all, and you end up with something both hopelessly confused and perhaps outright offensive.

Though this manga’s execution leaves much to be desired, what’s not quite clear is what mangaka Souya Himawari’s intentions were for it in the first place, and that’s where she gains herself back some points. There’s a strong scent of ambition here in all the intricately created (yet barely used) supporting characters and even in Mizumo’s presumably damaging background that is undeniably intriguing, despite the lack of follow-through. And for all that’s wanting in this story’s development, the book’s primary romance is actually pretty compelling, thanks to the real sense of history and unspoken familiarity Himawari creates between them, even in the book’s earliest pages. There’s so much untapped potential in these characters she obviously loves, it’s almost painful to watch their story play out as some kind of twisted, schoolboy retelling of “Pretty Woman.” Yet it’s difficult to turn away when there’s so much natural depth to be found.

While it’s impossible not to conclude that Temperature Rising ultimately fails, there’s enough romantic potential and strong characterization to warrant the read. And I’d really love to see the fanfiction.