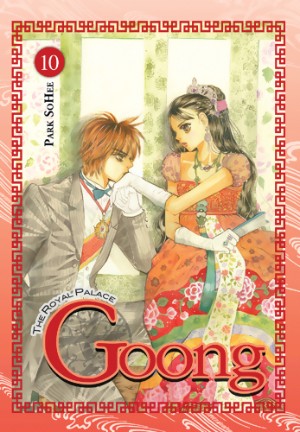 Welcome to another Manhwa Monday! First off, we’ll take a look at some upcoming manhwa releases.

Only Yen Press has new manhwa slated for this month, and just three volumes at that. Fortunately, this includes the latest omnibus release of Park SoHee’s Goong, a beautifully drawn cinderella story with a modern-day sensibility. Though this double-sized volume is number ten for Yen Press, thanks to the series’ new omnibus format, it actually contains Korean volumes 11-12.

Other releases this month include the 13th (and final) volume of Angel Diary and volume four of horror manhwa Jack Frost.

In other news this month, The Korean of Ask a Korean is asking for manhwa recommendations for one of his readers. Kate Dacey makes some suggestions in comments. Why not follow her lead?

Metanorn’s Manga Digest column takes a break from the usual to focus on some manhwa.

Over at LiveJournal, walkwithheroes asks, “What manga, manhua, and manhwa do you want to see on TV?”

And at the iSeeToon blog, we’re introduced to Jeong-Woo Seon (aka “mirugi”), who will be leading up their new informational manhwa feature. He starts off with an explanation of what makes manhwa different. Though the translation is a little rough at this time, it’s definitely readable, and very informative for manga fans especially, who may not realize how little the South Korean comics business resembles Japan’s.

This week in reviews, Kate Dacey lists Goong among her current reads at the latest Reading Pile at Good Comics for Kids. And at Kuriousity, Lissa Pattillo checks out two recent releases from Yen Press, volume ten of Legend and volume 11 of Black God.