Welcome to the second installment of BL Bookrack, a new, monthly feature co-written with Soliloquy in Blue‘s Michelle Smith.

This month we take a look at series from BLU Manga and Digital Manga Publishing, specifically
Calling and Scarlet from BLU and Midnight Bloom and Under Grand Hotel from DMP. 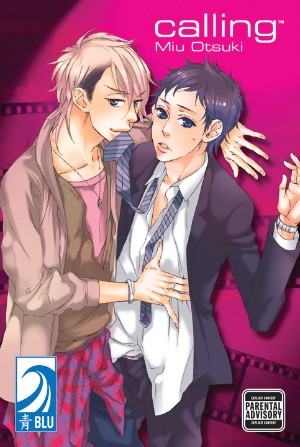 In truth, however, Calling is a surprisingly sweet story about two lonely young men discovering love for the first time. Even the story’s obvious cliches are handled with nuance and care.

Though inexperienced Kazuaki is a classic uke in most ways, his conflicted feelings as he begins to understand passion for the first time in his life bring a sense of poignant reality to his journey that is quite refreshing. Additionally, the contrast between the hours he spends hanging out with Kira and the dull apathy he feels all day at his job help make the rapid progression of their relationship genuinely believable.

Meanwhile, Kira’s stark surprise over the realization that he can actually feel love, a concept he’d long abandoned, makes the relationship easy to root for from the very beginning.

Both characters are well-developed in a remarkably short period of time. And though the volume isn’t at all ambitious in terms of plot, it’s nice to see the mangaka address the complications of Kira’s job, particularly its impact on his relationships with both his lover and his parents. The manga doesn’t delve too deep here, and perhaps Kira’s conflicts are resolved a bit too easily, but it’s a nice touch.

Despite an overuse of wide, tear-filled eyes and pouting lips, Miu Otsuki’s artwork is nicely expressive. Her understanding of body language, in particular, helps to highlight the story’s emotional depth.

If Calling is more warm than it is profound, that’s really not something to complain about. It’s the story’s focus on small moments that make it work so well in just a single volume. In a sea of disappointing BL one-shots, Calling is a welcome oasis indeed. 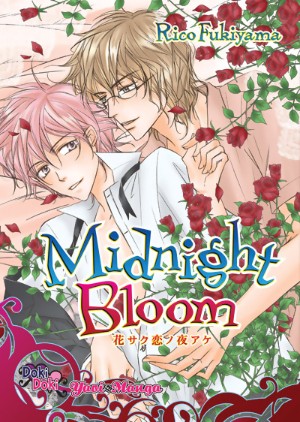 – I don’t always like the stories Digital Manga Publishing issues under their DokiDoki imprint (like, say, Millennium Prime Minister), but I usually do. That’s where less explicit boys’ love stories reside and, indeed, the title story of this collection, “Midnight Bloom,” fits the bill quite well.

It’s the story of Tatsuki, an actor, and Haruka, the florist with whom he falls in love. The author’s end notes reveal that Tatsuki was originally a character in another story who was jilted in the end. “Midnight Bloom” exists chiefly to give Tatsuki a happy ending, and this it does. He and Haruka fall in love quickly, swiftly divulge their deepest feelings, and work companionably to put Tatsuki’s painful past behind him. Although everything’s a little too easy, it’s still pretty cute and I liked that the characters were finding true happiness with other than their first loves.

Alas, the rest of the stories in the collection are quite disappointing. “The Big Shiba” is about a spoiled rich kid named Hana whose father never let him have a dog. When his umpteenth step-mom kicks out her chauffeur/lover, Shirou, Hana takes him in. After a few weeks of Shirou playing nice doggy his more wolfish instincts take over. I’m sure you can guess where this goes. “Now and Then, My Heart Pounds” tells the story of an eighteen-year-old heir to a family inn who’s sort of apprenticed to another inn as appeasement for an arranged marriage agreement gone wrong and ends up in a relationship with a pervy thirty-year-old guy.

As if that wasn’t bad enough, the absolute worst story in the volume is “Scratch That Itch,” a particularly creepy student-teacher romance. Sometimes these kinds of stories can be handled without ickiness—perhaps only when the student is physically mature, self-assured, and the instigator—but that is definitely not the case here. The teacher entertains extremely off-putting thoughts like, “I want to see him shamed and filthy” and “All I have to do is catch him off-guard” and makes the first move on his student. I always wish for the kid to be properly traumatized when an older authority figure suddenly turns the tables on them in this way, but no, his only objection is that they should wait until they’re officially dating. Fukiyama writes that this scenario was especially requested by readers, that but she put the kid in a baseball uniform to spice things up. Ugh.

In the end, Tatsuki and Haruka’s story is bland but inoffensive and everything else is even worse than that. This one’s not worth your time. 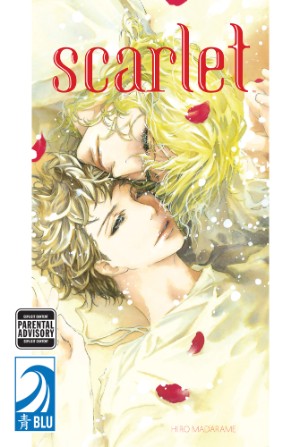 – When I reviewed Hiro Madarame’s Cute Devil back in May, I mentioned that while I liked her frequently cute (and amusing) art, I’d like to see what she could do with more sympathetic characters. Scarlet is actually her first comic but it ended up providing the answer.

Technically, this is a collection of short stories, but since only three couples are featured it feels less disconnected than others of its ilk. The title story and its follow-up, “Scarred,” depict the love story of Akio and Ryo. Ryo’s a transfer student whose European good looks make him somewhat of an idol at school, but he’s actually very lonely, very impressionable, and not too bright. He becomes attached to his first friend, Akio, and soon declares his love. The two begin a relationship, but Ryo is unable to refuse advances from others and cheats on Akio often. Obviously, Akio’s not happy about this, but Ryo is so genuinely, abjectly sorry every time that Akio keeps forgiving him.

When Ryo falls into the clutches of a manipulative girl who wants Akio out of the way for good, Ryo goes along with her plans, resulting in a disturbing attack on Akio. Nonconsensual scenes are lamentably de rigeur in boys’ love, but I do have to give kudos to mangaka who don’t shirk from depicting how awful the act truly is. Some will be infuriated by what happens next with this couple, but I don’t think it’s necessarily supposed to be romantic. At least, I hope not.

In addition to two merely decent stories about a couple with seemingly mismatched personalities, the volume is rounded out with a pair of stories called “One Night Stand” and “One Night Stand Again,” which are my personal favorites. Harumi is a gay man working in a repressive environment where he does his best to fade into the background. Every morning he rides the elevator with Toki, a charismatic coworker for whom he pines helplessly, but never speaks to him. One night, when Harumi spots Toki at a gay bar, he can’t believe his luck. Seizing the chance, and confident that his bar-hopping appearance is different enough from his workplace garb to avoid being recognized, he proposes a one night stand and the curious Toki accepts.

It’s a bittersweet evening for Harumi, and he has regrets afterwards. Toki does not and it doesn’t take him long to equate the guy from the bar with the guy in the elevator. Because Harumi’s so shy, however, Toki is content to take things at his speed. “Take all the time you need to get close to me,” he narrates as their tale comes to a close. Really, their story is simultaneously mature, sexy, and sweet, which is pretty impressive feat for a first-time mangaka!

I mentioned Madarame’s cute art, and it’s certainly put to good use here. True, sometimes her art can be a little messy-looking, but there are quite a few passages with great comedic timing and an amusingly simplistic style. Most often this appears in “Scarlet” and “Scarred,” used in good effect to depict how Ryo lights up when Akio looks his way, but there’s a really cute sequence between Toki and Harumi as well in which the latter dares to dream they might actually go out for lunch together. I also appreciate that the explicit scenes don’t feel as if they’ve simply been shoehorned in to fit some quota; they’re steamy without feeling smutty, if that makes sense.

All in all, I’m very impressed by Scarlet, though it’s rather disappointing to realize she followed this up with Cute Devil, a story of a power-imbalanced couple. Oh well. Can’t win ’em all. 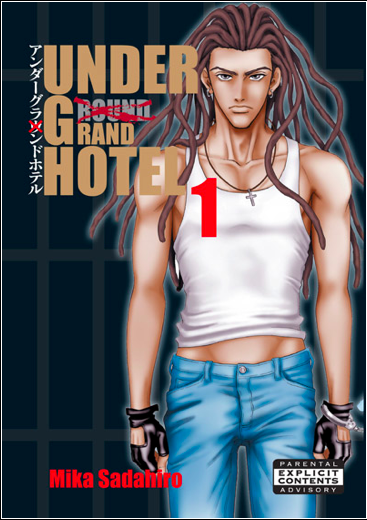 – Having been convicted of murdering his lover’s husband, Sen is sentenced for life to an underground prison buried in the depths of Long Island, nicknamed “Under Grand Hotel” by those who live there. It’s a rough introduction for Sen, who is beaten, raped with mop, and stuffed in a dryer by a child-molesting cannibal (no, really) all within the first 24 hours or so of his imprisonment.

He’s rescued from all this by Sword, a prison badass who has a reputation for dominating guys like Sen. The two become cellmates, and eventually enter into a sort of strange, desperate relationship.

Okay, let’s be honest here. Under Grand Hotel is a fantasy in the most complete sense of the word. It is, from its very first pages, elaborately constructed to sweep yaoi fans off their feet in the most dramatic way possible. It is violent, melodramatic, deeply unbelievable, and one of the most effective examples of romantic pornography I’ve ever seen.

This thing is epic, no less so than the likes of Korean favorite Let Dai, but without any flowery speeches or extended internal monologues standing in the way of its true mission–a whole lot of rough, manly sex. “Manly” really is the key here. This story isn’t populated by any of the wispy little bishonen found in most of the BL manga that’s been imported to the west. These men are big, heavily-muscled, and actually kind of terrifying much of the time. They are also angry and aggressive, regardless of whatever roles they play in the sack.

What’s most impressive about this manga in a narrative sense is how intense its world is, and how real Sadahiro is able to make it feel, at least while immersed. Reading this manga is like falling into the thrall of a very strong painkiller–the world reduced to a feverish bubble that both heightens and dulls the senses at the same time. It’s a dark world, to be sure, but one so far from the reader’s reality, it simply whets the appetite for more. “More darkness!” the mind cries out. “More pain!” Even the constant barrage of rape is somehow acceptable and even enticing in this utterly fantastical world.

Does that sound like hyperbole? Well, it may be. But this story begs for ridiculous description, just as it begs to be read, at least by the genre’s hard-core fans.