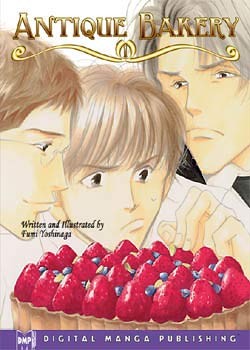 As I begin this article, I find myself struck by the impossibility of saying anything about Antique Bakery that hasn’t already been said.

Undoubtedly Fumi Yoshinaga’s most celebrated work, at least on this side of the Pacific, this story of four men working in a western-style patisserie in Tokyo first hit US shelves in 2005, three years after completing its original run in Japan’s Wings magazine. The series is a Kodansha Manga Award-winner, a 2007 Eisner nominee, and entirely deserving of both.

Yoshinaga utilizes all her greatest strengths in this manga, rich characterization, rambling dialogue, and a deep love of food. The descriptions of the bakery’s various specialties is enough to make any pastry-lover swoon (enhanced by DMP’s scratch ‘n’ sniff covers). Her gift for gab brings this corner of Tokyo alive–especially the bakery’s customers, who wander in from all walks of life. Where Yoshinaga really outdoes herself, however, is with her delightful quartet of male leads.

The first volume begins with introductions, though it jumps around quite a bit in the story’s timeline. We meet a teenaged schoolboy who confesses his love to a male classmate, only to be brutally rejected; a similarly-aged schoolgirl who admires a braver girl from afar; a brilliant young boxer whose career has abruptly ended due to a physical defect; and a weary salaryman who finds an evening’s solace in the works of J.S. Bach and a shortcake from the department store bakery. 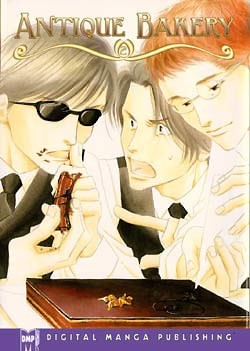 These disparate characters are finally brought together at the bakery “Antique.” Two of them are customers (the schoolgirl and the salaryman) who find their way to their neighborhood’s new bakery with a mixture of surprise and delight.

The others are inhabitants of the bakery itself. Yusuke Ono, the boy whose heart was crushed so cruelly in junior high, is the bakery’s genius pastry chef. The boy who rejected him, Keiichiro Tachibana, is its owner. And the boxer, Eiji Kanda, is Ono’s promising apprentice.

As the series goes on, each of these characters’ histories is further revealed, including their relationships to each other and the journeys that led them to the Antique. Ono’s story is told first, which, despite its rather dramatic beginning, is by far the least tragic. As it happens, his devastation over Tachibana’s rejection serves as a springboard to a new life of self-awareness and sexual freedom that takes him to Paris and back again.

Kanda’s tale is much sadder, though his love for sweets has at least given him a chance at a new career. Tachibana’s journey, however, is both somewhat tragic and opaque, its path forever altered by his childhood experience as a kidnapping victim.

The bakery’s fourth personality, Chikage Kobayakawa, Tachibana’s childhood friend and bodyguard, is not introduced until the second volume, and though his status as a bumbling hulk might normally doom him to a role of perpetual comic relief, he is actually one of the most poignant characters of the bunch. 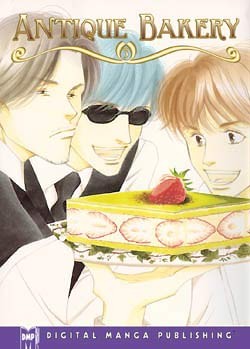 Though much of the series maintains a slice-of-life sensibility, chronicling daily business at the bakery, broken up by various events and small personal dramas, the series’ final volume takes a more dramatic turn, as a new rash of child kidnappings commands Tachibana’s involvement.

Though this is undeniably the most plot-driven section of the series by far, it is still heavily rooted in characterization, as its main purpose is to reveal more about Tachibana’s motivations and to move him along to the next stage of his life. While this shift in tone seems rather sudden, it provides some unexpected momentum for the series’ final volume, while uncovering much substance within Tachibana, ultimately to great effect. It’s quite telling that the cover art for the fourth volume is the only one in the series to portray just one character.

Praising this series may be easy, but categorizing it is not. Western readers frequently classify it as yaoi, but that label seems woefully insufficient and even misleading. Though its cast certainly contains gay characters (more who actually identify as gay, frankly, than most yaoi I’ve personally read), romance is minimal and hardly the point.

This is not coy, homoerotic fantasy, nor is it anything approaching pornography. And, “Yama nashi, ochi nashi, imi nashi” (No climax, no point, no meaning)? Utterly inappropriate when applied to this series.

This is not a negative statement about yaoi, by the way. I’m a fan, after all. This series just seems so far removed from anything in that genre, that calling it “yaoi” makes as much sense to me as categorizing Detroit Metal City with NANA because they’ve both got characters in bands. From the evidence I’ve seen (including the stack of BL manga sitting here in front of me), yaoi sits squarely in the romance genre. Antique Bakery simply does not. 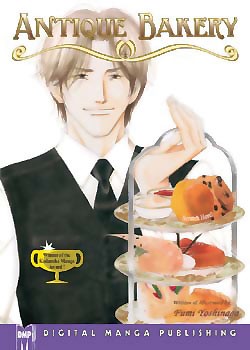 What Antique Bakery has going for it is an impressively rich cast of major and minor characters, both gay and straight, male and female, upon which it places a lens much broader than can reasonably be allowed by romance. Its strength is its lack of any particular focus, unless you count a delightful obsession with sweets.

Lack of focus, however, does not constitute a lack of specifics. Each of the characters is fully-formed, regardless of what else is going on–even the ones who appear for only a chapter or two. And the series’ main characters are beautifully fleshed-out, even those with the most comedic roles.

Yoshinaga’s artwork is as unique and expressive as usual, though she makes particularly strong use of wordless panels in this series. The nearly three full wordless pages devoted to Tachibana’s reaction to his own cruelty to Ono (from a flashback in volume four) are some of the most affecting in the series.

However you choose to classify it, one thing is clear. Like the many cakes and pastries described within its pages, Antique Bakery is a delight few can resist.