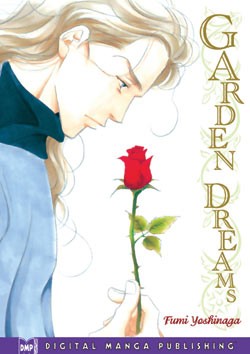 Garden Dreams tells the story of Farhad, a young boy orphaned by the Crusades, who is rescued from the desert by Saud, one of his own people who has lost his family as well. The two make a living as traveling musicians, which eventually brings them to the estate of a foreign baron.

This visit will transform both of their lives, reuniting Saud with a loved one he thought long gone and providing Farhad with a new family and a place to call home.

Though Farhad’s story is the thread holding this manga together, the volume is actually a series of short tales, including a substantial look into the baron’s tragic past. This structure reads like a bit of a tease, with everything folding into a story-within-the-story by the end.

Though this isn’t exactly a bad thing, it does create a sense of distance between the reader and the characters unusual in Yoshinaga’s work. Absent is the intimacy offered up by series like Flower of Life, Antique Bakery, or Ichigemne…, replaced instead by the detached feel of an external narrator.

With this in mind, it’s no surprise that Yoshinaga’s normally chatty dialogue is subdued here as well, though this may be due to the period setting as much as anything else. Her style shines best with casual conversation, and there is little of that in this volume. That said, each of the stories has a classic, fairy-tale quality that is a pleasure in itself. There’s no lack of touching moments here, either, beginning from the manga’s opening pages.

Perhaps the most moving of these tales is the least like a proper story at all. In the volume’s final chapter, a letter is received from the baron’s adopted daughter, who earlier in the book had fled into the night with Farhad’s “brother” Saud. Weary of his inability to accept loss, the baron asks Farhad to commit suicide with him. Though this may sound horrid to the extreme, it’s actually quite poignant and so delicately drawn, it actually brought tears to my eyes.

Yoshinaga’s artwork brings out the best in these stories, which might otherwise fade quickly from memory. Her use of panel layouts to convey emotion in these particularly reserved characters is, frankly, quite stunning. Though I might miss the easy expressiveness of her talky, modern-day tales, it is a pleasure to watch the way in which she is able to bring forward strong feeling using other means.

Garden Dreams is by no means Yoshinaga’s best work, but its quiet meandering displays some true charms of its own.