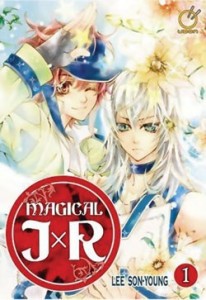 Magical JxR | By Lee Sun-Young | Published by Udon Entertainment | Rated Teen (13+) – Jay and Aru are young wizards, ready to graduate from wizarding school. To fulfill their final graduation test, they must make a contract to help a human girl, Cho-Ah. Hidden in the fine print, however, are the contract’s real terms, mandating that the two of them spend an entire year with her!

Though the previous appears to be the intended plot for this manhwa (as evidenced by very similar copy on the back of its cover), it’s difficult to know for sure, since the concept doesn’t actually appear until halfway through the volume. Though the earlier chapters do revolve around the two wizards as little boys, they read like false starts, as though Lee (or her editor) changed her mind several times before deciding on a story to tell.

As a result, the series’ first volume is a fairly frustrating read that really doesn’t get anywhere until the last few pages, in which it introduces the story’s main plot before cruelly coming to an end. Fortunately, it is the story’s most intriguing characters, Jay, Aru, and Cho-Ah, who will advance to the series’ next volumes.

Jay and Aru may be wizards, but it is their contrasting personalities (ice cold Jay and smiling Aru) that make them worth reading about, not their run-of-the-mill magical powers. Their relationship as partners is fun to watch as well, though this is more effectively established in the volume’s later chapters than in the early bits of backstory.

The real star, however, is Cho-Ah, who struggles between her natural abilities as a martial artist and her desire to be seen as a girly-girl. And it is the prospect of learning more about her that makes the most compelling argument for moving on to further volumes.

Lee’s artwork is a mishmash of beauty and chaos, with pretty, pretty character designs (quite similar to those by Sirial in Yen Press’ One Fine Day) and over-crowded panels that are sometimes so spastic and so full of different types of text, it’s difficult to tell what to read first. The worst of the mess has calmed by the volume’s later chapters, however, providing much hope going forward.

Though Magical JxR is by no means original or even particularly coherent, Lee’s pretty artwork and likable female lead provide enough genuine charm to warrant moving on to the next volume.