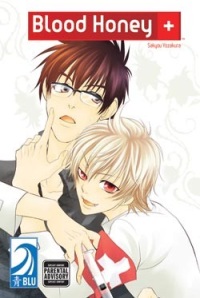 Yuki Akabane is a vampire, but descended so far down the line, the only family trait he retains is a thirst for blood. His job as a nurse at a blood donor clinic keeps him hooked up with occasional meals, but his intake gets jacked up immensely by an obsessive donor named Osamu Mayazumi. Mayazumi is a teacher with a bad temper that seems to be quelled by donating blood, and thanks to a fear of needles, the only nurse he’ll trust is Akabane.

Frequent visits to the clinic shift to nightly dinners at Akabane’s home, and before they know it, the two are harboring feelings for each other more serious than those of donor and nurse.

Despite the fairly creepy premise, this series’ most consistent trait is that it is quite simply a lot of fun. Yozakura’s sense of humor fits her characters perfectly, particularly in the second half of the book, where she introduces Akabane’s precocious nephew, Kiri. The book is undoubtedly tongue-in-cheek, but it thankfully lacks the overblown ridiculousness of some humorous yaoi. As a bonus, there are some genuinely touching moments as well.

Yozukura’s artwork is quite expressive and frankly adorable, though her characters fall visually into the typical seme and uke roles, almost to the extreme. Thanks to that, both Akabane and his nephew look about fifteen, one of the book’s few major downsides.

Though it’s certainly not profound, Blood Honey is a fun, sexy, take on the current vampire trend.