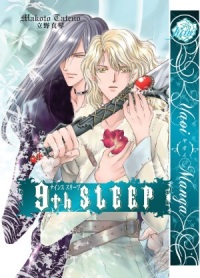 Luke is the child of a “Maria possession,” meaning that his mother was still a virgin when he was born. What he soon finds out is that he is also a god-prince fallen to Earth, as well as the reincarnation of the “King’s Soul,” which he received upon the death of his father. Unwilling to wed the bride chosen for him, Luke carried that soul with him when he committed suicide sixteen years previous and placed it in the womb of the earth-woman he loved.

Now that sixteen years have passed, he must fight his “brother” Malchus for possession of their father’s soul and kingdom.

If that summary seems convoluted, that’s no mistake. The premise of this manga is extraordinarily opaque, despite the fact that the mangaka attempts to explain it repeatedly, mainly by playing out the original scenario two more times over the course of the volume. In each incarnation, Luke avoids his final standoff with Malchus by killing himself, thus impregnating another unsuspecting young woman on the earth below.

While boys’ love plotlines are rarely required to be coherent (or even to exist at all) in order to attract a major portion of their fanbase, in this case there is also no boys’ love to speak of, leaving very little for fans of the genre to latch on to. Though the mangaka does offer up very pretty drawings of her two warring brothers, even standard fan service is in short supply.

Despite some attractive artwork, a confusing, vapid plot and lack of boys’ love action leave this one-shot manga without a clear audience.