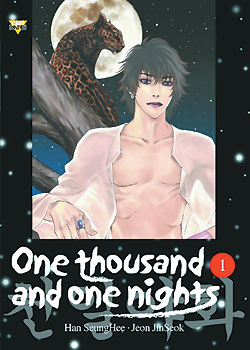 One Thousand and One Nights, Vols. 1-6 | By Han SeungHee and Jeon JinSeok | Published by Yen Press | Rated OT (16+) – Loosely based on the original tales told by Scheherazade to her mad Persian king, in this version of One Thousand and One Nights (originally published in English by ICE Kunion, later picked up by Yen Press), “Scheherazade” is a bookish young man named Sehara who has joined Sultan Shahryar’s harem in his sister’s place, in order to save her from being raped and beheaded like a string of young women before her. When Sehara’s gender is revealed, Shahryar has him thrown into a prison cell, where Sehara meets the long-imprisoned Emir Jafar, former friend and confidante of Shahryar, who tells him the story of how the sultan went mad after discovering his beloved queen Fatima’s infidelity. Shahryar banished Fatima, and soon after began the daily execution of virgins from his harem. As Jafar finishes his tale, Shahryar bursts into the cell, along with his bodyguard, Maseru, promising to have them both killed for mocking him. It is then that Sehara asks to be allowed to tell Shahryar a story, after which Shahryar may kill him as he pleases. After listening to the story, Shahryar brutally beats Sehara but does not execute him, and instead declares him a bard of the court, thus beginning the thousand and one nights.

Before becoming the court bard, Sehara made his living translating books from China, India, and Greece, so he draws his stories from many sources, telling tales of Turandot and Calaf, Cleopatra and Caesar, and Socrates and Alcibiades, as well as fairy-tales and fables well-known in many cultures, such as “The Angel and the Woodsman.” Each tale is told beautifully, if with questionable historical accuracy (the story of Cleopatra, for instance, portrays her in an unusually gentle light, particularly as concerns her relationship with her younger brother and husband, Ptolemy XIII), but more importantly, Sehara’s stories, and indeed Sehara himself, begin to teach Shahryar how to love again, rescuing him slowly from the madness that has overtaken him. Shahryar may believe himself merciful for allowing Sehara to live, but it is Sehara’s mercy that will ultimately save Shahryar. Eventually, Shahryar begins to realize this, finally confessing to Sehara in volume five, “Jafar protects me from sly politicians, and Maseru protects me from enemies and assassins. You, Sehara, protect me from myself.” Their relationship is reminiscent of that between Ash Lynx and Eiji Okamura in Akimi Yashida’s classic shojo manga, Banana Fish (though more overtly sexualized), as both stories feature a pure, open heart coming to the rescue of a man with too much blood on his hands. 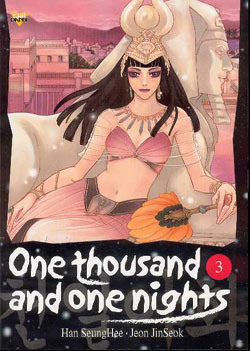 Though One Thousand and One Nights is clearly a love story between Sehara and Shahryar, it is first and foremost a good story, raising it above the ranks of trite romance. The many stories-within-a-story told by Sehara provide endless variations on the theme of love, with much attention given to the cultural differences between each story’s place and time. Cleopatra, after all, was required to marry her own brother by law, a practice still accepted in Sehara’s Persia, while Socrates’ relationship with his male lover, Alcibiades, though commonplace in ancient Greece, would be reviled by Persian custom of Sehara’s day. Sehara’s stories are told with a melancholy beauty, dark and sweet, and emerging from one of them is much like waking from a deep, hazy dream. It is the overarching story, however, that provides the heart that makes this series special. Its primary characters are richly drawn and idiosyncratic, and their relationships with each other are complex and delicately nuanced. There is very little black-and-white in these characters’ lives, despite what they may think, and it is a pleasure to watch their stories unfold, even when they are their worst selves.

In older versions of this tale, though Sultan Shahryar was ruler of the Sassanid Empire, which pre-dates the Islamic conquest of Persia, the stories made frequent reference to the teachings of Islam. In One Thousand and One Nights, writer Jeon JinSoek draws Sehara’s stories from all over the world and from many different eras, while preserving the Islamic focus in the main story. Though JinSeok is careful to portray a balanced view of Islam, particularly as it concerns women, he does not shy away from the inherent sexism and brutality of the time period, in which a mad ruler may indiscriminately murder his female subjects, who he rightfully (by law of the time) considers to be his property. Women are second-class citizens in this world, and this is not something even Sehara can change. He strives gamely to break through Shahryar’s damaged heart and re-establish in him respect and compassion for women, but, as Shahryar reminds him early on, if his own sister had been discovered to not be a virgin, it would have been Sehara’s duty by law as her brother to behead her. Not that there aren’t consequences for Shahryar’s misogynistic behavior. He faces threats from both inside and outside his empire during the course of the story, and volume six ends with his rule (and Sehara’s life) in peril, mainly thanks to his own weaknesses and poor decisions. Ultimately, however, the story has less to say about sexism than it does about the corruptive power of absolute rule. 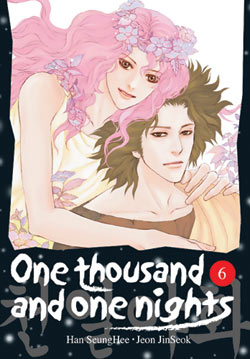 Despite the unattractive covers of these volumes (unfortunately carried over from the original ICE Kunion editions), each page of One Thousand and One Nights is a pleasure to behold. Han SeungHee’s artwork is intensely beautiful and drenched in romance, from the period settings to the thick strokes of the character’s eyelids. All the characters, both male and female, are lovely to look at, though many lack beauty on the inside, which is what this story is about. SeungHee captures the story’s lush sensuality and fiery drama perfectly, as well as the unexpected moments of humor which crop up with increasing frequency as the series goes on.

One Thousand and One Nights is a beautiful, compelling series that is pleasurable both to read and to look at. With at least five more volumes coming, it has the potential to become a classic of its kind, as long as it continues with the same strength JinSeok and SeungHee have displayed so far.