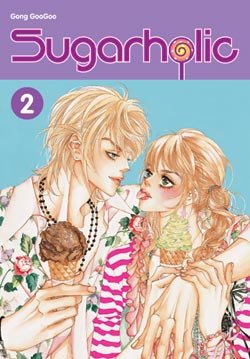 Sugarholic, Vol. 2 | By Gong GooGoo | Published by Yen Press – Thanks to the power of guilt and her desperate need for cash, Jae-Gyu finds herself being reeled in by Whie-Hwan’s proposal that she pose as his girlfriend for a month. Meanwhile, childhood “friend” turned pop idol Hee-Do is dreamy-eyed over a photo of himself with Jae-Gyu, snapped by a fan during their recent encounter (to the extreme dismay of his handlers). Unfortunately, things continue to be difficult for Jae-Gyu in this volume as she faces her new life in the big city. First, she is easily lured into a quasi-prostitution scenario by some unscrupulous coworkers of her friend Hyun-Ah. Later, her brother’s borrowed apartment falls through, leaving her on her own. With all circumstances leaving her more and more dependent on Whie-Hwan for her survival, Jae-Gyu begins to feel a bit attached, but is she in over her head?

Nothing earth-shattering or even truly unexpected happens in this volume, yet the story’s characters remain quirky, charming, and generally fun to read about, which is definitely its primary draw. Jae-Gyu’s childlike tactlessness and oddly random sense of responsibility make her a unique heroine even within a common manhwa mold, and Whie-Hwan’s frequent loss of cool keeps him from fully becoming a genre cliché. It is Hee-Do, however, who provides true mystery in this series with a personality that, at least at this point in time, is just too weird to unravel. This is not a liability by any means. Though his single-minded devotion to Jae-Gyu (who is apparently still anticipating some kind of revenge) is undoubtedly a tad creepy, it is also inexplicably sweet. Lingering over the cell phone photo of himself with Jae-Gyu running away from him he muses over how little the photo does her justice, thinking, “You’re the kind of person who sparkles most when you’re moving.” He’s a character who lives so completely in his head it’s astounding that he’s able to function in the world at all, let alone as a public figure, which may be the secret to what makes him so fascinating.

Further insight into Whie-Hwan’s past is still too vague to be quite compelling in this volume, though it certainly promises future intrigue. The same could be said for the brief sidestep into the story of Jae-Gyu’s brother, which fades into the background all too quickly. Yet, even without major plot development, the volume maintains momentum, thanks to its messy, likable characters.

Though so far lacking the heavily addictive quality of Goong or One Thousand and One Nights or even the fantastic strangeness of 13th Boy, Sugarholic remains a fresh, fun addition to Yen Press’ lively lineup of girls’ manhwa titles.