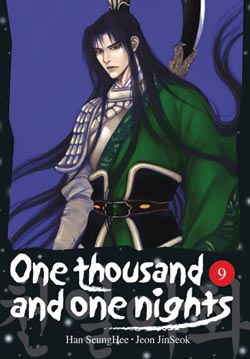 One Thousand and One Nights, Vol. 9 | By Han SeungHee & Jeon JinSeok | Published by Yen Press – With the disgraced sultan Shahryar on the run and brother Shazaman hot on his trail, the Caliph names Emir Jafar as temporary sultan of Baghdad, passing on to him the task of taking back Jerusalem from the western invaders. Though he has no choice but to comply, Jafar has other matters on his mind such as uncovering the truth about Shazaman and Fatima. Thankfully, with a bit of luck and a bit more stealth, Jafar stumbles upon a horrifying secret which reveals that Shahryar is, stunningly, the sane brother, despite his history as a misogynistic serial murderer. Meanwhile, Shahryar and Shazaman face off in the desert as raging storms turn the terrain into a flash flood zone. Over in the western camp, King MacLeod is putting the moves on Sehera, by which I mean giving him books, namely 14th-century Chinese historical novel The Romance of the Three Kingdoms which becomes this volume’s story-within-a-story.

Like volume eight, this volume suffers a bit from the affliction I like to call “Lack of Sehera,” but there is plenty of plotty goodness to fill the void, particularly concerning the history of Shahryar and Shazaman’s relationship with each other and with their childhood friend Jafar. With current events juxtaposed against scenes from their childhood, it’s hard not to feel pain for both brothers and impossible to avoid the question of just how both of them became so irretrievably twisted as adults. Though, thanks to Sehera’s influence, Shahryar has begun to seek a kind of personal redemption, Shazaman’s emotional wounds remain open and untreated, infecting him to the core.

Aside from this volume’s drama between brothers, a real highlight is Sehera’s retelling of The Romance of the Three Kingdoms, which ends the volume with a painful lesson for MacLeod who may be about to learn that despite Sehera’s devotion to duty, his loyalty ultimately belongs to another. Though what appears here is obviously just a tiny fragment of the original Chinese epic (which stands at 800,000 words and 120 chapters) it is more than enough to entice readers to seek out the source material for more. This was, apparently, a strong motivation for its inclusion in the story, as the volume’s endnotes reveal writer Jeon JinSeok’s desire to introduce the testosterone-heavy novel to a new generation of female readers who may not have been otherwise encouraged to check it out. Though I’m unable to speak for the young women of South Korea, I can certainly confirm that his plan has worked on me.

With several characters’ lives hanging in the balance (really) by the end of the volume, the tension in this series shows no sign of letting up anytime soon, and with only two volumes remaining, readers face a single burning question: how to survive the wait until the next volume.