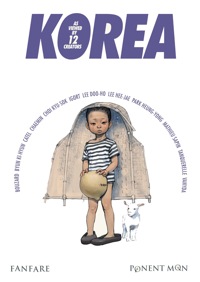 Welcome to another Manhwa Monday! A bit of recent news comes from the Toronto Comic Arts Festival, where British publisher Fanfare/Potent Mon debuted Korea As Viewed By 12 Creators, their long-awaited follow-up to 2006’s Japan As Viewed By 17 Creators. The book’s official PR describes it as, “Twelve insightful short graphic stories into the ‘Hermit Kingdom’, six by European and six by indigenous creators, including award winning Park Heung-yong and ‘Best Manga 2006’ artist Vanyda.”

Originally listed as a winter release in Fanfare’s 2007 catalogue (and again in 2009‘s), this has been a highly-anticipated title for quite some time. A quick check-in with About.com‘s Deb Aoki confirms that the book did indeed appear on the convention floor!

Due for full release in July, word on the cyber-street suggests that this collection of Korean and French stories is a must-buy for fans of Korean comics. I look forward to seeing it for myself!

In other news, Comic Seoul returns (“sort of”) after a lengthy hiatus with summaries of new chapters of Goong and Habaek.

Last week offered just a handful of reviews from the blogosphere. First, Kate Dacey looks at volume two of One Fine Day (Yen Press) at The Manga Critic.

If Sirial’s approach to the material remains unchanged from volume one, his artwork is cleaner and more assured in volume two; the linework is firmer, giving the characters a more solid appearance, and the panel flow is smoother.

While you could swing a stick and find a few dozen other setups with the same blueprint, Croquis Pop sells it with an infectious dose of enthusiasm … I felt like I’d read something that deserved notice because it was trying so hard (and succeeding on its own terms).

Volume three of Sarasah continues on the second volume’s trend of well appreciated new content and plot elements that help raise the series up from its superficial beginnings … The series still needs a bit more kick but a building cast of interesting characters and a potentially deadly political mess brewing in the background looks promising.