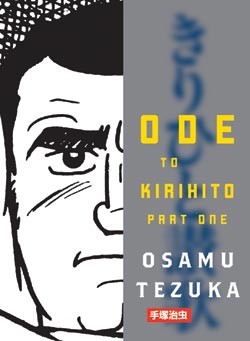 Kirihito Osanai, a young doctor with a prestigious university hospital, is deeply engaged in the study of Monmow Disease, an endemic condition that has overtaken the remote village of Doggodale. The disease reshapes the skeleton of its victims until they resemble dog-like creatures, ultimately resulting in death. Though Kirihito’s superior, Dr. Tatsugaura, has banked his career on Monmow being caused by a contagious pathogen, Kirihito believes it is an organic disease–a belief shared by his old friend and colleague, Dr. Urabe.

Urged on by Dr. Tatsugaura, Kirihito reluctantly leaves home to spend a month researching the disease onsite in Doggodale–a trip from which he is not meant to return. Thanks to Dr. Tatsugaura’s machinations, not only do the villagers repeatedly attempt to kill him, Kirihito also contracts the disease. And when his research finally leads him to the truth about the condition’s origin, a frantic call home reveals that Dr. Tatsugaura has erased his identity from the hospital records, leaving him helpless in his beast-like state.

Unrecognizable and alone, Kirihito becomes caught up in a series of increasingly degrading experiences that lead him across much of Asia. Meanwhile, in an effort to discover what happened to his friend, Dr. Urabe begins to uncover the depth of Dr. Tatsugaura’s corruption, leading him to truths he’s not fully prepared to handle.

Ode to Kirihito explores man’s darkest and most primitive urges–not by way of those whose bodies have literally turned to beasts, but rather through the increasingly hideous impulses of men who remain outwardly “normal,” most of whom represent depravity in one sense or another. Even Dr. Urabe, whose professional loyalties remain untainted by ambition, is unable to rise above his ugliest desires, ultimately rendering him no more civilized than the corrupt establishment he eventually attempts to fight.

Despite its undeniably somber tone, the series’ first volume is briskly paced and well-plotted, with brutally honest characterization and razor-sharp dialogue that goes a long way towards preventing the story’s messages from becoming irretrievably heavy-handed. What really brings it all together, however, is Tezuka’s artwork, which is wildly ambitious and (thankfully) just as successful.

There are two aspects of this series’ artwork that are particularly effective on an emotional level. First, the meticulous detail in Tezuka’s landscapes and backgrounds create what can only be described as a thick emotional tapestry–not just panel by panel but panel to panel. Tazuka uses shape and texture to cast emotion over multiple pages at a time, imposing cutting rain and angry teeth over the huddled curves of human agony, and lulling his characters (and his readers) into a sense of false comfort with the orderly flow of well-kept farmland.

Second, is the power of the series’ human imagery. A scene, for instance, in which a young nun with advanced Monmow is being displayed as a specimen to an auditorium full of physicians is so striking in its portrayal of her nobility in the face of unrelenting humiliation–her lone, proud figure standing against the sneering darkness–it easily moved me to tears. Tezuka’s artwork depicts both the cruelty and vulnerability of man with a combination of stark honesty and true compassion that makes it impossible to ignore either in favor of the other. His characters are both repulsive and sympathetic, often at the same time.

If these descriptions read as hyperbole, be assured that they are not. The quality of Tezuka’s imagery is truly this stunning, so much so that it’s difficult to return to other comics afterwards without feeling that something crucial has been lost. As lovely and emotionally resonant as much manga art can be, it is rare to find such rich visual storytelling in which the artwork and the narrative are so deeply merged.

Best of all, though Ode to Kirihito is artistically ambitious, it is also completely accessible. Readers intimidated by the author’s legendary status can rest easy in the knowledge that Tezuka is revered not just as a pioneer but as a powerful storyteller, and good storytelling is good storytelling, regardless of its origins.

Newly re-released by Vertical in two digestible volumes, Ode to Kirihito is a remarkable example of the power of sequential art.