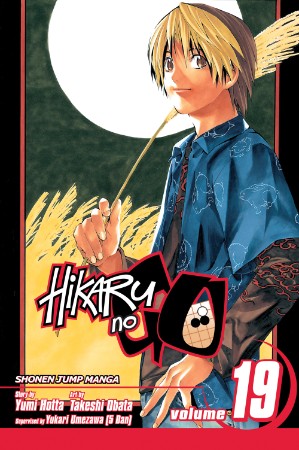 With Hikaru’s pro career now in full swing, he’s anxious to begin competing with high-level players, but his early string of forfeits has put him behind. When an 18-and-under international team tournament is announced, Hikaru is determined to earn a place on the Japanese team. With Akira already selected, only two spots remain. Can Hikaru live up to his own expectations?

Though the end of volume seventeen felt very much like a series climax, volume nineteen demonstrates the series’ true strength as it takes Hikaru and Akira past the consummation of their epic rivalry and on to the rest of their lives as professional Go players. This volume’s lesson is that life is a string of new beginnings–that the completion of each challenge naturally leads to the next one. “I’ll take it one step at a time and keep advancing until I attain the divine move,” Hikaru says, in the heat of a typical battle with Akira. This is not just Hikaru’s lesson, however. Akira, Waya, Isumi, the Haze Junior High Go Club–even the older, more jaded players have no choice but to move on from challenge to challenge.

This may seem like a heavy-handed lesson, but careful detail and subtlety keep all potential preaching in check. As always, Hotta’s characterizations are wonderfully nuanced, and it’s the small moments that do the real heavy lifting. Even as Hikaru makes grand declarations in true shonen style, it’s his mother’s late-evening excursion to to replace the bathroom light bulb that somehow brings the message home. Life moves on for all of us, and so we must move with it.

On an unrelated note, with the senior members of the Haze Go Club moving on to cram school and high school entrance exams, this seems the time to mention just how many Manga Bookshelf Brownie Points this series has earned for having a non-skinny, non-conventionally attractive young female character who is portrayed as smart, athletic, and generally to be admired. Though Kaneko is likely to fade from this story as Hikaru moves further and further from his former middle-school life, she’s provided a real breath of fresh air as a decidedly stocky teenaged girl in a medium (and genre) heavily influenced by the same narrow standards for female beauty that pervade most First World popular culture.

With four volumes left to go, this series shows no sign of losing momentum. More importantly, it retains the unexpected elegance that has long made it a standout in its genre. Highly recommended.