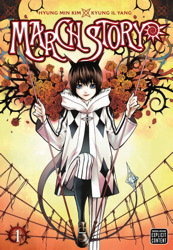 The big news this week comes by way of ANN, who reported on Tuesday that Simon & Schuster lists an October release date for March Story, a series created by Korean manhwa-ga Kyung-Il Yang and Hyung-min Kim for the Japanese magazine Monthly Sunday GX, to be published here by Viz Media.

This news is unconfirmed at the time of this writing, but the prospect of seeing some Korean creators published by Viz is admittedly pretty exciting, even if they are coming to us via Japan. Check out the article from ANN for details about the series and its creators.

With a view towards lightening your pocketbook, RightStuf is having a Bargain Bin Blowout sale, featuring manga and anime up to 95% off. The sale includes volumes of a couple of manhwa series–the original printing of Full House from now-defunct Central Park Media and the first two volumes of Tokyopop’s The Tarot Cafe. Grab them up while they last!

In other manhwa talk, at ComicBitsOnline, Terry Hooper asks, So Where Was This Manhwa Invasion?? Also, at the Star-Bulletin, Jason Yadao discusses two takes on classic series, including Son Hee-joon’s Dorothy of Oz (Udon Entertainment).

It’s a rich week for reviews, especially with Ed Sizemore weighing in on volume one of One Fine Day (Yen Press) over at Comics Worth Reading and Michelle Smith on the first volume of There’s Something About Sunyool (NETCOMICS) at Manga Recon.

Elsewhere, Connie takes a look at the third volume of 13th Boy at Slightly Biased Manga and Eric Robinson continues his marathon of Black God (Yen Press) at Manga Jouhou with reviews of volumes six, seven, & eight. Also, at Anime Maki, Todd Douglass posts a rather baffling review of volume ten of One Thousand and One Nights, in which he attempts to review the penultimate volume of the series without (apparently) any knowledge of what happens in earlier volumes–an interesting challenge indeed.