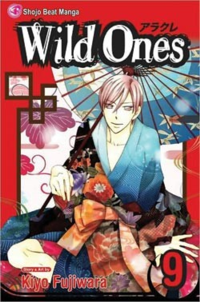 Having finally agreed to speak to the father who abandoned him so many years ago, Rakuto is confronted with the possibility that he may eventually have to leave Sachie’s side in order to make peace with his own past. Meanwhile, Azuma is determined to let Sachie know how he feels, whether Rakuto is ready to play his part or not. Who does Sachie truly love? Has this ever been in question? If so, this volume provides an answer at long last!

Finally the series’ romantic tension is resolved, exactly as it was certain to be from the beginning. Some formulaic romances are enjoyable to read simply because they are so predictable. With these stories, the charm is in the writing, and watching their familiar scenarios play out is, frankly, comforting and downright delightful. Unfortunately, this is not one of those series. Though the couple in question are undeniably sweet, their relationship is so labored and so painfully drawn out, one finds oneself wishing something truly shocking would happen (a deadly plague? an alien invasion? ) just to break up the monotony. With its unbelievable premise and its terminally clueless lovers, this series seems determined to remain lifeless until the end.

Well, almost, anyway. To be fair, this volume’s final pages are honestly sweet, and may even evoke tears from desperate readers grateful for a bit of romantic satisfaction. It may not be an alien invasion, but long-time readers are at least assured some payoff.