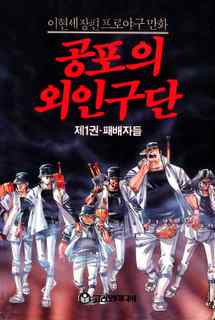 Welcome to another Manhwa Monday! First, an apology. I’ve been horribly remiss. Though fellow manhwa fan, Eva Volin, alerted me at least two weeks ago about an upcoming exhibition on manhwa at the main branch of the San Francisco Public Library, I failed to report it here.

Though the exhibit, “Korean Comics: A Society Through Small Frames,” continues through June 13th, it’s already too late to catch one of its accompanying lectures which took place on March 17th. Fortunately, reader Sara K. attended and was kind enough to write out her recollections of the event in a comment to last week’s post. Many thanks to Sara for sharing her report!

Another related event, Manhwa for Girls will take place on Thursday, April 8th, featuring discussion of “the role of girls and women in comics as well as comics by women artists.” Since I’m stuck over here on the east coast, if you’re in the San Francisco area and plan to attend, I’d love to hear about it!

While we’re learning, this article from ComicBitsOnline popped up in my weekly Google alerts, which appears to be a reprint of a year-old interview with Seoul Graphics’ Dr. Jeeyeon Kim, conducted by Nicholas Yanes for SciFi Pulse. In the interview, Dr. Kim discusses her work on the English edition of Eun-yeong Hong’s Classical Mythology: A Graphic Novel Series, as well as Korean comics in general.

In other news, Anime News Network reports that Sooyeon Won’s popular manhwa series Full House (currently available online from NETCOMICS) is being adapted into an animated 3D film to be released simultaneously in South Korea and Japan. Full House has already been adapted as a live-action television series in Korea.

There are only two reviews to check out this week. At Panel Patter, Rob reads volume two of Bride of the Water God (Dark Horse) . Meanwhile, at Manga Jouhou, Susan S. takes a look at volume three of Very! Very! Sweet (Yen Press).