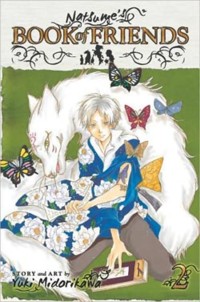 In this volume, Natsume is coerced into attending a school-sponsored “haunted challenge,” only to discover that one of his classmates (who suspects his abilities) wants his help to communicate with a yokai . Next, he falls prey to a curse that he can’t break without supernatural assistance. Later, he meets another human with his abilities and also becomes possessed by a yokai with a final, desperate wish.

Though this volume focuses less on Natsume’s quest to return all the names in the “Book of Friends,” that’s actually not a bad thing at all. Each of the chapters in this installment of the series is more touching than the last, which is saying a lot considering that the first chapter begins with Natsume pouring water on a dehydrated yokai collapsed in the middle of the road.

Unlike his grandmother, Reiko, Natsume is slowly developing bonds with his fellow humans, but he’s also forging relationships with yokai that are much more genuine than Reiko ever bothered with. While she ruled over yokai with the power of the Book, Natsume reaches out to them with genuine affection, struggling to understand how the yokai‘s wants and priorities might differ from his own. This deceptively simple lesson in learning to value things outside one’s own experience is subtly and effectively presented, with the same gentleness that has characterized the series thus far. The series’ humor is a highlight in this volume as well, providing much-needed contrast to its forthright sentimentality.

Though the series’ structure is still rigidly episodic, Natsume’s character development is satisfying enough to easily keep up the story’s momentum. Natsume’s Book of Friends remains one of this year’s best shojo surprises!