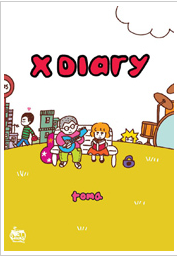 Greetings on another Manhwa Monday! First, a bit of news I picked up from Variety, NETCOMICS will be producing a film version of the manhwa series X Diary by Toma. According to the article, casting will begin in June of this year (with filming beginning in October). The film is being produced by NETCOMICS’ VP Soyoung Jung.

In a review from The Comics Journal earlier this year, Adam Stephanides writes, “X Diary is a feather-light collection of humorous four-panel strips — I would call them gag strips, but “gag” is too strong a word for the gentle humor here — about Mingo (female) and Jerry (male), a pair of 26-year-old ex-lovers who have decided to remain friends … X Diary is unpretentious, and there is a genuine warmth to both the writing and art. It could perhaps best be described as likable.”

For those interested in seeing for themselves, X Diary is available in print from NETCOMICS in a single volume. You can also read it for free in its entirety at NETCOMICS.com. Toma’s other work includes Small-Minded Schoolgirls, one of my favorite series currently running at NETCOMICS.

Speaking of live action made from manhwa, JinraIlustrisimo at Ningin has posted a Top 5 favorite manga/manhwa turned live action, including two of my favorite manhwa, Full House (NETCOMICS) and Goong (Yen Press).

Back to the printed page, the folks at wordcandy.net feature two manhwa series from Yen Press that have come to a close this month, You’re So Cool and The Antique Gift Shop. I admit I don’t share their opinion of You’re So Cool, but I’ll save that for my own upcoming series review.

In reviews this week, Manga Recon has the most going on, with reviews from Jennifer Dunbar of both volume one of Time and Again (Yen Press) and volume three of Sugarholic (Yen Press). Senior Editor Michelle Smith also weighs in with a review of volumes two and three of Sarasah (Yen Press).